Still imagery shows the aircraft taking off. One major difference is the configuration of the aircraft’s twin canted tail. Produced by Shenyang Aircraft Corporation, the FC-31 features a cropped tail, whereas the first prototype designated J-31, had a nearly triangular tails with a horizontal top.

A brief, grainy video purported to be of the flight also indicates that the engines are not smoking. The J-31 that performed during Airshow China in Zhuhai in 2014 was notable for the exhaust produced by its pair of Klimov R-93 engines. This is the same powerplant used in the single-engined Chengdu/Pakistan Aeronautical Complex JF-17, which is also notable for engine exhaust. 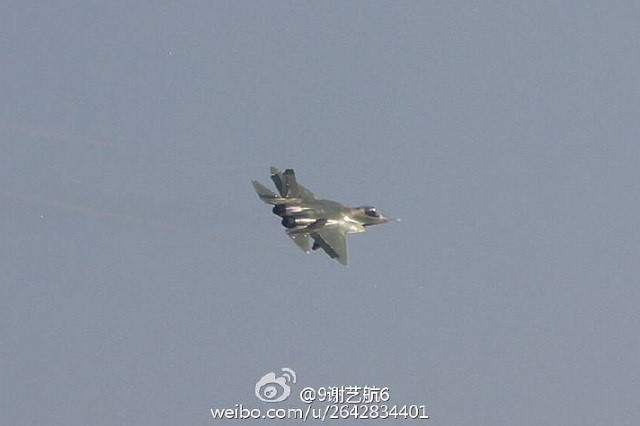 The status of the FC-31 is not clear. The J-31 did not appear at the 2016 Zhuhai air show, although a large model was displayed in the hall, near an “advanced avionics concept cockpit” with a sidestick controller, conventional heads up display, and large multi-function touch screen display.

AVIC held a surprise media briefing about the type at the Dubai air show in 2015, which appeared to mainly be a call for financial backing. It held no media briefings related to the FC-31 at this year's Airshow China, and AVIC officials declined to discuss the aircraft.