Czech air force looks to the future with enhanced Gripens

Ten years on from the introduction of its leased fleet of Saab Gripen fighters, the Czech air force’s 211 Sqn has hit its stride with the provision of round-the-clock domestic air defence cover, and additional participation in some NATO activities beyond the nation’s borders.

Prague’s original lease agreement – contracted in April 2004 – covered the provision of 14 aircraft and spare parts, with the fleet to deliver a combined annual total of 2,100 flight hours. Sweden would also deliver training for 21 Czech pilots and 69 technicians at its Såtenäs air base under the deal, although a subsequent agreement increased the former total to 36.

Under a deal extension signed with the Swedish Defence and Security Export Agency (FXM) last May, the Czech Republic will continue to operate its 12 Gripen Cs and two D-model trainers until 2027, with an option to extend this by a further two years. The follow-on agreement is for the same number of flight hours per year, but was reached at a price reduction of around 30% against the first award.

Operated from the Czech air force’s Čáslav air base, the service’s Gripens have now logged almost 20,000 flight hours since the first was delivered in April 2005, says 211 Sqn pilot Capt Jiri Cermak. The unit currently has 14 qualified pilots, while around 10 more currently assigned to other roles also maintain currency on the type. 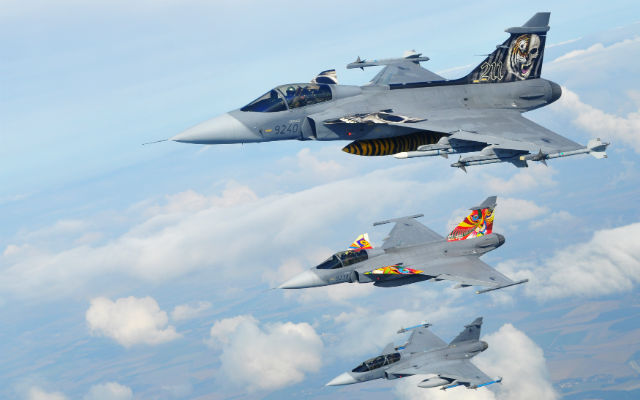 Gripens have provided quick reaction alert (QRA) cover for the Czech Republic since July 2005, when they replaced its air force’s aged RAC MiG-21 interceptors. Two pilots and three aircraft are kept at 15min readiness to launch, with their pilots permitted only to perform the visual identification of suspicious aircraft.

The Czech-operated aircraft currently use Saab’s MS19 Block 3 software standard. Their enhancement to the MS20 configuration, which will enter Swedish air force use later this year, is expected in 2017 or 2018. The manufacturer received a SKr576 million ($69.3 million) contract last December linked to the modernisation activity for Prague.

Hardware upgrades will include the acquisition of a new laser designation pod (LDP) and air-to-surface weapons, with the potential to also add the Diehl Defence IRIS-T and MBDA Meteor air-to-air missiles.

“The need for the LDP is really strong, and right now there is a negotiation,” Cermak said at Saab’s Linköping production facility in Sweden late last month. The payload will assist pilots with the visual identification of aircraft at night, he adds.

Beyond guarding the Czech Republic’s airspace, 211 Sqn has twice participated in the NATO Baltic Air Policing mission, making four-aircraft detachments to Šiauliai air base in Lithuania during 2009 and 2012. Five of its aircraft also spent three months on deployment to Keflavík airport in Iceland from October 2014 as part of a training commitment, making their way to the nation with the support of an Italian air force Boeing KC-767 tanker. Parliamentary approval was recently given to make a similar contribution to NATO next year, most likely at the latter location.

In a move that will further strengthen the Czech air force’s ability to operate with other nations, the unit at Čáslav is hosting the multinational Lion Effort exercise between 11 and 22 May. The manoeuvres are due to include around 28 aircraft, with Gripens visiting from Hungary and Sweden, and pilots from fellow operator the Royal Thai Air Force are also expected to fly with their Czech counterparts using the latter’s trainers. Czech air force Aero Vodochody L-159 advanced light combat aircraft will also participate.

Such co-operation – along with 211 Sqn’s participation in NATO Tiger Meet exercises – plays an important part in developing the Czech Republic’s ability to work alongside its allies. And if the wishes of its current air force commander are advanced, this commitment could even grow, through the potential introduction of another six to eight Gripens.

While political support would be required to fund such an investment, Cermak says the nature of the nation’s long-term agreement with Sweden’s FXM body gives the air force long-term stability. “As we have fixed flight hours, we don’t get cut when there is a budget squeeze.”

The Czech Republic and neighbouring Slovakia are also investigating the potential for increased co-operation in the QRA arena, as the latter nation moves towards also fielding the Gripen. A future agreement to work more closely could include the Czech air force providing some training services for Slovak pilots, following their receipt of initial instruction in Sweden.

“We are ready for that,” says Cermak of the potential pact, adding: “It depends on the Slovak decision.”