Italy will increase its planned purchase of Boeing KC-46A Pegasus aerial refuelling tankers to six aircraft, up from two previously.

Rome had in its multi-year defence spending plans, released in early 2022, indicated that it would purchase a pair of Pegasus tankers and upgrade its air force’s four current KC-767A assets to the latest configuration. 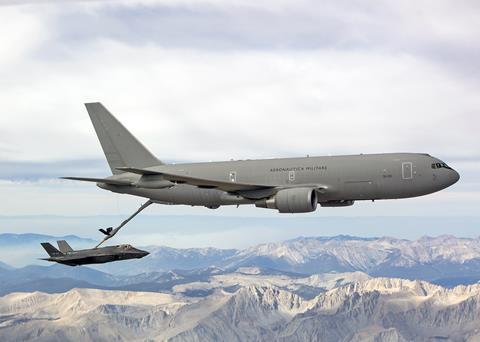 That would, it said, improve commonality for crews, maximise aircraft availability and reduce operating costs.

However, the country’s Armaereo procurement body has determined that such a plan would be impractical.

In its report assessing the feasibility of the strategy – entitled “Renewal, enhancement and integrated logistic support [of the] air force heavy multirole tanker fleet’ – it concludes that “the only feasible technical solution to ensure commonality” would be the acquisition of six KC-46As.

Although the report refers to these aircraft as the “KC-767B”, this appears to be Italy’s planned designation for the new type, which is currently being delivered to the US Air Force.

Italy should also attempt to sell the existing KC-767As back to Boeing in part-exchange for the new aircraft, it adds.

While the new Pegasus tankers and a logistic support package would be directly acquired from Boeing, the report says, additional items such as data links, mission planning systems and a self-protection suite would be purchased through the US government’s Foreign Military Sales process.