The UK Royal Air Force (RAF) has received the last of its nine Boeing P-8A Poseidon MRA1 maritime patrol aircraft, with the twinjet having landed at its Lossiemouth base in Scotland on 11 January. 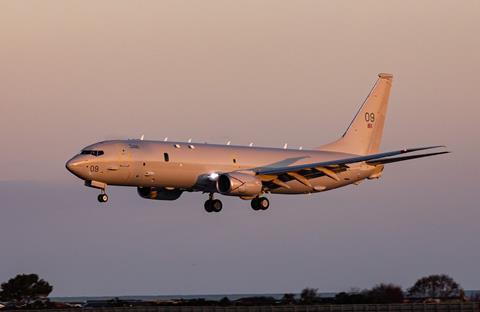 Boeing delivered the RAF’s first P-8A to its Kinloss base in February 2020, with the service declaring initial operational capability with the type just two months later. Poseidons were temporarily operated from the site while infrastructure work was being completed at nearby RAF Lossiemouth.

Flown by the RAF’s 120 and 201 squadrons, the 737NG-based type represents a successor capability for the retired British Aerospace Nimrod MR2 maritime patrol aircraft fleet, which left use in 2010.

Boeing Defence UK is under contract to support RAF operations with the Poseidon, with around 200 of its employees to deliver maintenance, training and support.

The Lossiemouth base also will in the future be home to the RAF’s fleet of three 737NG-based E-7A Wedgetail airborne early warning and control system aircraft. “The first two [are] currently undergoing modification in Birmingham”, Boeing says, with this work being performed by STS Aviation Services.