The incident occurred at midday on 4 January, with the aircraft conducting the belly landing at Seosan air base, 81nm (151km) south of Seoul, according to South Korea’s official Yonhap news agency. 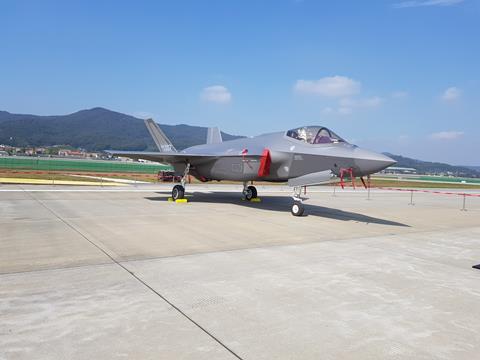 The report, citing sources, indicates that the pilot walked away after the fighter landed on a runway that had been coated with foam. The incident appears to be the first belly landing involving an F-35.

This the second major safety incident involving an F-35 operator in the Asia-Pacific region. In April 2019, a Japan Air Self-Defense Force F-35A crashed into the northern Pacific Ocean, killing the pilot.

The crash resulted in an unsuccesful search to recover the missing jet. Ultimately, it was concluded the pieces of the missing jet would not make their way in to the hands of Beijing or Moscow.

The F-35A entered South Korean service in December 2019. Cirium fleets data indicates that its air force has 32 examples in service, with eight on order. In October 2019, Seoul’s Defence Acquisition Program Administration earmarked W4 trillion ($3.3 billion) to obtain 20 additional fighters from 2021, which would bring the fleet to 60.

Separately, the US Marine Corps (USMC) celebrated a milestone with the aircraft carrier-capable F-35C, with the service’s first deployment of the type aboard a carrier, the USS Abraham Lincoln.

The USMC’s VMFA-314 squadron has already conducted flight operations on the vessel, which is deployed in the Pacific.

“Our ability to operate the F-35C in the Pacific greatly increases the Marine Corps’ naval expeditionary force capabilities by providing us the capacity to employ the most advanced electronic warfare capabilities on any aircraft today in support of fleet operations,” says VMFA-314 commanding officer Lieutenant Colonel Brendan Walsh.

“In addition, having this asset available greatly increases the Marine Corps’ ability to provide security to our allied nations and preserve a free and open Indo-Pacific.”

US Navy F-35Cs commenced carrier operations when Strike Fighter Squadron VFA-147 deployed with the USS Carl Vinson in April 2021, also in the Pacific.