Russia’s most advanced fighter, the Sukhoi Su-57, has conducted combat operations against targets in Ukraine – albeit from considerable ranges.

According to UK Defence Intelligence, Moscow has “almost certainly” operated the stealthy type against Ukraine since at least June 2022. 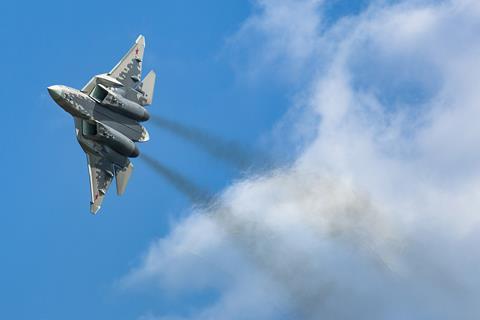 It contends, however, that Russian Aerospace Forces have used the aircraft mainly for long-range, stand-off strikes, apparently out of concern for an Su-57 getting shot down over Ukrainian territory.

It also provided an open-source satellite image showing Su-57s at Akhtubinsk air base, where the 929th Flight Test Centre is located.

“Russia is highly likely prioritising avoiding the reputational damage, reduced export prospects, and the compromise of sensitive technology which would come from any loss of [an Su-57] over Ukraine,” says Defence Intelligence.

“This is symptomatic of Russia’s continued risk-averse approach to employing its air force in the war.”

A major surprise since Russia’s invasion of Ukraine in February 2022 is the relatively poor showing of its air force, which is apparently unable to secure aerial supremacy against a far smaller foe. It has also proven ineffective at providing close air support to Russian forces, and has largely restricted itself to attacking fixed civilian targets at extended ranges. 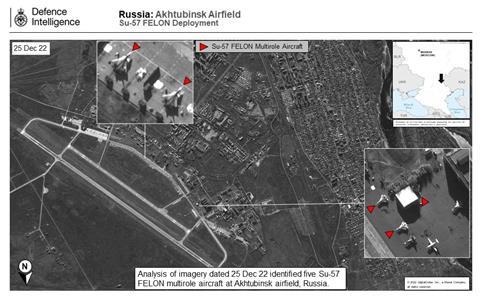 According to a November report by the Royal United Services Institute, Russian airpower has been stymied by the resilience of Kyiv’s air defence network.

Any Russian fears about losing a stealthy Su-57 – which in theory is capable of penetrating air defences – are probably warranted given the West’s equipment support for Ukraine.

On 6 January, the US government announced a $3 billion arms package, which it said will include a range of equipment for ground forces, as well as “anti-aircraft capabilities including RIM-7 missiles and 4,000 Zuni rockets”.

Ukraine claims to have downed 283 fixed-wing aircraft and 270 helicopters since Russia’s invasion on 24 February 2022.

While this is likely an exaggeration, Russian losses have been significant. In September 2022, US Air Force General James Hecker reportedly said that up until that month Russia had lost 55 aircraft.