The US Congressional Budget Office (CBO) reports that both availability rates and flying hours have declined for the US Air Force (USAF) and Department of the Navy (DoN) over the last two decades.

From 2000-2020, availability rates for all aircraft across both the USAF and DoN (which includes the US Navy and US Marine Corps) fell from around 60% to the 40-50% range, says the CBO. The decline in DoN availability rates was more pronounced, hitting just 40% in 2019. 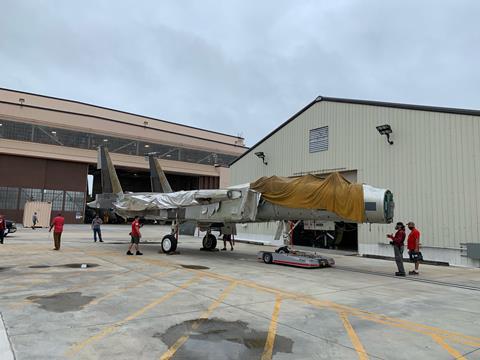 Flying hours per aircraft have also fallen over the last two decades, with a sharper decline during the coronavirus pandemic in 2020. DoN flying hours declined from around 350h per aircraft per year to around 300h, while USAF flying hours fell from just under 300h annually to 250h.

For the DoN, the CBO looked at fighter types such as the Boeing AV-8B, Northrop Grumman EA-6B, Boeing EA-18G and F/A-18, and the Grumman F-14. USAF types included the Fairchild-Republic A-10, Boeing F-15, Lockheed Martin F-16, and F-22. The Lockheed F-35 was not analysed because the data sets the CBO used did not accurately reflect the type’s availability.

“Since 2012, the availability rates of DoN fighters and attack aircraft have fallen well below the air force’s rates,” says the CBO.

The DoN’s numbers were particularly affected by the F/A-18 C/D, a type retired by the navy, but still in service with the Marines. Delays in high flight-hour inspections, which also include actions to extend the type’s operating life, affected its availability over the survey period.

The CBO adds that it used a somewhat stricter measure to assess “availability” than that used by the US Department of Defense (DoD). The CBO’s measure looks at all aircraft, including those in storage or receiving depot level maintenance, while the DoD measures only the availability of aircraft with operating units.