US firm Iomax joins a host of other light attack aircraft producers at the Dubai show, with its Archangel – a modified Thrush Aircraft S2R-T660 turboprop – on display in the static park. 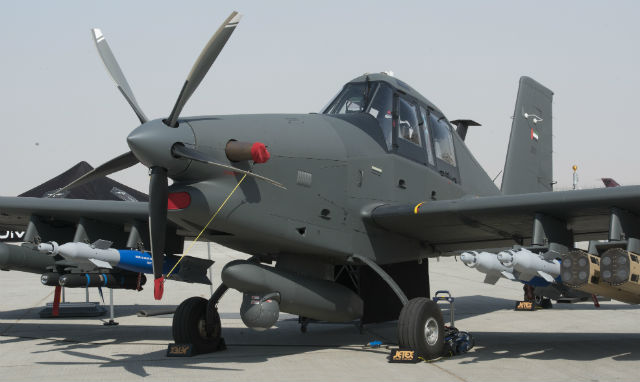 Operated by the United Arab Emirates air force, the example on show is one of a total of 24 Archangels ordered by the service.

It features seven hardpoints, carrying laser-guided bombs, a countermeasures dispensing system, anti-tank missiles and an electro-optical sensor. It does not, however, have a gun, as it is optimised to operate at 16,000-25,000ft, making such a weapon impractical.

It is also equipped with a glass, two-man cockpit. “This is no crop duster cockpit,” says Lee Moritz, Iomax marketing director. It is targeted at the anti-insurgency mission, he says.

Prior to the Archangel deal, Iomax had adapted 24 Air Tractor AT-802Us crop spraying aircraft for the UAE, of which six were subsequently transferred to Jordan.

The aircraft on display is a sister ship to the Archangel shown at Paris in June.