Redemption is not a word often associated with the introduction of new aircraft models, but the entry into service of the 787-9 nearly two years ago was anything but a typical event.

The stretched and updated widebody followed nearly three years after the operational debut in October 2011 of the 787-8, the only commercial airliner ordered grounded by the US Federal Aviation Administration since 1979.

In addition to lofty promises for cutting fuel bills and expanding networks, the 787-9 would be especially scrutinised for the reliability of its systems and components. With more than 80% commonality with the 787-8, the debut of the 787-9 with Air New Zealand in October 2014 would answer the question of how much Boeing’s more electric- and software-intensive design had matured in three years. It might even redeem Boeing’s tarnished reputation from the highly public teething pains suffered by the 787-8.

Interviews with several of the 787-9’s earliest operators reveal that Boeing indeed made progress, but customers are still not satisfied with the reliability of the aircraft. Nor, for that matter, is Boeing.

“We’re never satisfied with where it’s at,” says Mike Fleming, Boeing’s vice-president of 787 support and services. “We’re always going to be driving harder. But you have to put that in context. On the 777 it took us over five years to get the airplane over 99% [dispatch reliability]. It’s been over four years and we’re right about 99% [on the 787]. That’s consistent with where the 777 was at the same point in time of its EIS.”

By all accounts, the 787-8 entered service before the flight control software and several major components of the electrical system were mature. The troubled introduction for a pair of powerful lithium ion batteries caused more grief, when the FAA grounded the fleet for four months in 2013 following two incidents of uncontained, venting battery cells. The 787-9 inherited the reliability improvements made to the common elements of the type’s software and hardware when it entered service two years ago.

But the type is still addressing reliability problems with key systems. The spoiler electronic motor control units (EMCUs) damaged the type’s reliability statistics at entry into service nearly five years ago, and remained a problem on the 787-9 until recently. A fix has been installed on the production line and a service bulletin will be released in August to retrofit the fix across the fleet, Boeing says.

“We’ve made some improvements, but we’re not where we want to be yet,” says Fleming. 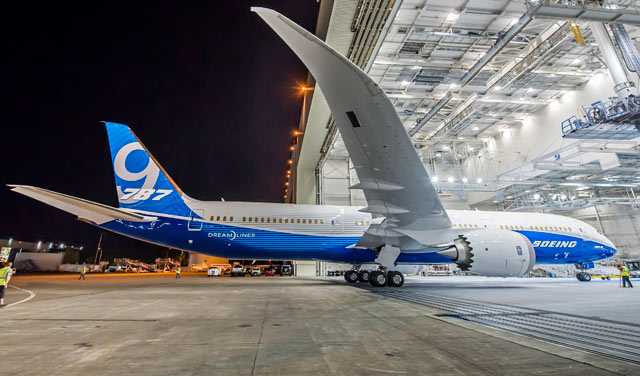 New size, new livery, many of the same problems

The electrically-signalled brakes on both the 787-8 and the 787-9 are still causing trouble. “We have two brake systems suppliers. One's system is working well. The other is in the process of making improvements,” says Mark Jenks, vice-president and general manager of the 787 programme.

The 787’s general processing modules — a collection of 16 data processors that form the brains of the aircraft’s common core avionics architecture — are also performing below acceptable reliability levels, Jenks says. “There are hardware issues that we’re dealing with,” he says.

The 787-9’s customers remain broadly unsatisfied by the type’s reliability. LATAM Airlines, for example, is operating 787-8s and the stretched model. In late 2014, the carrier’s 787-8 fleet averaged 98.3%. The fleet reliability improved to more than 99% after incorporating several service bulletins last year, but recently dropped to 98.4% across the 787-8 and 787-9 fleets.

After receiving 12 787-9s over the past 14 months, the stretched model’s reliability is still trailing the level of the 787-8 by about 1 percentage point, the source says.

“At the moment, there are still some unresolved issues for the 787-8 that have been replicated in the 787-9. There are also a few 787-9-specific issues that have affected our performance numbers, given the amount of deliveries,” the LATAM source says. According to Boeing, however, the specific fleet reliability levels for both types operated by LATAM is the same.

Japan Airlines, which also operates a mixed fleet of 787-8s and 787-9s, says the high degree of commonality between the two types means reliability levels are similar, but also unsatisfactory.

“It is still under our expectation but getting better steadily,” the airline says. The company’s goal for 787 fleet dispatch reliability in 99.5%.

Having received its first 787-9 from Boeing 18 months ago, Singapore’s low-cost airline, Scoot, has taken a patient approach to fleet reliability expectations. A new fleet type “takes about four years on average to reach its full potential”, Scoot says. “We have seen that improvement over time and while dispatch reliability is currently 1 percentage point away from our 777 average, the gap is closing well.”

All Nippon Airlines launched service of both the 787-8 and 787-9. Although Air New Zealand was the first operator to take delivery of the stretched model in July 2014, ANA managed to deploy the 787-9 on the first revenue-carrying flight a month later. ANA bore the brunt of the type’s early teething troubles, but has steadfastly supported the aircraft. In late 2014, ANA reported the highest reliability levels of any airline operating the 787-8, at 99.5%. Asked to comment about the current reliability of the 787-9, ANA responded that the fleet average remains 99.5%.

Absent from the raw statistics is perhaps some perspective on the scale of the reliability on the 787-9 compared with the introduction of the smaller model.

As Boeing introduced the 787-8, glitches in the flight control software required two or three major updates within the first six months. Other major components of the electrical systems, such as the variable frequency starter/generators, evolved with several design changes, so airlines logged serial numbers with a “-2, -3 and -4” on the end as each update was released. As each improved piece of hardware arrived, it required a laborious process of removing and replacing the older component.

The pace of those major software load releases and hardware changes slowed by mid-2014, when the 787-9 arrived into service. Software updates are now released on a roughly annual schedule, says Jenks.

Boeing also tracks the rate of new problems being discovered on all of its aircraft types. The 787 is now 2 percentage points below the rate of mature aircraft, Jenks says.

The GS Yuasa battery design that caused the grounding order in 2013 also appears to be holding up in service. Boeing retained the cobalt-dioxide chemistry and the basic arrangement of eight cells rated nominally at 32V, but redesigned the installation. The cells were thermally insulated with ceramic shields placed between them. That battery experienced one known venting event in January 2014 on a Japan Airlines 787-8, which revealed Boeing’s new containment system worked as designed.

“The customers don’t talk about it anymore,” Fleming says.

Moreover, Jenks says, the lithium ion battery in the 787 is now statistically more reliable than conventional nickel cadmium batteries found in most other aircraft.

Ultimately, the 787-9 was designed to lower airline fuel bills on some of the longest routes in their network. By incorporating a hybrid laminar flow control device, the 787-9 extends the aerodynamic advantage of the aircraft’s high-aspect ratio, flexible wings. Boeing also added three take-off flaps positions to the high-lift configuration on the 787-9, which reduces the runway length requirement and improves the climb-rate just after take-off.

Opinions on the fuel burn reduction achieved by the 787-8 vary greatly depending on the airline, with LATAM reporting a 12% improvement, or less than half the reduction claimed by Air Canada. The reporting on the 787-9 fleet yielded a consistent improvement of at least 20% over previous widebodies in the same class.