FARNBOROUGH: Breakthrough CSeries gets ready for a 'flawless' EIS

Developing the Bombardier CSeries family from a paper concept to a certificated aircraft eight years later proved to be a typically dramatic experience for an innovative, technologically ambitious airliner, punctuated by moments of soaring achievement but also many painful and costly setbacks.

As both the CS100 and the CS300 enter service over the next six months, Bombardier is focused on leaving the drama of the development phase in the past, allowing launch customers Swiss and AirBaltic a smooth and reliable transition into revenue-collecting operations.

“The summer months are going to be very busy for us,” says Todd Young, vice-president and general manager for customer services at Bombardier Commercial Aircraft.

Since 2013, in fact, a string of Bombardier executives have used the word “flawless” on nearly every reference to the company’s goal for the entry-into-service process of first the CS100 on 15 July and the CS300 after September this year. That certainly sets a lofty goal for a modern airliner. In any standard word association analysis, “entry-into-service” and “flawless” should rank among the terms least likely to be paired. Whether it was Boeing’s troubled debut of the clean-sheet 787 or Airbus’s recent struggles with the Pratt & Whitney-powered version of the re-engined A320neo, all of the resources of the industry’s two largest and most sophisticated manufacturers were not enough to lift the entry-into-service process into the category of “flawless” achievement. 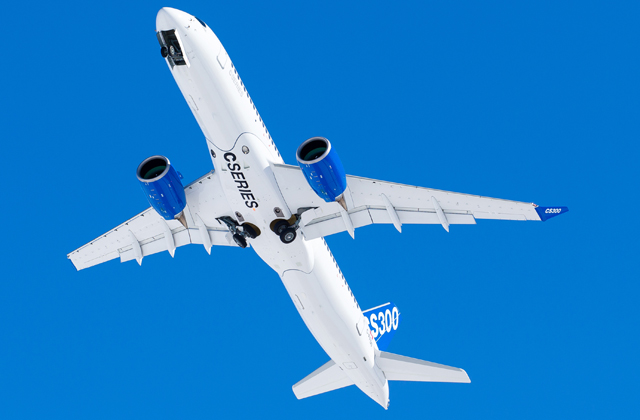 The airframer aims to minimise disruption from "teething" issues

Moreover, Bombardier’s engineers designed a highly competitive aircraft infused with innovative technology. Most of the aircraft structures not formed from a novel aluminium-lithium material are made from an even more unique blend of carbonfibre reinforced plastic. Aircraft control and stability is provided by the largest application of a full fly-by-wire system designed by Parker Aerospace. The A320neo launched revenue service in January for the P&W PW1100G engine, and the similarly gear-driven inlet fan of the PW1500G will follow less than six months later on the CS100.

On top of those innovations, Bombardier has wired the aircraft to collect and analyse volumes of data on the condition and performance of the many systems and structures in service. Eventually, this information could transform the cost of maintaining a modern airliner. In the near-term, however, it risks overwhelming the operators with loads of nuisance alerts driven by unrefined software algorithms, as shown by the similarly-wired 787-8 and the A320neo.

With only weeks left before Swiss launches service from Zurich to Paris with the CS100, Bombardier officials are not backing down from their self-imposed “flawless” objective for the CSeries. But they have clarified how the term should be defined. In this case, flawless does not mean the CS100 and CS300 will escape the “teething” issues common to new aircraft types. Instead, it means that Bombardier will manage those teething problems in a manner that limits any disruptions for the operators.

“We are poising ourselves to be able to respond quickly, very efficiently and effectively to any, any challenges that we may encounter with the aircraft,” Young says. “Our objective is to make sure the aircraft continues to fly to support the objectives of our customer. Meeting scheduled completion is our top priority, and that is our definition of flawless because then they have delivered what they committed to their shareholders and most importantly their customers or passengers.” 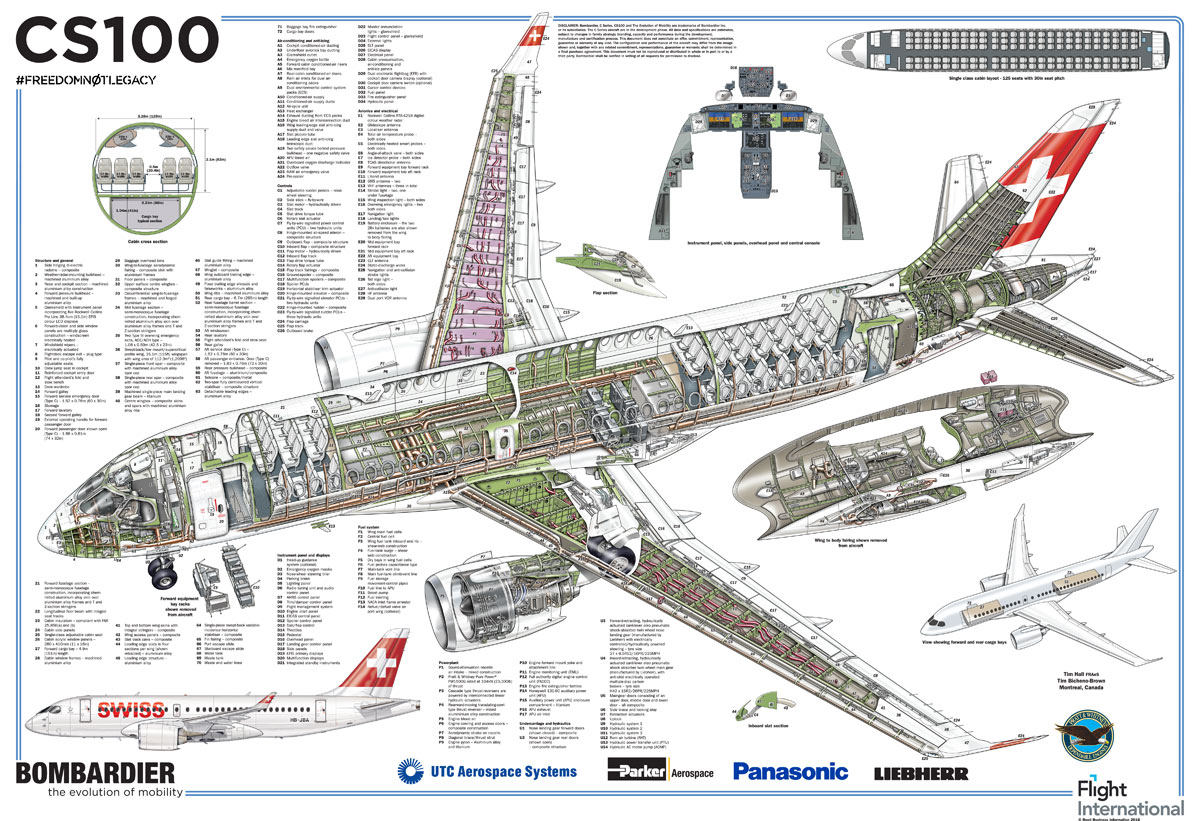 Bombardier’s target for dispatch reliability at entry into service is at least 99%. By contrast, the 787-8 has been in service almost five years and is only now approaching that standard on an average fleet-wide basis. Even if the CSeries’ onboard systems enter service at a higher level of maturity, a 99% reliability objective implies a robust and far-flung support network, ready to respond to any operational issue at a moment’s notice.

“We have a plan that provides a very high level of support to our customers at entry into service. Teams will be deployed to our first customer Swiss and our next customer AirBaltic. These teams have been working basically since the beginning of the programme. We made a conscious decision to embed our service personnel into the flight testing of the airplane.”

In their duty to keep the CS100 and CS300 running on time, Bombardier’s service times will have a helpful new tool. Since electronics entered aircraft, maintainers have always been equipped with thick, paper-bound fault isolation manuals. In recent years, the manuals themselves have transitioned from paper to electronic format, allowing rapid updates across the fleet as new problems arise and new responses are developed.

The electronic fault isolation manual (EFIM) was completed as the CS100 entered functional and reliability testing last November, Young says. These so-called F&R flights allow Bombardier to operate the aircraft in much the same way as an airline would.

“The way the EFIM works, the user would take the squawks – whatever they may be – and the system is a knowledge-based system, so it takes that information and looks for the most probable cause for a particular malfunction or particular discrepancy and then comes up with the most probabe solution to remedy that,” Young says. “Some could be just a maintenance practice. Others could be a component that has failed.”

The manual is the maintainers’ best weapon against the software squawks that so often damage the reliability of other new aircraft types. Among the challenges is limiting the number of “nuisance” alerts flowing to the pilot’s cockpit displays. A nuisance message is an alert for a problem that doesn’t really exist. Sometimes it’s simply an error in the feedback loop as different systems send data back and forth. For the first time in a Bombardier aircraft, the CSeries is wired with an aircraft health management system that tracks thousands of performance and condition parameters every second.

To manage the risk of nuisance messages, the 2.5-year delay to the CSeries’ debut may be an advantage. The extension to the development phase gave Bombardier’s flight test team more experience operating the aircraft and more time to improve the maturity of the systems.

“We have spent a tremendous amount of time flight testing the airplane. We have been able to understand some of the particular avionics messages, data that comes out of the aircraft that may drive a pilot squawk,” Young says. “From that we have been able to put in place a predetermined position or practice so that any in-service event that we may see we already have the ability to respond because we’ve seen it before and we’re able to relay that quickly for the operators.” 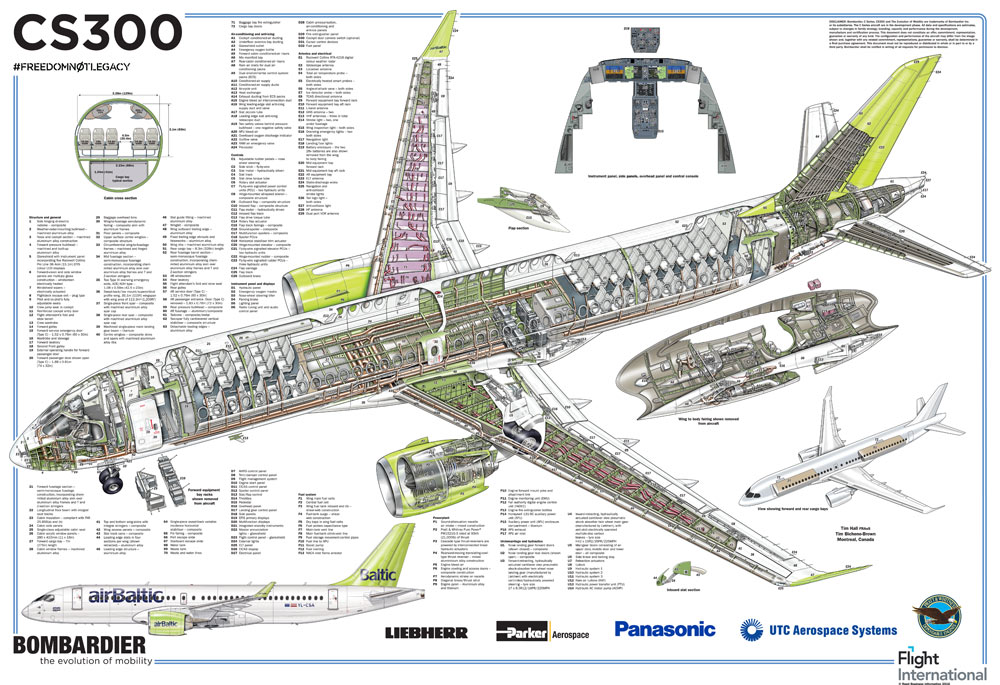 The execution of the control laws in the CSeries borrows elements of the Boeing and Airbus philosophies. In autothrottle mode, the levers are back-driven, as the Boeing fly-by-wire philosophy prefers. But the passive sidestick controllers on each side of the cockpit are decoupled, copying the Airbus approach. “Normal” and “direct” are the only two control modes. In normal law, the Collins computer establishes flight envelope limits for angle-of-attack, load factor, bank angle, pitch angle, and speed. For instance, the envelope limits prevent the aircraft from pitch attitudes and roll angles over 65°. Below maximum operating speeds, the pilot can command a role greater than 30°, but the positive spiral stability feature will roll the wings back to level once the stick is released.

Bombardier plotted a careful path between innovation and conventional technology in the CSeries design. Although a full fly-by-wire control system is a first for Bombardier, other aspects of the CSeries electronics and power systems are conventional, such as nickel-cadmium batteries to provide back-up power for the avionics and the auxiliary power unit versus lighter-weight but less mature lithium ion technology.

UTC Aerospace Systems supplies the electric power generation and distribution system. The system includes the two engine-mounted, variable frequency generators to feed power to the avionics and other loads. Emergency power is supplied by an air-driven electric generator.

The CS100 and CS300 share a common wing that represents one of the major innovations in Bombardier's configuration for the CSeries. The efficiency of the 35.1m-wide aerofoil is partly aided by a signature Bombardier canted winglet at the tip, but its real performance is derived from the composite material.

The CSeries programme marks Bombardier's first foray into designing a composite wing for a commercial aircraft. Researching and developing a process to manufacture the 112m² (1,210ft²) of composite wing area for the CSeries represented the largest investment ever poured into the Bombardier ¬Aerospace-Belfast (formerly Short Brothers) facility in Northern Ireland, including commitment by the UK -government to the tune of £520 million ($814 million).

The Belfast facility developed a unique process combining resin transfer moulding and autoclave curing techniques into a new method called resin transfer infusion. It is a method that fabricates a single-piece wing panel, with stringers and stiffeners integrated in the process rather than bolted on later. After laying up the dry carbonfibre material, the mould is placed in an autoclave. The autoclave applies pressure and temperature as a strengthening resin in injected into the carbonfibre material, curing it at the same time it is formed.

The choice of composite wings was relatively easy for Bombardier because of the weight savings offered by a single-piece design. No such convenient answer presented itself for the fuselage pressure vessel. As with the Global-series business jets, Bombardier decided to use carbonfibre in the aft section and for the Alenia-supplied horizontal and vertical stabilisers. Forward of the aft bulkhead, however, Bombardier decided to use a new and more reliable generation of aluminium-lithium metal.