The tanker connected to the fighter aircraft with its refuelling boom on 22 January, marking the first time the Pegasus has refuelled a stealth aircraft, says the US Air Force. The KC-46A will also have to prove it can refuel the Lockheed Martin F-22 Raptor and Northrop Grumman B-2 Spirit.

Refueling a stealth fighter or bomber is more difficult than a conventional aircraft because the tanker’s boom operator must avoid scratching the stealth coating on the outside of the aircraft. If the aircraft’s special coating is scratched it could increase its radar visibility.

Refuelling an F-35 signifies Phase III of the USAF’s testing of the KC-46. Phase III is the final stage of developmental testing, is planned to last 15 months and is being conducted out of Edwards Air Force Base, California. 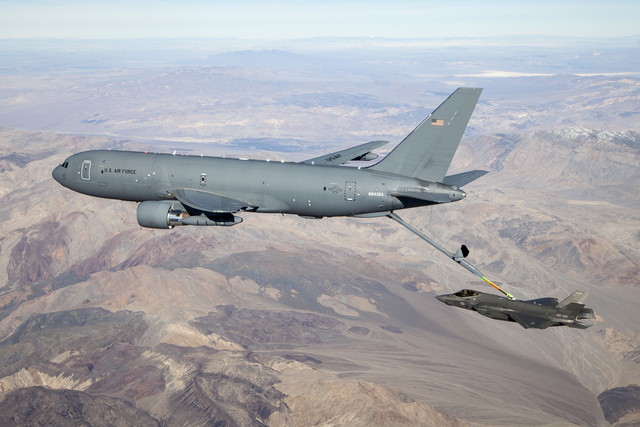 The USAF formally accepted the first KC-46A from Boeing on 10 January after more than a year-and-a-half delay, caused by an assortment of manufacturing and regulatory issues.

The KC-46A has had problems with its remote vision system; a combination of stereoscopic and infrared cameras that provide a 185° field of view behind the tanker and help an onboard operator steer the refueling boom into contact with a receiver aircraft. The remote vision system’s most recent problem is a sunlight glare issue that occurs when the tanker is flying directly away from the sun.

However, Boeing argues that the programme has turned a corner and notes that the system is only impacted by sun glare problems about 3% of the time. Ultimately, showing that the KC-46A can precisely refuel stealth aircraft, such as the F-35, is an important step for reestablishing confidence in the remote vision system.