Leidos is leading a team that is putting forward the Bronco II light attack aircraft as an option for the US Special Operations Command’s (SOCOM’s) Armed Overwatch programme.

The company is to serve as the aircraft’s prime contractor, it says on 4 May. The US subsidiary of South Africa’s Paramount Group, which designed the Bronco II aircraft, as well as MRO and training provider Vertex Aerospace, will serve as subcontractors on the team. 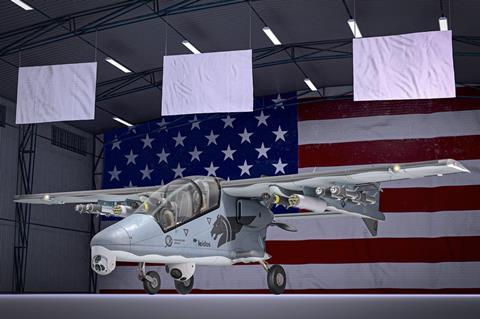 The Bronco II looks similar to its forbearer, the Vietnam War-era North American Rockwell OV-10 Bronco. Both have twin tail booms and a high visibility tandem cockpit, as well as a light attack and reconnaissance role.

The Bronco II was originally named the Advanced High Performance Reconnaissance Light Aircraft. The Paramount Group reportedly started design of the aircraft in South Africa in 2009. It was later rebranded in 2018 as part of an effort to market the aircraft to the US Air Force, which was in the midst of its light attack experiment at the time.

The Bronco II differs from its predecessor in that it has a single pusher propeller on the back of its fuselage compared with a pair of wing-mounted engines. And, the newer aircraft’s cockpit has stadium seating. The Bronco II also has a slightly swept forward wing, compared to a straight wing on the OV-10.

In South Africa, the aircraft is marketed by Paramount as the Mwari. The aircraft has no disclosed operators. In February 2019, Paramount Aerospace Holdings, the subsidiary of Paramount Group responsible for developing the light attack aircraft, reportedly filed for business rescue and shut down its operations. In October 2019, the company reportedly received an infusion of cash to restart operations.

Under the leadership of Leidos, the Bronco II team now plans to build the light attack aircraft in Crestview, Florida.

The Bronco II has six underwing hardpoints for weapons. The aircraft has a modular mission bay in its belly that Leidos says can be swapped out in less than two hours. For instance, depending on the mission, the modular bay could substitute intelligence, surveillance and reconnaissance sensors, signal intelligence electronics, or cargo payloads.

The Bronco II can be broken down and packed into a shipping container. One aircraft can fit inside a Lockheed Martin C-130. Two can be transported inside a Boeing C-17.