Deliveries of the Boeing KC-46A to the US Air Force will rise sharply in the early part of 2019 following the delivery of the first two examples on 25 January, but will eventually level off at three aircraft monthly for the remainder of this year.

Multiple aircraft per month will be delivered over the course of the first few months of 2019, says Mike Gibbons, Boeing KC-46A tanker vice-president and programme manager. Boeing has 12 aircraft that are fully complete and awaiting acceptance by the USAF, he adds. The company is on contract for 52 of an expected 179 tankers for the service.

“For the first few months we believe we will deliver a pretty good number of jets,” says Gibbons. “We don’t have the number nailed down yet.”

Secretary of the Air Force Heather Wilson says that the USAF is ready to begin operational test and evaluation on the aircraft once they reach McConnell AFB in Kansas. The service decided that it could work around lingering sunlight glare issues with the tanker’s refuelling boom remote vision system which have delayed the programme.

“Our engineers and scientists at the Air Force Research Lab at Wright-Patterson [AFB] agree on what the actual visual parameters will be for the revised system, and Boeing has agreed to go ahead and make those changes,” Wilson says. “The system is safe and usable as it is. We just have a few operating workarounds. The best example is you can’t refuel directly going away from the sun.”

Boeing will fix the sunlight glare issue at its own expense and the USAF will withhold some funds until that problem is resolved. 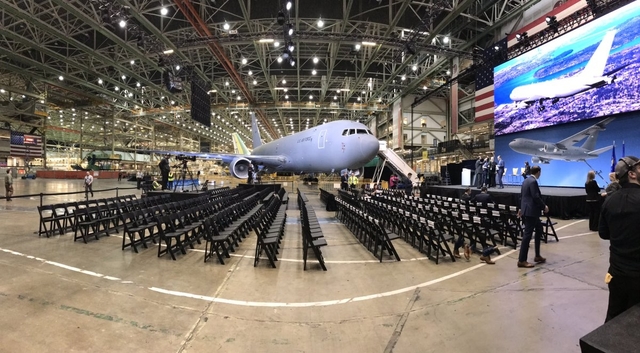 For its part, Wilson says the USAF will take the lead and pay for the first programme change to the KC-46A to redesign part of the aircraft’s refuelling boom.

“The boom meets the international standard that the air force gave to Boeing. But there are a few of our aircraft, particularly the [Fairchild Republic] A-10, that are a very light aircraft and the boom doesn’t disconnect quite as well because its light,” she says. “It’s a fairly simple fix. It’s an actuator fix just to make the boom a little more sensitive for some of our light aircraft.”

The KC-46A is based on Boeing’s 767-2C freighter and is built in the company’s Everett, Washington facility. The air tanker contract was awarded to Boeing nearly eight years ago and has been plagued with production issues that have cost Boeing billions of dollars in cost overruns and delays.

At a delivery celebration in Everett on 24 January, Boeing chief executive Dennis Muilenburg sounded an optimistic note in a speech before USAF officials and factory workers, but also referred to the programme’s struggles.

“The journey over the last several years hasn’t been easy,” he says. “In fact, it’s been hard.”