Northrop Grumman entered full-rate production on the F-35 Lightning II’s centre fuselage at its Palmdale, California facility in May in order to meet increasing order quantities from the Pentagon and international customers.

Situated on the edge of the Mojave Desert in California, the factory -- known as Building 401 on Site 4 of Plant 42 -- supplies fuselages for aircraft final assembly facilities in Fort Worth, Texas; Italy and Japan. An adjacent bay in the same building once was the final assembly site of the B-2A bomber. It sat empty during a media tour of the full facility in December 2015. During the latest tour of Building 401 in mid-June, Northrop officials refused to discuss the secret location of the B-21A bomber assembly site, but the former B-2A bay was walled off and not accessible.

Northrop reached a production rate of a centre fuselage every 1.5 days in the fourth quarter of 2017 and completed a total of 74 last year. 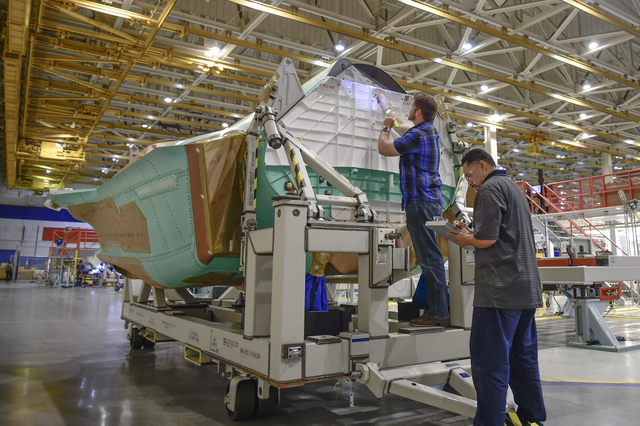 The manufacturer projects that it will complete 113 fuselages this year and it aims to produce 153 fuselages in 2019. At peak production the facility will produce a fuselage every 1.25 days.

To accommodate the increased production Northrop hired 1,000 additional employees at its Palmdale facility between the beginning of 2017 and the end of the first quarter 2018. It also has added new sanding and painting booths.

The company competes for talent with Lockheed's nearby Skunk Works division, which is based across the runway at US Air Force Plant 42 and is in the midst of hiring 1,000 employees this year.

Nonetheless, Northrop said it has not had trouble finding workers for its plant, drawing many employees from Aircraft Fabrication and Assembly programme at nearby Antelope Valley College.