Bell has installed a Tactical Common Datalink on the V-280 Valor tiltrotor, a communications device that can pass back targeting data to precision long-range weapons.

The company conducted demonstrations with the data link in February 2020 at the Bell Flight Research Center in Arlington, Texas, it told FlightGlobal on 15 December. In theory, when paired with certain onboard sensors the data link could be used to pass along information to weapons such as the US Army’s in-development Long Range Precision Fires Missile. 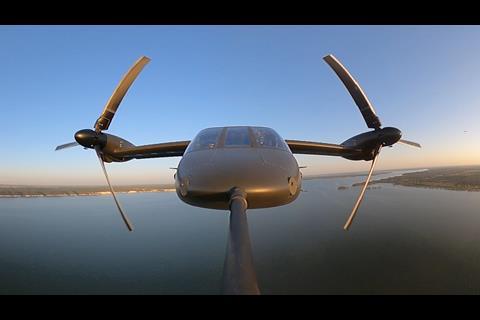 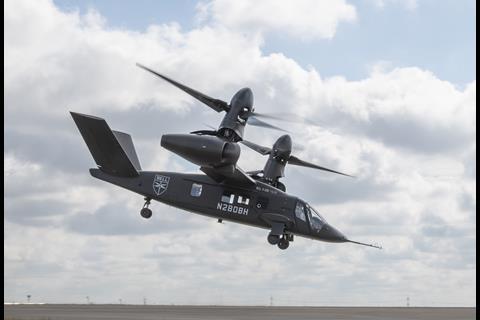 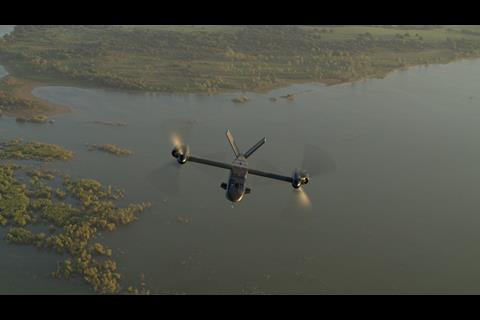 V-280 cruising low along the shore

Bell says it ought to be able to quickly add new sensors to the V-280 because of the aircraft’s open systems architecture. As part of demonstrations in February, the V-280 transmitted information including flight data, such as airspeed, altitude and attitude, to a ground station, it says.

“[The Tactical Common Datalink] is another operational capability being demonstrated on the platform because of its relevance to commanders as a method of supporting cross-domain fires,” the company says. “By employing on-board sensors and [the Tactical Common Datalink] the V-280 showed it would be able to provide targeting information to enhance the lethality of precision long-range weapons.”

The V-280 is a demonstration aircraft, a precursor to the US Army’s upcoming Future Long Range Air Assault (FLRAA) competition. That programme aims to replace the service’s fleet of Sikorsky UH-60 Black Hawk utility helicopters. Bell’s V-280 and a Sikorsky-Boeing team’s SB-1 Defiant – both participants in the Joint Multi-Role Technology Demonstration programme – are the only two rotorcraft eligible for the FLRAA competition, according to a US Army pre-solicitation notice posted 9 December.

While utility helicopters are not typically used as target spotting aircraft, the US Army wants to adopt an “all sensor to all shooter” approach to warfare in the future. That means enabling any soldier, tank or aircraft with a sensor to pass back targeting data to precision long-range weapons – or any nearby shooter – that can quickly attack and destroy an adversary.

Using the Tactical Common Datalink, Bell also demonstrated the V-280 sharing images and video from its Pilotage Distributed Aperture Sensor (PDAS) system, a series of six infrared sensors arrayed around the aircraft that provide a 360° field of view to pilots and crew in the cabin who are wearing helmet-mounted displays.

The PDAS system was used to monitor the V-280’s first sling load demonstration in February, when the tiltrotor carried 544kg (1,200lb) worth of ballast underneath its airframe. “This combination allowed pilots, crew and supervisors to monitor the sling load demonstration as if looking through the bottom of the aircraft, whether on-board or on the ground, creating a common operations perspective,” says Bell.

With the US Army’s FLRAA programme approaching, Bell is making the case that its V-280 Valor tiltrotor is well prepared. The company’s rotorcraft has been flown more than 200h since its first flight in 2017. After pushing the aircraft past 300kt (556km/h) in 2019, Bell spent much of 2020 demonstrating the V-280’s tactical abilities and soliciting feedback from US Army personnel.

In August, US Army experimental test pilots flew the V-280 for the first time and Bell demonstrated some of the rotorcraft’s automated flight abilities to them.

“It’s really for the army to gain understanding and awareness at the very visceral level, having a pilot sit in the seat and get to feel the aircraft,” says Rob Freeland, Bell’s government relations and business development director. “It’s a great opportunity for active army experimental pilots to give us feedback.”

The US Army plans to have its experimental pilots fly the SB-1 Defiant as well. 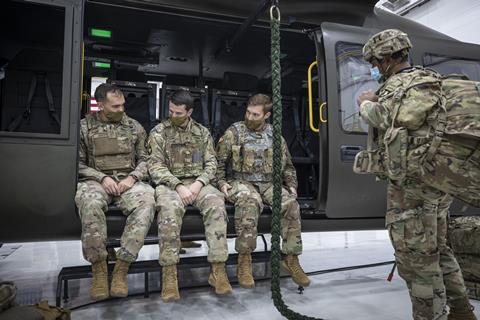 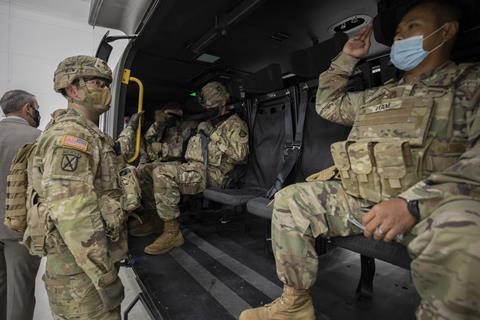 Soldiers providing feedback on Bell V-280 from inside cabin 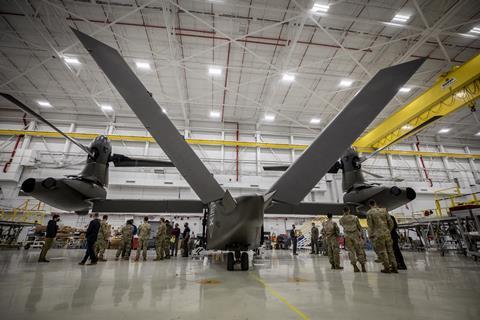 And, in October, an infantry rifle squad from the 101st Airborne Division’s Rakkasans regiment practiced ingress and egress drills in V-280 with their full kit, as part of the US Army’s “soldier touchpoints” initiative. Bell engineers solicited feedback on the cabin configuration, seat layout, restraint harnesses and headrests within the tiltrotor.

The US Army released one soldier’s comments about the V-280, Sergeant First Class Vuthy Hamm, who said: “The headrests were somewhat of a hindrance when wearing the Kevlar helmet and would most likely be worse if we had our [night optical/observation devices] attached.” Otherwise, soldiers were enthusiastic about the potential situational awareness advantages of the PDAS system, though they did not test it.

Freeland said feedback would influence the company’s final design proposal for FLRAA. He declines to share any other soldier’s comments.

Soldier feedback sessions are scheduled for the SB-1 also, says the US Army.

The service plans to conduct preliminary design reviews of the two FLRAA contenders in fiscal year 2022, with prototype building to start in the third quarter of FY2023. After the US Army selects a winner, it wants that company to have eight production aircraft ready for operations no later than FY2030.