Bell V-280 to focus on manoeuvrability after flying 250kt

Bell’s V-280 demonstration programme plans to continue to expand the tiltrotor’s flight envelope, with additional focus on manoeuvrability, after reaching 250kt this September.

So far, the aircraft has been tested on 50˚ banked turns at 200kt, which is the equivalent of 1.8g, says Vince Tobin, Bell executive vice-president for military business. During upcoming tests the manufacturer expects the aircraft to fly turns that generate more than 3g, he says.

The company has also been testing for about six months the aircraft’s ability to perform pirouette manoeuvres – flights where the tiltrotor spins around its center axis while remaining level and moving in a straight line.

“The aircraft is extremely agile in what we call helicopter mode,” says Tobin. “Even in significant wind conditions the aircraft has yaw and roll ability at low speeds that’s really unmatched.” 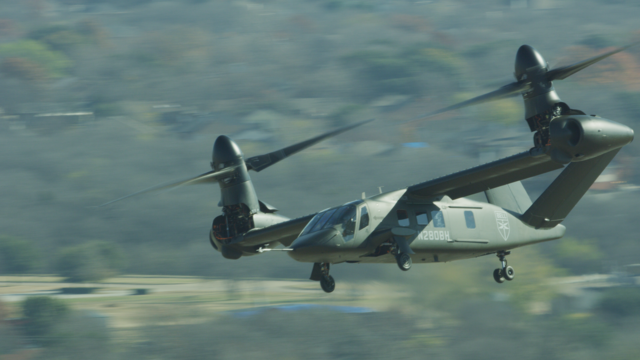 The company aims to push the rotorcraft to its 280kt top speed goal early next year.

This past fall the aircraft demonstrated a 4,500ft per minute (1,372m per minute) rate of climb.

“That’s due to the fact that you’ve got some relatively large engines from a horsepower perspective, and an airplane that’s just got lots of lift when you are using both the wings and rotor system,” says Tobin.

With about 83h of flight time on the V-280 since it first took flight in December 2017, Bell says it’s pointing out to the US Army that its tiltrotor has displayed a high level of readiness, making it a lower risk option should the service choose it for a production contract.

“We’ve been able to progress through the flight test programme and really not have anything not perform as we’ve expected it to perform,” says Tobin. “We’ve made significant progress. We’ve got a lot of hours flown. And most of that indicates the technology readiness level was pretty high and even at the manufacturing readiness level is high.”