How Russian Helicopters is expanding its product line

Russian Helicopters is in a curious position with the development of its Kamov Ka-62 medium-twin. The single-rotor helicopter – an anomaly in the Kamov range dominated by co-axial designs – was unveiled in 2012, with a plan to enter service three years later. After multiple delays and a brief hover in 2016, the helicopter completed its first flight in 2017, with the manufacturer subsequently saying that it needed to redesign part of the rotorcraft.

Perhaps the most intriguing circumstance of the programme is that the 6.5t aircraft competes with the Leonardo Helicopters AW139 that Russian Helicopters builds together with the Italian manufacturer through their HeliVert joint venture, which also involves oil giant Rosneft. Built at a site on the outskirts of Moscow, the AW139 is additionally manufactured in Italy and the USA.

Russian Helicopters director general Andrey Boginsky is quick to point out that HeliVert is a pure assembly plant, which uses imported components. Speaking to FlightGlobal in Moscow in April, he says that “unfortunately” helicopters produced at the site are granted Russian airworthiness certificates only.

AW139s assembled at Leonardo’s Italian production line are certificated under European Union Aviation Safety Agency (EASA) regulations. “The absence of this [EASA] certificate makes it impossible for us to expand the scope of sales [beyond] the Russian market,” Boginsky says. He asserts that the helicopters assembled by HeliVert are the same price as Italian-made AW139s – noting: “Our added value is only the labour cost.”

Russian Helicopters asked Leonardo to either extend EASA certification to HeliVert-assembled AW139s or to substantially reduce the equipment’s price. As Boginsky says: “From a customer’s point of view, if you purchase a [helicopter] without a European certificate, you significantly decrease your chances to liquidate this item in the future… outside Russia.

“This is why it is logical that customers come to us with the question: ‘What is the advantage of buying this helicopter?’” 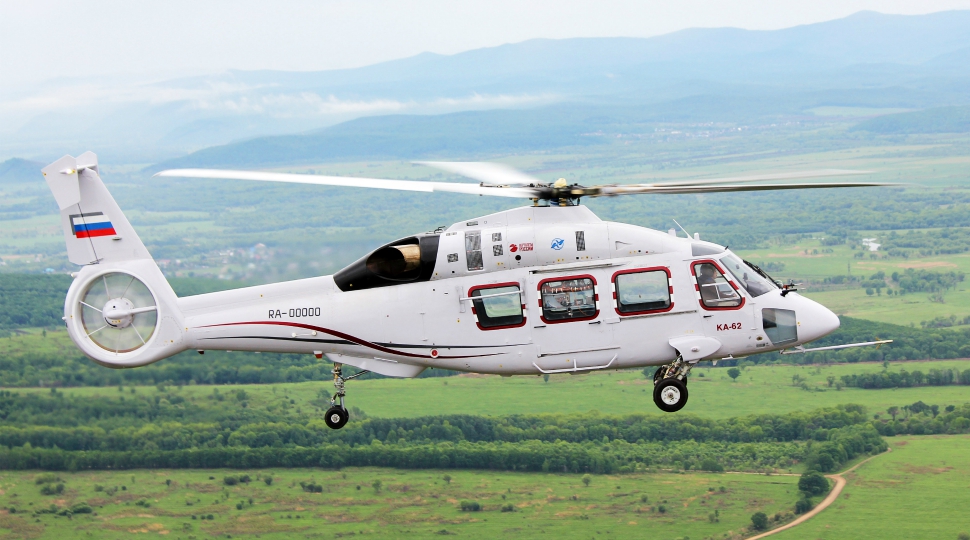 The Ka-62 – powered by Safran Helicopter Engines Ardiden 3Gs – is to be certificated under both Russian and European regulations. Boginsky foresees deliveries beginning in 2020. “We are talking to potential operators and leasing companies regarding the purchase of the first four machines,” he says.

In 2018, the manufacturer disclosed that it had “modified and reinforced” the Ka-62’s shrouded tail rotor and empennage. Boginsky says the effort included modifications to the main and tail rotor gearboxes to improve their reliability and extend the equipment’s service life. The upgraded components are in the process of being tested on the helicopter. However, he indicates that the required performance of the new equipment has yet to be confirmed: “Based on the [test] results, we will be able to understand how successful we were making those changes.”

Ultimately, the plan is to deliver two Ka-62s per month from the assembly line at the Progress Arsenyev Aviation Company, northeast of Vladivostok. But Boginsky says such output will be only feasible “if we fulfil the requirements of different customers”. The rotorcraft has been designed for medevac, search and rescue, offshore, corporate and cargo operations.

Meanwhile, the manufacturer’s VR-Technologies subsidiary is working on a light single-engined development, the VRT500. A mock-up of the co-axial rotor equipped five-seater was presented in April during Milano Design Week, as studio ItalDesign was involved in the rotorcraft’s design. The VRT500 has a maximum take-off weight (MTOW) of 1,600kg, and represents Russian Helicopters' return to the light-single segment it vacated when production of the Mil Mi-34 ended in the early 2000s.

Boginsky says a series of aerodynamic tests for individual components have been completed but notes that these did not include fuselage assessments. While a first flight was previously scheduled for 2019, Boginsky now expects this to take place from the assembly line in Ulan Ude in late 2020 or early 2021. He attributes the delay to extended supplier talks around plans to certificate the helicopter under both Russian and European regulations: “We have to do a great deal of work with the suppliers of this helicopter regarding the best price conditions and conditions for warranty and post-warranty.”

The VRT will initially be powered by a Western engine, with a Russian-made powerplant set to become an option at a later stage. Boginsky says that selection of all the suppliers for the project has been “practically completed”, but declines to name companies beyond Russia's United Engine (UEC), which is working on the domestic powerplant.

Russian Helicopters forecasts sales of around 1,000 VRT500s by 2035, which would translate to a 15% market share in the light category. 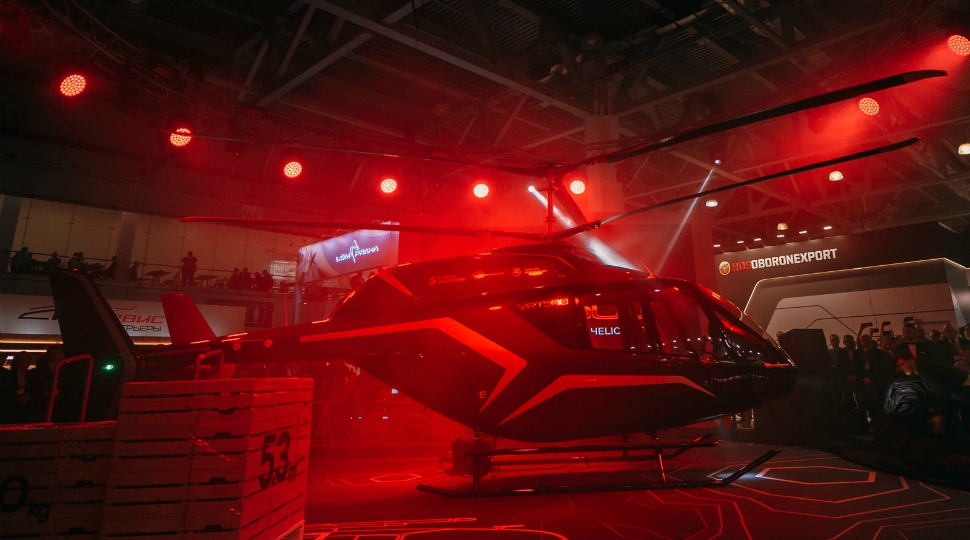 This year, the manufacturer intends to deliver the first two Mil Mi-38 helicopters. The 15.6t rotorcraft, powered by twin Klimov TV7-117V engines, has been developed as replacement for the venerable Mi-8 and Mi-17, and is now in serial production. In January, the Mi-38 underwent cold-weather trials in Yakutia to demonstrate its operability in temperatures down to -50°C (-58°F). This was followed by tests in hot-weather conditions, with temperatures up to 45°C, in the city of Astrakhan, and high-altitude operations up to 9,800ft at Elbrus, a peak in the Caucasus mountains.

Boginsky says the first two deliveries will be made to Russia’s defence ministry this year, and that the next two Mi-38s – in civilian configuration – will be handed over during the first half of 2020 to a “special flight team of the Russian Federation”, indicating deployment by a government agency.

Russian Helicopters has been subject to Western sanctions against Moscow's industrial base. Boginsky says the embargoes “mainly” affect military programmes, but this implies some degree of disruption for its civil lines too. But he argues that the import restrictions have hurt Western equipment suppliers more than the airframer.

Citing dust protection devices as an example, Boginsky says that in the past Russian Helicopters employed products from US filtration specialist Pall for a number of its rotorcraft, including the Mi-28 attack helicopter and Ka-226 light utility twin. When the restrictions came into effect, these parts were no longer available and Russian Helicopters developed alternative solutions in-house, which, he claims, “turned out to be better than what we received from Pall”.

Boginsky also asserts that the move to locally-sourced equipment has not increased costs. He acknowledges that the in-house development represented an increased risk for the production line, but claims that Western equipment suppliers charge Russian manufacturers higher prices for their equipment than Western airframers receiving the same or similar components. United Aircraft made a similar claim regarding Western-made equipment installed on the Sukhoi Superjet 100.

Although the move to locally-made products may involve an increased development effort, Boginsky insists that the final prices for alternative solutions tend to be “not higher and in some cases even lower” than original, Western supplies. He notes that Russian Helicopters’ strategy is to employ UEC powerplants wherever possible, but stresses that the manufacturer has no intention of moving away from suppliers like Pratt & Whitney Canada or Safran. 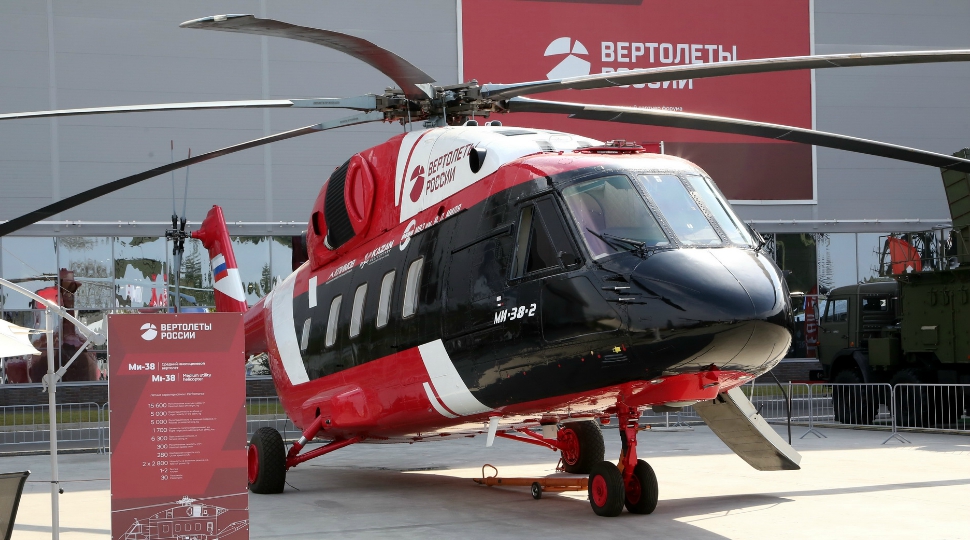 Despite the strain of sanctions and commercial limitations of the HeliVert joint venture, Russian Helicopters does not appear to have lost its appetite for potential future co-operation with Western manufacturers. Boginsky says: “We are always open for partnership and co-operation, both in using foreign components and [building helicopters], provided that our partners do not restrict us in the sale of those helicopters. And we are always open to take part in programmes for assembly of our helicopters… outside Russia.”

At the Aero India show in February, Russian Helicopters disclosed preliminary agreements with five Indian manufacturers to produce components under a planned deal to supply 200 Ka-226T utility helicopters to the country’s army and air force.

Under the proposal, some 60 helicopters will be produced in Russia, with the balance due to be assembled in India via a joint venture with Hindustan Aeronautics. The five preliminary supplier agreements cover provision of rotor blades, fuselages, gearboxes and landing gear. Boginsky says that the programme foresees up to 80-90% localised production, but does not specify a schedule for the project. “We expect our Indian colleagues will soon invite the Russian side for commercial negotiations,” he says. In addition, Russian Helicopters plans to pitch the Ka-226T for India’s looming 111-unit Naval Utility Helicopter requirement.

Earlier this year, Russian Helicopters reached an agreement to assemble a total of 45 Mi-8/-17s in Kazakhstan until 2025. Meanwhile, the manufacturer is in the “final stages” of talks with Chinese aerospace group AVIC regarding the latter’s planned Advanced Heavy Lifter (AHL) helicopter. Boginsky says that Russian Helicopters intends to participate in the project by designing certain components for the AHL. “This will not be a new model of our product range. This will be contractual design work from our side based on the requirements from the Chinese side,” he says. Nevertheless, he sees the AHL project as a stepping stone to potentially closer co-operation with Chinese manufacturers: “We do not yet know if this will become a request from our Chinese colleagues for a new helicopter. But if they come to us with such a request, we will be ready to consider it.”

But Russian Helicopters is not just focused on the rotorcraft world. Its Ulan Ude Aviation Plant has been selected to manufacture an updated, turboprop-powered version of the Antonov An-2. The world’s largest single-engine biplane was manufactured by the Ukrainian manufacturer until 1971, though production continued in Poland until 2002.

Rebranded TVS-2DTS, the updated aircraft completed a first flight in 2017, powered by a Honeywell TPE331-12 turboprop engine and – perhaps surprising for a low-cost utility aircraft – features a composite fuselage. Boginsky says that the manufacturer has not yet decided whether the airframe will be built from glassfibre or carbonfibre, and that the design will be finalised by 2022.

That implies a delay to the programme as last year Russian Helicopters said that serial production was scheduled to begin in 2019. Under an agreement with Russia’s government, the rejuvenated aircraft is to be employed to improve transport links to remote areas and to provide services like emergency, firefighting and agricultural flights. Some 200 TVS-2DTS planes will be delivered to Yakutia-based Polar Airlines, which has been tasked to develop regional aviation, Russian Helicopters says. 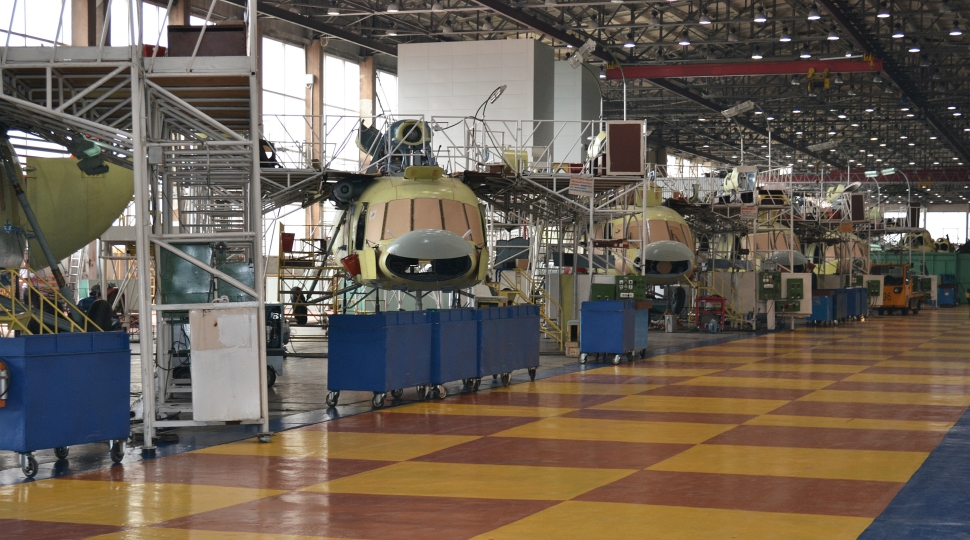 For Boginsky, the project is a step to position the manufacturer for potential future fixed-wing aircraft projects. Noting that during the Soviet era some of Russian Helicopters’ facilities were involved in fixed-wing aircraft production, he describes the TVS-2DT as being “definitely a testing ground for us”. He suggests that building commuter aircraft or regional turboprops could be an avenue for Russian Helicopters as “no company in Russia, on an industrial scale, is involved in the design and production of the aircraft with less than 50 seats”. The only minor exception to that is Ural Works of Civil Aviation in Ekaterinburg, which licence-builds Let L-410 twin-turboprops.

Of course, the move into fixed-wing aviation would not be without difficultly, not least the internal stresses of competing with fellow Rostec company United Aircraft (UAC). Boginsky says that Russian Helicopters’ interest in fixed-wing aircraft production is “a very delicate topic for us right now… a firm decision to get involved with fixed-wing aircraft will require quite a lot of investment, qualification and experience”.

Increasing internal competition within its aerospace division is perhaps not what Rostec management had in mind when the group acquired a stake in UAC. Boginsky notes, however, that his job is to make the most of Russian Helicopters’ capabilities and to find new areas of potential activity for the manufacturer.