Revealed on 1 November, the proposals laid out by General Micael Byden, head of the Swedish military, will see the country retire the NH90s operated by its armed forces for battlefield support and naval missions, replacing them respectively with additional Sikorsky UH-60 Black Hawks and a yet to be determined type. 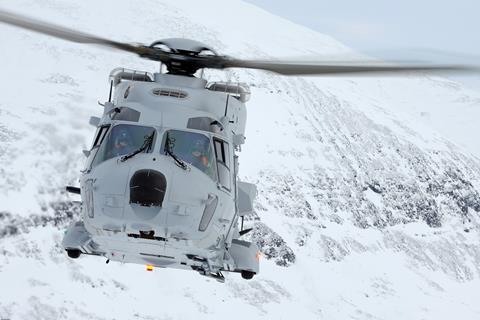 Retirement of NH90s will be completed by 2035 under proposals

Stockholm earlier in the year had commissioned a review into the performance of its NH90 fleet, particularly relating to upgrades required to bolster the type’s anti-submarine warfare capabilities. Availability issues with the troop transport variant have also been a concern.

On the back of that process, Byden’s plans call for it to “decommission” the HKP-14Es and -14Fs – Sweden’s designations for the NH90 troop transport and maritime helicopters – over the period from 2024 to 2030. The 18-strong fleet comprises nine of each version.

Under the proposals, Stockholm will begin the procurement of a new maritime helicopter in the 2024-2030 period, while also buying additional Black Hawks for the battlefield support role.

“The aim is to meet operational requirements earlier and increase availability of the helicopter fleet to be able to support the army, special forces and navy needs,” the plans indicate.

Retirement of the NH90 fleet will be completed by 2035 at the latest, in parallel with the acquisition of new Black Hawks, the document says. 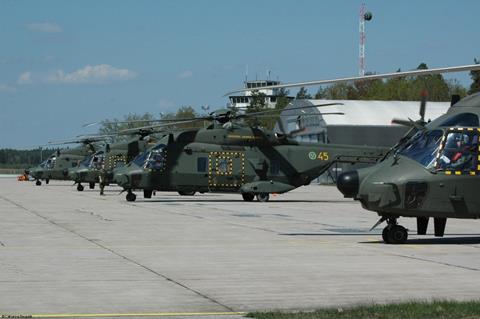 In addition, Sweden will begin the retirement of its 20-strong fleet of Leonardo Helicopters AW109M light-twins in the 2024-2030 period, with that process to conclude by 2035.

By 2035, its helicopter fleet will comprise nine for naval operations and 27 for battlefield support. At present, it operates 15 UH-60s that were acquired due to delays with the NH90 programme.

Stockholm’s decision – which has yet to be formally approved by the government – is the latest blow for the NH90 in the region. Earlier this year Norway said it was cancelling its contract with NH Industries and returning the helicopters it had already received due to delivery delays and a capability shortfall.

Australia has also moved to replace its NH90 fleet with Black Hawks due to availability issues.

NH Industries (NHI) – a three-way consortium comprising Airbus Helicopters, Leonardo Helicopters and GKN/Fokker – says it ”acknowledges” the Swedish study and the rationalisation of its helicopter inventory ”including the phasing out of their current NH90 fleet”.

It points to the customisation of the helicopters for Sweden’s requirements – including increased cabin height and a Saab-developed tactical mission system for the naval version. In addition, NHI stresses that availability rates for the country’s NH90s have been “above the average for similar helicopter types” albeit the size of the available fleet has been “temporarily reduced” in recent years due to a retrofit and upgrade programme running since 2017 but due to conclude by end-2023.

”The expected return into service of all of the Swedish NH90s at that time will boost fleet availability. NHI has also proposed to the Swedish armed forces over the last few months additional measures that could significantly improve availability and reduce operating costs with limited efforts,” says the consortium.

This story has been updated with comments from NH Industries.