There is a long-term favourable trend in business-jet fatal accident rates - and a significant improvement during the past three years which will be remarkable if sustained.

That is the judgement of Paul Hayes, senior safety analyst at Flightglobal's data and consultancy division Ascend.

During the 1990s, the rate in question was one fatal accident per 600 aircraft, while for the 2000s it has been one per 900 aircraft. On this basis, 2011 was the safest year ever for the class and continues the safety improvement trend that has halved the accident rate in the past 10 years.

The fatal accident rate is expressed as risk per airframe/year - rather than per million flights - because of unreliable aircraft movement data in this sector, but Ascend says the high standard of fleet data means variations in risk exposure can still be reliably tracked.

Business turboprops fared relatively poorly with a fatal accident rate of one per 830 aircraft last year, compared with one per 1,400 aircraft in 2010.

But while 2011 was a relatively poor year for business turboprops, this is only in comparison with business jets and the good outcome the class had in 2010. What's more, the overall trend still shows an improving accident rate for business turboprops. For example, the fatal accident rate for turboprops in the 1990s was one per 435 aircraft, while in the 2000s it has been one per 560. However, safety for this fleet is not improving at the same rate as for business jets, so the relative safety performance of the jet and turboprop fleets is diverging. 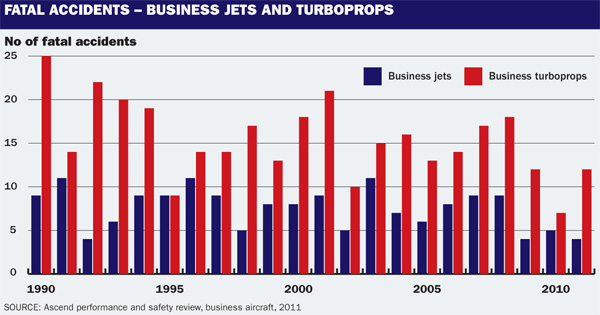 In terms of fatalities in 2011, the worst business aircraft fatal accidents included two turboprop and one jet crash.

In February, seven passengers and two crew were killed when a Majuba Aviation Pilatus PC-12 crashed into the sea during a go-around in poor visibility near Plettenberg Bay in South Africa.

In the same month, four passengers and three crew were killed when a Sky Lounge Hawker 850XP crashed immediately after take-off from Sulaimaniyah, Iraq.

The Air Charter Services Pilatus PC-12, which crashed at Faridabad, India in May while descending inbound to Delhi, resulted in the death of five passengers and two crew.

In simple accident numbers rather than rates, business jets suffered a total of four fatal accidents last year, in which 16 people died. By comparison, in 2010, 18 passengers and crew died in five fatal accidents. But as Hayes points out, figures for the past three years show a considerable improvement on earlier years, when some seven or eight fatal accidents might have been expected in any given year. Another indicator of progress is that the fatal accident total in 2011 was about half the annual average for the past decade (7.6) and also of the 1990s (8.1). 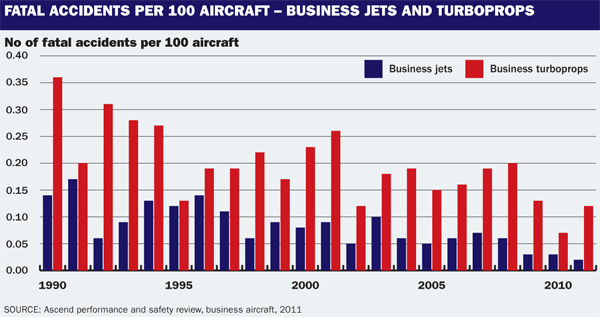 Onboard casualty figures also show improved accident survivability. In 2011 there were an average of four fatalities per fatal accident. The 2011 result was an improvement on the average of 23.4 fatalities for the 2001-2010 decade and half that for the 1990s (35.4).

Business turboprops were involved in 12 fatal accidents in 2011, five more than in 2010 but the same as 2009. As with business jets, the past three years have shown an improvement on earlier years when 15 fatal accidents a year might have been considered typical. The number of fatal accidents in 2011, although worse than the year before, was still down on the annual average for the last decade (15.4) and also the 1990s average (16.7). 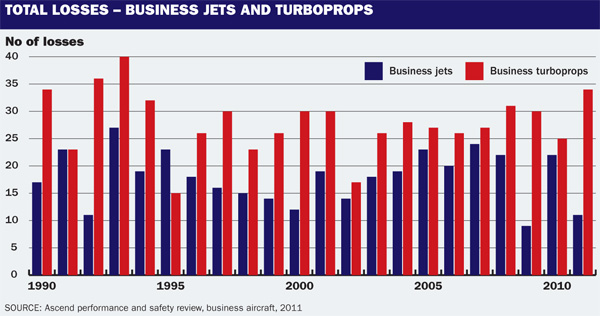 Turboprop casualty figures show there were 48 passenger and crew deaths in the 12 fatal accidents in 2011, an average of four fatalities per fatal accident. The annual average for the 2000s was 49.5 and for the 1990s it was 57.6.

Onboard jet/turboprop fatality rates in 2011, calculated as deaths on board per 1,000 seat-years, has generally followed the established pattern for fatal accident rates, with business jets producing a relatively good result and turboprops being relatively poor.

Business jets showed a small improvement from 2010, going from about one death per 11,100 seats, to one per 12,500 seats last year. However, in 2009 the fatality rate was even lower at one per 16,600 seats - the lowest ever. The past three years have all produced results that were much better than average. The average fatality rate for the 2000s showed significant improvement compared with the 1990s, with the respective figures of one fatality per 6,700 seats against one per 2,600 seats.

Turboprops last year showed a fatality rate of one death per 2,300 seats, compared with one per 4,500 in 2010. The fatality rate in 2009 was one per 2,000 seats, the same figure as the average for the past decade. The long-term trend is favourable, but again the rate of improvement does not match that for the jet fleet.

The turboprop average for the 1990s was one fatality per 1,500 seats. Hayes points out that although the turboprop business aircraft fatality rate during the past 10 years has shown an improvement compared with the 1990s, there has been virtually no improvement in the rate in recent years.

However, based on past experience it is likely that a number of 2011's substantial damage accidents currently assessed as "major partial losses" may turn out to be constructive total losses, but Hayes points out that insurers believe it unlikely that the result for the year will worsen significantly.

Meanwhile, the longer-term trend shows no improvement in hull loss accident frequency. Expectations, based on present performance projections, would be something between 15 or 20 total losses a year.

Business turboprops suffered 34 total losses in 2011. However, this figure included a significant number of non-operational losses which came as a result of the tsunami at Sendai, Japan last March, and also the Bangkok floods last October.

As with the jets, there has been no significant reduction in the frequency of turboprop total losses during the past 20 years.

The general message is that although risks to life and limb are declining in the business aviation sector, non-fatal hull-loss accidents are not reducing.

DATA-DRIVEN HOPES FOR A SAFER SECTOR

The US Federal Aviation Administration is working to bring data-driven safety improvement plans to the general aviation sector in the USA, including the business aviation part of GA.

The intention is to reproduce in GA the significant improvements achieved in airline safety during the past 15 years through the Civil Aviation Safety Team (CAST), which analysed accident and incident data to identify the areas of highest risk, and which also developed programmes to address the problems.

Data will be gathered via the voluntary aviation safety information analysis and sharing (ASIAS) programme, which the FAA hopes business aviation operators will sign up to. Using these figures, the General Aviation Joint Steering Committee (GA JSC) will develop priorities for action.

Tony Fazio, of the FAA's office of accident investigation and prevention, presented on the state of the GA JSC overview at the Flight Safety Foundation/National Business Aircraft Association Corporate Aviation Safety Seminar in San Antonio in mid-April. At the top of the priorities list for action is loss of control; while second is controlled flight into terrain on the basis these are the most frequently occurring fatal accident categories.

Fazio set out a series of objectives for improving general aviation safety in all its sectors, including: