The Italian Air Force is aligned to complete the first transatlantic crossing of the Lockheed Martin F-35 when its first two aircraft fly from Novara, Italy, to Arizona in early 2016, and those aircraft are likely be refuelled along the way by Italian Boeing KC-767A tankers.

The US Marine Corps’ planned hop across the pond to London for the Farnborough Airshow last year was thwarted by an F-35A engine fire that temporarily grounded the entire fleet.

Now, with the delivery and successful first flight of the first Italian F-35A from the Cameri Final Assembly and Check Out facility, the Italian Air Force is expected to make the historic journey before any DOD aircraft, and its KC-767 is on track to be fully certified to support the crossing.

The KC-767 completed its first refuelling of an F-35 in late July during a qualification flight at Edwards AFB in California. It is the first international tanker to do so.

“For the [Italian Ministry of Defence], their intent is to deploy those aircraft to the United States in the first quarter of 2016, probably trailing behind an Italian 767,” Lockheed’s director of Italian F-35 business development, Robert Dooley, said during a conference call 8 September. 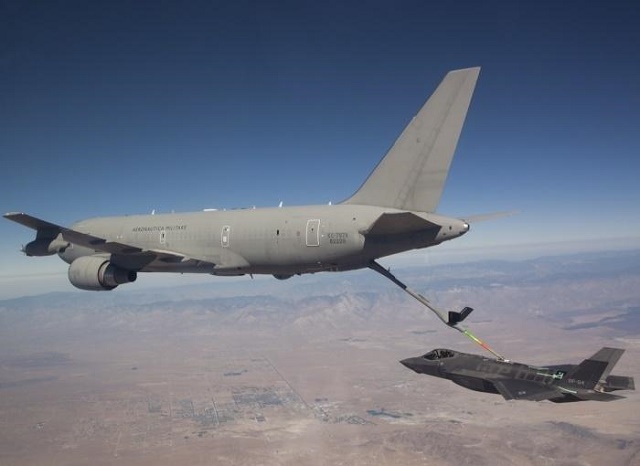 The first five Italian jets off the Cameri assembly line are destine for Luke AFB in Arizona where they’ll be incorporated into the international F-35A pilot training school. Aircraft number six, however, will remain in Italy – becoming the first operational F-35 to be based outside of the USA.

Dooley says AL-6 will be delivered in late 2016, and it’s delivery to the Italian government will cap an impressive run of firsts for the Italian F-35 programme.

The first aircraft off the Cameri line, AL-1, completed its maiden flight 7 September, and will fly again 9 September before being formally handed over from Lockheed to the US government for verification testing and final delivery to the IAF.

At the controls was Lockheed F-35 test pilot Bill Gigliotti, who took questions from the media during the conference call. Gigliotti has flown dozens, if not hundreds, of F-35 checkout flights from Fort Worth in Texas, and he says the Italian-assembled F-35 was as good as any aircraft coming off the American assembly line. 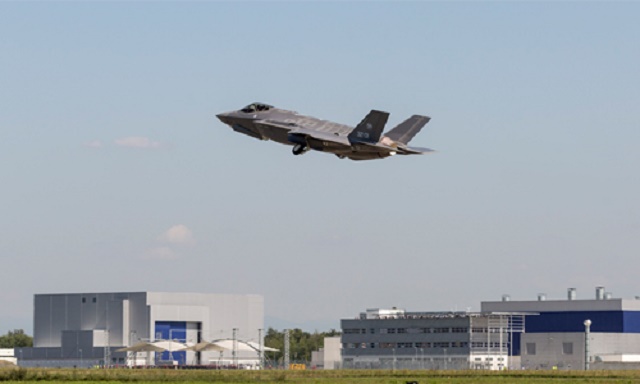 AL-1 takes off from Cameri Air Base 7 September on its first checkout flight.

“A resoundingly successful achievement, and it is only the precursor to the future flights that are going to be taking off out of this location for years to come,” he says. “This jet surprised me very little. Because of the quality of the people and the facilities here, I knew I was in a quality product and the jet responded the same.”

The second aircraft, AL-2, is almost complete and will likely take to the sky in October.

For Italy, AL-1’s delivery is a significant industrial achievement and comes five years after the Italian government signed an agreement to assemble its jets domestically.

The country’s first F-35B, which is being ordered as part of the ninth low-rate initial production lot, is expected to begin assembly in 2017.

Cameri will also assemble aircraft for the Netherlands, which is programmed to buy 37 F-35As, although there is scope for future growth.

“I see this production facility being busy for years to come,” says Dooley. “The workforce here is first-rate, and not to leverage that would be a mistake.”

The assembly line is owned by the Italian government and run by Alenia Aermacchi, a subsidiary of Finmeccanica, with about 800 domestic workers and a team of 30 to 40 personnel from Lockheed.

Located at Cameri Air Base, the facility co-supplies F-35A full wing assemblies and has been selected as the European F-35 airframe maintenance, repair, overhaul and upgrade centre.

(Clarification: An earlier version of this story misstated which nation’s aircraft will be assembled at the Cameri final assembly and checkout facility. Only Italian and Dutch aircraft are currently planned for assembly assembled there.)