The US Marine Corps tested its own expeditionary UAV in July, when General Atomics equipped an MQ-9 Reaper with a network-centric communications pod (NCCP) to enable communications between the UAS and Marine ground forces.

The USMC was able to conduct its mission beyond line-of-sight during a demonstration at Marine Corps Air Ground Combat Center in Twentynine Palms, California.

Today, the US Marine Corps relies on the the US Air Force’s fleet of MQ-9 Reapers and MQ-1 Predators for expeditionary missions. But the service laid out a future requirement in its 2016 aviation plan, outlining the need for a large, armed platform capable of operating from ships. The Marine Air Ground Task Force – Unmanned Expeditionary Capabilities (or MUX concept) envisions not only a strike platform to complement the Bell Boeing MV-22 Osprey tiltrotor and Lockheed Martin F-35B, but a multi-sensor, electronic warfare and C4 UAV.

“The Marine Corps’ big gap that we discovered through this effort, they really have a gap to communicate, interoperability,” Doug Hardison, General Atomics Aeronautical Systems’ strategic development manager for US Navy and Marine Corps programmes, tells FlightGlobal. “As far as strike systems, their vision for group five UAS is kind of a multi-role, multi-mission airframe that does everything from general operability, which is expanding the network for folks on the ground and in the air.”

While the ANW2 focuses primarily on a ground network, the TTNT is more conducive for aerial networks, Hardison says. General Atomics' vision is to exchange information from the ground and TTNT network, so forces on the ground operating the KILSWITCH can note their position, the enemy’s position and the share the information across all the air platforms, Hardison says. 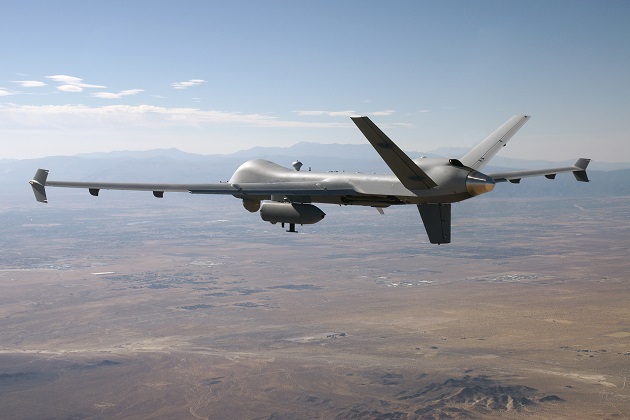 Flying at 20,000ft, the Reaper was also able to locate the site of the fatal 28 July F/A-18 crash from 45-kilometers away within seconds using the Raytheon MTS-B electro-optical/infrared sensor, Hardison says.

“It’s a very powerful sensor that Marine Corps doesn’t have anything like, and at 20,000ft we were able to basically sway the ball to that particular grid coordinate and... located the wreckage.”

General Atomics is targeting neither the MUX nor an interim expeditionary capability for the USMC right away, but has secured another customer for an expeditionary capability, Hardison says. In order to allow the Reaper to land on shorter runways, rather than the current US Air Force configuration of about 5,000ft, General Atomics is examining paring down the minimum runway length to 3,000ft. That would allow the Reaper to operate in the same space as a C-130.

“We’re also greatly shrinking the command and control capabilities that are required,” Hardison says. “Right now you build a [ground control station] and all the different terminals, but we want to shrink that down into a much smaller form factor.”