The US Marine Corps must “extract every ounce of life” from its inventory of ageing combat types as it transitions to the multi-mission Lockheed Martin F-35 Joint Strike Fighter (JSF) over the next 16 years, says the general in charge of the service's aviation branch.

The USMC is wholly dependent on buying 353 short take-off and vertical landing F-35Bs and 67 carrier-based F-35Cs to replace its larger force of Boeing AV-8B Harriers and F/A-18 Hornets, and Northrop Grumman EA-6B Prowlers. It recently declared initial operational capability with the first F-35B combat squadron based in Yuma, Arizona.

On 12 August the service revealed the timeframe to transition to the JSF, saying the switch from the Harrier to the F-35B will take 11 years with the last aircraft retiring in 2026, “subject to review, assessment and a final decision in 2019”.

Replacing the F/A-18 Hornet will take 15 years, concluding in 2030. In the interim, the US Navy and USMC are extending the service life of their legacy Hornets from 6,000h to over 9,000h. The Hornets are being overhauled at the navy’s Fleet Readiness Centre-Southwest in San Diego, California, at a rate of 40 to 50 aircraft per year.

“You have to take care of the Harrier and Classic F-18 for this major transition,” US Marine Corps deputy commandant for aviation Lt Gen Jon Davis said at the US Centre for Strategic and International Studies on 12 August. “It’s a strategic imperative to the Marine Corps to take good care of these airplanes.” 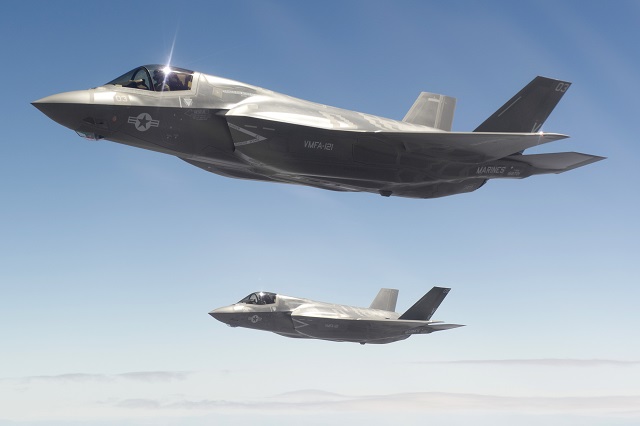 The F-35’s electronic warfare suite will allow the marines to get by without the EA-6B, which entered service in the 1970s and is the service’s primary asset for jamming and attacking enemy air defence radar sites and communications hubs. The four remaining Prowler squadrons at Cherry Point in North Carolina will be retired at a rate of one per year beginning in 2016.

“The F-35 for us is that fifth-generation platform that is going to change the battlefield, much like the [Bell Boeing] V-22, giving us access to the contested battle space,” says Davis. “For our adversaries it will be quite worrisome, but for us it will be a source of great comfort.”

To date, the Marine Corps has trained and qualified upwards of 50 F-35B pilots and about 500 maintenance personnel. The first combat squadron, VMFA-121, was declared operational on 31 July, with the next unit, VMA-211 – which currently flies Harriers – to receive its first F-35 in 2016.

The first Hornet squadron to transition will be VMFA-122 based at MCAS Beaufort in South Carolina. That squadron is being stood up about one year earlier than planned due to the purchase of six additional F-35Bs to replace F/A-18s destroyed in combat.

Davis says the Marine Corps is moving away from single-purpose aircraft to multi-mission platforms, and the F-35’s upgrade to Block 3F in 2017 will allow it to carry about 1,360kg (3,000lb) more ordnance than the F/A-18. Block 3F will allow the F-35 to carry external weapons. 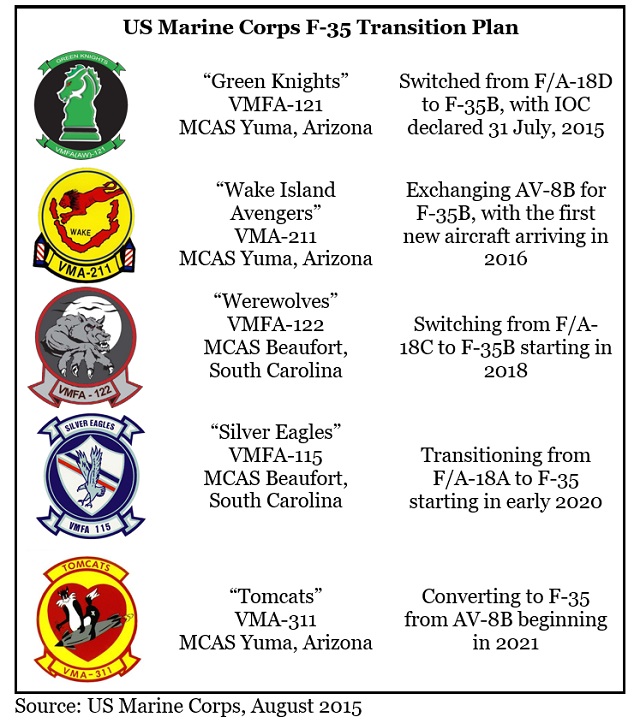