NASA has kicked off a flight test campaign to evaluate wing surfaces that can change shape in-flight. The Adaptive Compliant Trailing Edge (ACTE) joint effort between NASA and the US Air Force Research Laboratory (AFRL) hopes to bring a step closer the day when rigid control surfaces can be replaced by smoothly morphing surfaces, which would more closely mimic bird flight and promise to make future airliners quieter and more fuel efficient.

The flaps, designed and built by FlexSys of Ann Arbor, Michigan, were locked at a specified setting during the initial ACTE flight, but different flap settings will be employed on subsequent flights to collect a variety of data demonstrating the capability of the flexible wings to withstand a real flight environment.

According to AFRL programme manager Pete Flick, of Wright-Patterson AFB in Ohio, the flaps have the potential to be retrofitted to existing aircraft wings or integrated into new airframes.

“We have progressed from an innovative idea and matured the concept through multiple designs and windtunnel tests to a final demonstration that should prove to the aerospace industry that this technology is ready to dramatically improve aircraft efficiency,” he says.

According to Thomas Rigney, ACTE project manager at Armstrong, the first flight “went as planned – we validated many key elements of the experimental trailing edges”.

“We expect this technology to make future aircraft lighter, more efficient and quieter. It also has the potential to save hundreds of millions of dollars annually in fuel costs,” he says. 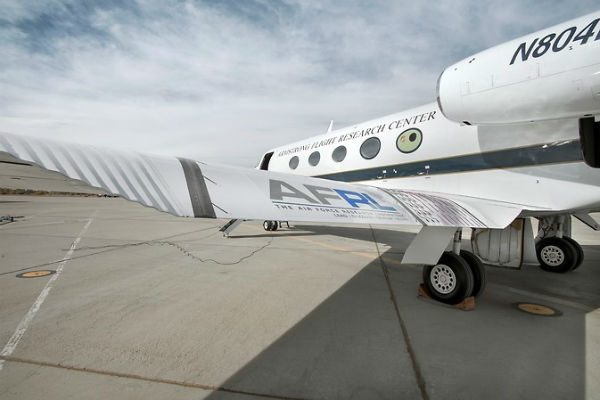