The US Navy’s acquisition chief expects the Sikorsky CH-53K King Stallion to take its first flight this fall, placing the long-awaited milestone somewhere between now and November.

The super-heavy-lift helicopter for the Marine Corps has seen its share of technical troubles and delays, but the navy is still targeting an initial operational capability date of 2019.

The aircraft, which began development in 2006, was meant to be approved for “Milestone C” low-rate initial production and deployment in 2012, but the target was revised to 2016 due to budgeting and development issues with further postponements likely unless the first CH-53K can get off the ground this year.

The first flight had been expected in 2014, but technical problems with the gearbox and drive shaft have delayed the event from late 2014 to mid-2015 and then “sometime this year”.

The first aircraft was unveiled in May 2014, and the ground testing that followed unearthed several critical issues that must be resolved prior to first flight. 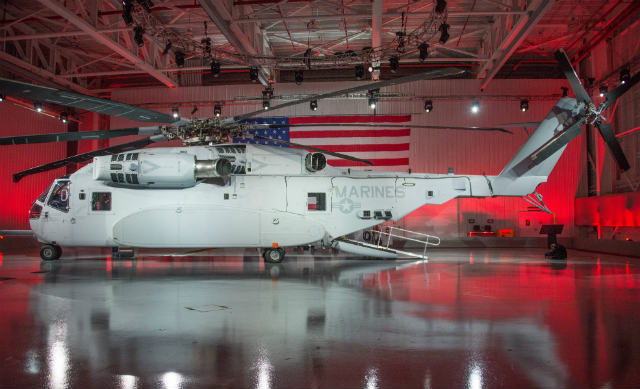 Lt Gen Jon Davis, Marine Corps deputy commandant for aviation, told Flightglobal at a Centre for Strategic and International Studies (CSIS) forum in Washington last month the aircraft should fly by the end of the calendar year and the 2019 IOC date is still achievable.

“When I got here a year ago it was 2019 and it’s still 2019,” he says. “First flight is this year. Congress gave us [funding for] two airplanes for test assets and right now the programme’s on track.”

Asked whether the gearbox issue or any other problems will further delay the programme, Davis said no. “It’s normal stuff; normal developmental stuff. I’d be the first to pull the plug, but I don’t see anything to say we’re not going to make first flight this year,” he says.

The King Stallion is one of several helicopter programmes caught up in the Lockheed Martin’s acquisition of Sikorsky from United Technologies – a $9 billion transaction the Defense Department says it is closely monitoring.

Speaking at the same CSIS event, naval air forces commander Vice Admiral Mike Shoemaker said the transfer of Sikorsky did not worry him, so long as Lockheed continues to produce and sustain the aircraft it is supposed to. For him, that includes CH-53K and the VH-92 Presidential Helicopter. For sustainment, the main programmes are CH-53E and the H-60 variants, as well as upkeep of the VH-3D Sea King of Marine Helicopter Squadron One.