Airlines have added a slew of new routes to secondary points across the Atlantic, recalling the days before the 2008 credit crunch when such routes were last in vogue.

Cities like Cologne, Hartford, Newcastle, and San Jose in California have new, and in some cases first-ever, nonstops across the Atlantic this September, FlightGlobal schedules data shows.

But the status of some of these new routes may be tenuous at best. Hartford, for example, gained a nonstop to Amsterdam on Northwest Airlines in 2007, only to lose it less than a year later. Similarly, Cologne lost its only transatlantic nonstop to Newark on Continental Airlines in 2008 after just three years of service. Prior to that, the German city's last flight across the pond was in 1990.

Many of these routes were scuppered by the combination of high fuel costs and the recession that followed the credit crunch.

Today, fuel prices are comparatively low and economies on both sides of the Atlantic continue to perform steadily, if not spectacularly. Transatlantic capacity is up in turn, with seats scheduled to increase 11.2% to 4.67 million this September compared with a year ago, FlightGlobal schedules data shows.

Compared with September 2007, the year before the credit crunch, the increase is more dramatic. Seat capacity is up 26% this September from nine years ago, data shows.

"The transatlantic market remains the greatest challenge for legacy carriers as capacity to Europe is showing no signs of abating," wrote Savanthi Syth, an analyst at Raymond James, in a June report.

As a result, all three carriers have cut seasonal Atlantic capacity growth plans this winter from their expectations at the beginning of the year.

The first routes to go include many of the new services that have launched in recent months. Most carriers call them seasonal reductions, declining to confirm whether or not they will return a year from now.

The UK electorate's June vote to leave the European Union created a fresh wave of uncertainty regarding the future of transatlantic air service. Some Wall Street analysts claim that this means the UK will exit the EU-US open-skies agreement, potentially limiting the expansion of non-UK-based low-cost carriers like Norwegian from cities in Britain, while some airlines have said they expect no changes.

"The immediate consequences of the vote include the weaker British pound, which makes foreign travel from the UK more expensive," wrote Fitch Ratings analyst Joseph Rohlena in a July report. "Longer-term effects of a weaker UK economy are harder to predict given the uncertainty around the timing of the UK vote to exit the EU. Nevertheless, the Brexit referendum likely represents an incremental headwind for the foreseeable future."

Delta and United both announced plans to cut their planned capacity to the UK following the Brexit vote, citing the political uncertainty and sharp drop in sterling value.

Leisure routes to second-tier cities are the most at risk. Executives at Delta and United said they were feeling the greatest pressure in cities with high sterling points-of-sale, both citing Manchester as an example. Delta said it would cut capacity to the UK by 2% to 4% this winter.

London, by contrast, has a high percentage of business travellers and sales in the USA, protecting the market from some of the currency pressure that airlines are seeing elsewhere in the UK.

Glen Hauenstein, president of Delta, said in July that it would likely achieve the seasonal capacity reductions by reducing frequency and aircraft gauge on certain routes to the UK. However, he did not rule out discontinuing some routes, noting that the airline was still evaluating its plans.

Delta equity joint venture partner Virgin Atlantic will adjust capacity across the Atlantic in line with its US partner, said Delta chief executive Ed Bastian at the time.

United will reduce capacity across the Atlantic 1-2% in the fourth quarter, said its chief revenue officer Jim Compton in July. He cited Brexit uncertainty, but also terrorism fears on the European continent and industry capacity growth.

While he says the Star Alliance carrier is still analysing the situation in the UK following Brexit, he did note that it already planned some seasonal reductions, including suspending Manchester-Washington Dulles service, reducing frequency on Manchester-Newark and reducing gauge on London Heathrow-Dulles.

American, however, is not making transatlantic reductions. "There are a lot more consultants, lawyers [and] bankers that are likely to be flying back and forth, figuring out what the heck this means and what are we going to do," said Scott Kirby, president of American, during a July briefing.

"So far our booked revenues have improved in the month since Brexit happened, at least relative to where they were before," he adds.

IAG, the parent of American's partner British Airways, reduced its profit outlook in June citing a variety of factors including uncertainty following the Brexit vote. However, it has yet to make any changes to transatlantic capacity following the referendum.

"There are some areas where more capacity has gone in, particularly to [mainland] Europe. [For] the UK, I think the general demand environment remains good. We have seen a lot of capacity and growth come in from the likes of Norwegian, WestJet and Rouge, principally into Gatwick. [But] very little in terms of additional capacity into Heathrow.

"We have opportunities and we believe this is a market where there are opportunities for IAG," he says, though that includes new transatlantic destinations for the group's new Irish unit Aer Lingus.

There are more low-cost carriers flying across the Atlantic today than in any summer in recent history. While most new service has been from major gateways like London and Paris, secondary cities like Copenhagen, Cork and Oslo are benefiting.

Capacity at Norwegian, the largest LCC across the Atlantic, is up 58% to 87,000 seats this September compared to a year ago, FlightGlobal schedules data shows. New transatlantic points include Boston, Las Vegas and Paris Charles de Gaulle; additionally, there are new routes from existing gateways. 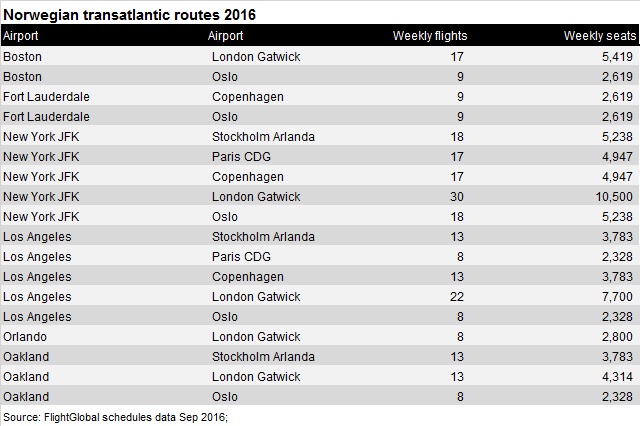 The Oslo-based carrier has committed to launching Cork-Boston flights in 2017, and its chief executive Bjorn Kjos has said that the Boeing 737 Max, which Norwegian is set to take from 2017, will open up even more secondary markets in the northeastern USA to services from Europe.

WestJet launched its first service to London Gatwick in May, after testing transatlantic services to Dublin and Glasgow on a 737 during past summers. With the new routes, capacity will be up more than threefold to 35,000 seats this September versus 2015.

"We are extremely pleased with the customer response to our London Gatwick services," said Gregg Saretsky, chief executive of Calgary-based WestJet, in July. "Load factors are well ahead of system averages."

Sixth-freedom traffic, from passengers travelling from one country through a second country to a third country – like from the UK to the USA via Canada – is "exceeding expectations by a wide margin” for the airline, he adds.

While competing directly with Air Canada and BA on its six routes to Gatwick, sixth-freedom traffic would also put WestJet in competition with the US mainline carriers as well as Virgin Atlantic.

Atlantic PRASM at Air Canada declined 9.9%, the highest of any region in its system, on a 16.6% capacity increase in the second quarter, the carrier's financial results show.

"The revenue environment on the Atlantic was difficult with yield being impacted by increased industry capacity from Canada and the United States and competitive pricing activities on certain European services," said Ben Smith, president of passenger airlines at the Montreal-based carrier, in late July.

While neither he, nor any Air Canada executive, cites WestJet by name, FlightGlobal schedules data shows that in September the low-cost carrier was the largest source of growth between Canada and Europe after Air Canada itself.

Low-cost competition is here to stay across the Atlantic. Norwegian and WestJet both plan to expand, Ryanair chief Michael O'Leary has long talked of the potential for a transatlantic proposition, and JetBlue Airways has just announced that it has conversion rights to the long-range Airbus A321neo from 2019, something that would allow it to begin transatlantic flying from its Boston and New York bases.

The combination of expanding LCCs, economic uncertainty and possible Brexit fallout paints a complicated picture for transatlantic flying going forward. While immunised joint ventures continue to control more than 80% of the market, carriers like American and United cannot continue to see yield declines while growing their already large share of the market.

The question is who will blink first.