One of history’s greatest military aviators, Capt Eric “Winkle” Brown, who has died at the age of 97, was a hugely talented pilot who unquestionably also owed at least part of his longevity to a persistent run of good fortune. 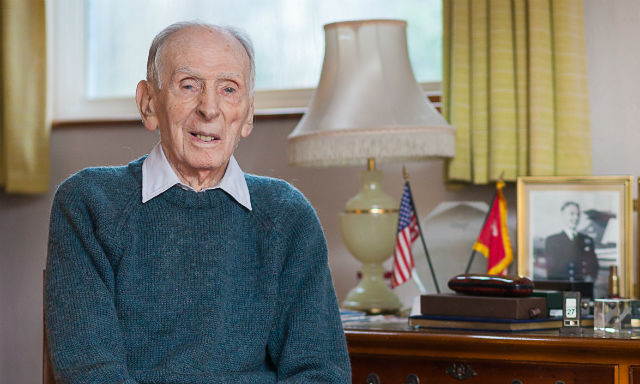 Eric "Winkle" Brown, photographed at his home in late January by Susanne Hakuba

Born in Edinburgh, Scotland in 1919, Brown – the son of a Royal Flying Corps pilot – said he “was a product of the RFC”, with flying “in my blood”.

His first taste of the activity that would dominate his life came as a young boy, when he was flown in a Bücker Jungmann biplane by First World War ace Ernst Udet.

Brown’s interest was furthered while studying modern languages – particularly German – by gaining experience with the University Air Unit in his home city. Unaware of his growing skill in the air, in 1939 he was sent back to the UK from Berlin, where he had been studying, when war was declared.

He joined the Royal Navy and got his first embarked experience while flying Grumman Martlets from the escort carrier HMS Audacity. Writing in his acclaimed 1962 autobiography Wings on My Sleeve, he commented: “They say that your first landing is either your best or your worst. I was lucky with mine. After that, it seemed easy. I felt the potential artistry of it.” A German U-boat torpedoed and sank the vessel in December 1941, and Brown was one of only two survivors rescued from his lifeboat.

It was after this escape that he began test work, flying with the Royal Aircraft Establishment (RAE) at Farnborough and furthering the UK’s knowledge and expertise operating from aircraft carriers, before moving on to Boscombe Down in 1943. This led to him landing a de Havilland Mosquito on a carrier, and then making history by becoming the first to do the same with a jet fighter. The latter milestone was achieved on 3 December 1945, with a de Havilland Sea Vampire aboard HMS Ocean.

As Flight International reported at the time: “To give a short verbal impression of the Sea Vampire being deck-landed it would only be necessary to stress how easy and simple and practically normal it all appeared.” 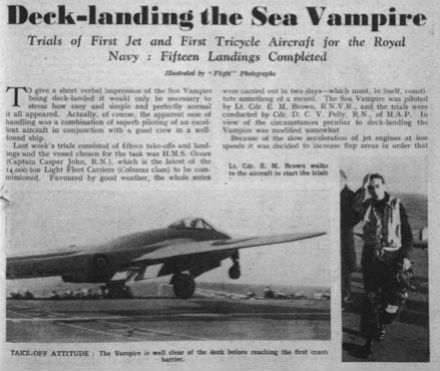 The achievement is one of three official Guinness World Records attributed to Brown, along with his making a lifetime 2,407 carrier landings. But his most remarkable recognition is linked to the astonishing 487 aircraft types that he piloted: a tally that will surely never be surpassed.

Nicknamed “Winkle”, due to his diminutive height, Brown put his skills to full use at the end of the Second World War, as head of the RAE's enemy aircraft flight. This afforded him the opportunity to fly a wide array of German types, including exotic designs like the Dornier Do335, Messerschmitt Me-163 and Me-262. His German language skills were particularly useful in this activity, during which he also interviewed leading industry figures including Willy Messerschmitt, Werner von Braun and Focke-Wulf designer Kurt Tank, as well as interrogating Hermann Goering about the Luftwaffe’s strategy. 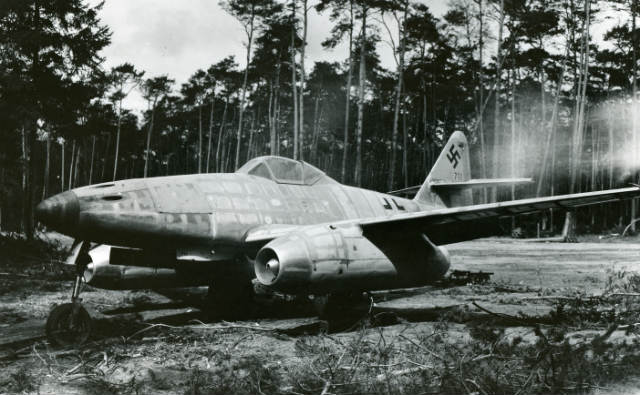 Later he would fly many post-war concepts, including the Saunders-Roe SR/A1 jet-engined flying boat fighter, from which he was rescued after it overturned at speed after hitting a floating object on landing near Cowes. Challenging trials work also included the first aircraft launch from a steam catapult and landing a Sea Vampire with its landing gear retracted on a rubber mat, simulating a carrier deck. The latter concept demonstrated what now appears a bizarre means of reducing aircraft weight, and was subsequently discarded.

After returning to service flying the Hawker Sea Hawk, Brown left military life behind in 1970, as the RN’s most decorated pilot. He subsequently held the posts of president of the Royal Aeronautical Society and chief executive of the British Helicopter Advisory Board, where he championed topics including pilot training and safety.

In a November 1976 article written for Flight International, he underscored the importance of continuous learning – regardless of experience level. “There is always reluctance to go back to school after discarding aerial “L” plates, but private pilots should realise that regular check-outs by a friendly instructor are not only good for the soul but are essential for survival,” he noted.

Despite having long ceased flying, Brown remained a high-profile and hugely respected aviation figure to the very end. As recently as last year he was still attending air shows, including at Duxford and Shoreham in the UK, promoting books, and speaking in public: from addressing the Helitech exhibition to reminiscing on BBC Radio 4’s Desert Island Discs.

He was an aviator of unmatched experience, whose like will truly never be seen again.