Signs at this year’s NBAA convention proclaimed: “The future of business aviation starts here.” For once, there were plenty of indications that 2018 could be a turning point for the sector – 10 harrowing years after the financial crisis – and particularly in its largest market, the USA.

Honeywell’s annual NBAA forecast is rarely downbeat – it is in the engines-to-avionics maker’s interest to predict healthy demand for business jets and the ­products they need to fly. This year, its outlook was particularly rosy, with healthy economies and new programmes spurring demand for 7,700 aircraft by 2028 – a rise of 50 units on last year’s prediction.

With their theme parks and mega casinos, Orlando and Las Vegas – alternating hosts of NBAA – are far removed from real America. However, from Wall Street to Walmart, there is evidence of growing corporate and consumer confidence. Healthy balance sheets and optimism help unlock spending on corporate jet travel.

Another important spur for new aircraft orders is a reduction in the inventory of used equipment for sale. After a period in which many owners of two- to five-year-old business jets would gladly have sold up for a fraction of the manufacturer’s list price, that glut of nearly new aircraft is diminishing.

At the same time, there are more programmes in development than since the heady pre-2008 days, when it was hard to keep up with all the very-light-jet projects. This time, the focus is on heavier metal, with around a dozen programmes or variants in the super-midsize segment and above set to enter service in the next five years. 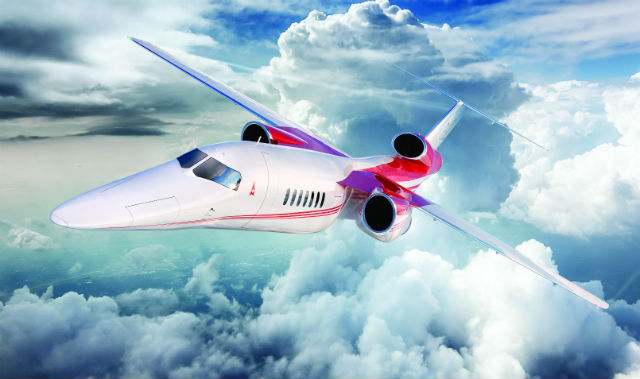 The show also saw the serious emergence of technologies that could take business aviation in two very different directions. Aerion has been nurturing its AS2 supersonic business jet concept (pictured) for a decade, but, having secured key partnerships with GE Aviation and Honeywell, the project now appears to be accelerating.

Simultaneously, electrically powered air transport is moving closer to reality, with Safran and Uber both revealing details about alternative-propulsion projects.

There are dark clouds, of course: the threat of a pilot recruitment crisis for a growing industry, and ongoing problems in Brazil, Russia, India and China, whose orders for large jets helped the industry weather the worst of the storm after 2008.

But with all the activity we expect, the skies could look very different for business aviation by 2028.