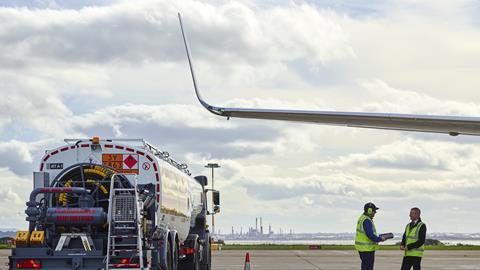 Modern airports are complex ecosystems that rely on thousands of people – passengers, staff, and other stakeholders – being in the right place at the right time. And, for airlines, in today’s ultra-competitive world of tight time slots and rapid turnarounds, minutes matter each time their aircraft is at the gate.

A tardy traveller that causes bags to be offloaded, a snag with air traffic control, a missing fuel truck or problems with paperwork: all can contribute to delays that, combined, are estimated to cost airlines $8.3 billion a year in the USA alone, according to an FAA commissioned report from NEXTOR. 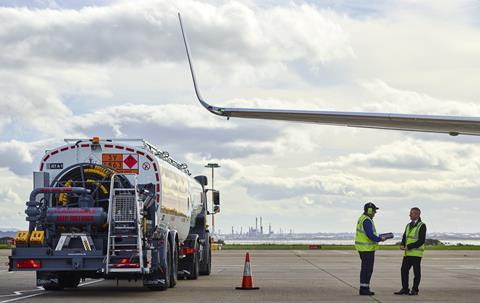 However, one fuel supplier believes it can eradicate many of these inefficiencies through advanced digital technologies. Shell Aviation has been keeping the world flying for over a century, helping Louis Bleriot cross the English Channel in 1909 and Sir Frank Whittle develop the jet engine. It is present at 900 airports, refuelling an aircraft every 14sec.

Today though, its focus goes beyond simply providing the highest quality fuels, lubricants and fluids. Shell Aviation is working with airlines to drive out delays during refuelling, and give them “big data” analytics to monitor and improve their on-time performance.

“From an airline perspective, the currency of refuelling is seconds,” remarks chief operating officer Thomas de Boer. “Minimising delays in turnaround times is one of the most critical aspects of maintaining profitability and delivering the level of service demanded by passengers in today’s busy world. In fact, flight delays cost the aviation industry billions of dollars annually, including direct compensation paid to passengers, costs for missed connections, or staff costs related to under-utilisation of aircraft and airport slots.”

One of these digital tools is what de Boer calls the “only industry-wide, continuous audit of refuelling performance”. On Time Performance Analytics, or OTP, is a piece of software that allows Shell Aviation to track each of its customers’ flights against the aircraft’s schedule, and adjust its refuelling performance if necessary.

While other services focus on data analytics at a site level, OTP is the only solution that assesses fuelling performance across different locations, allowing for benchmarking and identifying trends, and, when needed, taking swift action, says de Boer.

Another innovation is a cloud-connected tablet called SkyPad, which Shell Aviation has developed with SAP and Vodafone. Introduced two years ago and now being used by Shell Aviation refuelling operators at 141 airports in 23 countries, SkyPad swaps hard-copy ticketing for a digitised, real-time platform. Refuelling tickets can be automatically populated with flight information and electronic proof of delivery sent in seconds, eliminating the possibility of human error and, as with OTP, helping airlines reduce the dead time they spend at the gate.

“Whether it’s Facetiming a loved one on the other side of the world, or holding a board meeting by video conference, one of the most valued ways technology continues to benefit our daily lives is through enabling communication,” says de Boer. “And this is also the case for airside operations, where there is great potential for digitalising communication between pilot and fuel operator. That’s why we made a huge step towards our vision of fully digitised operations by introducing Shell SkyPad, connecting our operators who provide the fuel on the apron with office staff and customers throughout the fuelling process.” 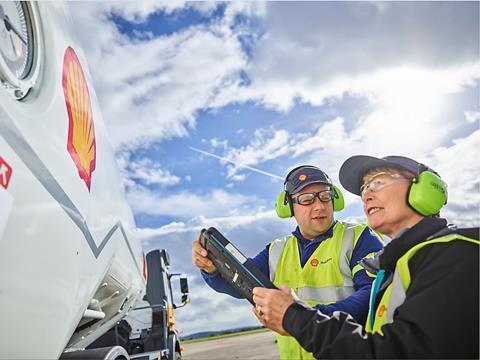 One of the advantages of the tablet, he says, is that it can be used anywhere on the apron, and from small airports to large hubs, where several fuel trucks and data sources can be involved. And, as well as making the refuelling process smoother, it cuts the risk of staff dealing with reconciliations and invoicing errors.

“By harnessing technology at the most pivotal point of refuelling and replacing manual, paper-based systems and processes, this helps us tap into the unlocked potential to maximise efficiency and accuracy from refuelling to billing,” he adds.

When it comes to innovation at airports, de Boer believes that the ramp has lagged behind passenger services in the terminal itself, where “a plethora of smart technology from radio frequency identification tags to biometric passports” are helping make life easier for travellers and service providers alike. However, the advance of digitised systems that have allowed a smoother experience for passengers between the kerbside and gate, is in “stark contrast” to some airside systems, he says.

“Many of these have not progressed at the same speed and rely on antiquated processes and technology, slowing things down and impacting efficiency,” he says. “In a touchscreen world, it seems almost unthinkable that aspects of a process as essential to air travel as refuelling still involve a pen and paper.”

However, he concedes that changing some of these practices may be tricky: “The airside has the added complication of having some of the most stringent safety standards in the world in an incredibly busy environment. It’s no easy task to orchestrate operations in this environment, particularly for our customers.”

Products such as OTP and SkyPad are just two of the digital technologies that are already improving airlines’ turnaround times, and there could be more to come, promises de Boer. “Aircraft refuelling actually sits right at the centre of both some of the most exciting technological developments and significant challenges that are shaping aviation today,” he says. “If we consider the constant challenges for airlines of growing profitably, capacity constraints at airports, using digitalisation to improve efficiency, and the need for the entire industry to reduce its carbon emissions – refuelling plays a critical role in all of these.”

The expected sharp rise in demand for airline travel in the next few year will continue to present challenges for airlines, airport operators and service providers, but it will also spur the development of new disruptive technological solutions, believes de Boer. “It’s essential that the industry is always looking for new ways to optimise all aspects of aviation, whether that’s fuel handing or disembarking passengers from aircraft,” he says. “And this is really the aspect of aviation that excites me most – the fact that innovation never stops.”