Three years ago, for the first time, air traffic controllers were able to pinpoint an aircraft’s position anywhere in the world using a space-based, global automatic dependent surveillance broadcast (ADS-B) network. Today, air navigation service providers (ANSP) responsible for half the planet’s airspace use that technology from Aireon. It has added a new layer of safety oversight and operational efficiency to air traffic management (ATM). 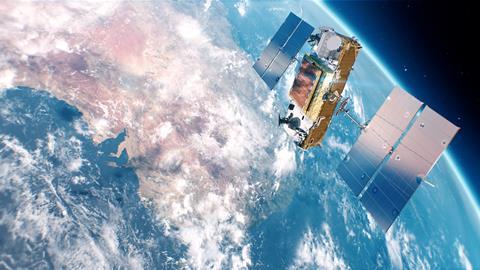 Iridium satellites play a vital role in the technology

Now Aireon is on the next step of its growth path. It is merging real-time intelligence it collects from thousands of commercial and general aviation aircraft with other industry data and analysis to create products that will help a range of organisations, from airlines and airports to aircraft manufacturers and suppliers, become more informed and efficient. “Our goal is to embed data into all aspects of the aviation value chain,” says Aireon CEO Don Thoma.

The Aireon story begins in 2012, when Nav Canada – soon to be joined by four other ANSPs – teamed with Iridium to create what Thoma calls “a revolutionary service for the industry.” The ANSPs would blend their know-how in ATM with Iridium’s in satellites and running a commercial business. The system would use the ADS-B transmissions from an aircraft – but relay these signals by satellite rather than ground stations, enabling no-gaps and providing global coverage.

The commitment of the ANSPs from the start was crucial. “We needed both pieces,” says Thoma. “This was a long-term initiative and a financial investor may not have had the patience. A satellite company does not have expertise in ATM and running a 24/7, safety-focused service, while an ANSP does not know how to launch and operate satellites or exploit big data. This required an understanding of the strategic vision.”

Success certainly did not come instantly. It took seven years to build and deploy the Iridium NEXT satellite constellation on which the Aireon hosted payloads operate. Additionally, the disruption of Covid-19 on ANSP budgets, just months after launch of the service, was another challenge. However, take-up has been impressive, even during the pandemic. Aside from the ANSP shareholders – Nav Canada and its counterparts in Denmark, Ireland, Italy and the UK – some 20 ANSPs, representing more than 40 countries, are customers.

ADS-B technology has been with us for years, radar even longer. However, Aireon’s use of 66 low Earth orbit satellites to intercept aircraft signals means its coverage is universal and uninterrupted. This includes 70% of the world – jungles, oceans, deserts, mountains, poles – where surveillance using ground-based technology is patchy or non-existent. Being able to track aircraft wherever they are provides vital intelligence not just to air traffic controllers but an array of industry players.

How the system works is that broadcasts from the aircraft’s transponder “bounce” off the satellites to Aireon centres. These then convert data into a format an ANSP can use and send it via dedicated telecommunications lines. The process takes place almost in real time, explains Aireon’s Director of Product Management Chris Devlin.

“Aviation has traditionally been data rich but information poor,” he says. “The ANSPs and the airlines generate a lot of data, but that data is limited to their operations. This helps to understand what happened but lacks the context to understand why it happened. We set out to develop products that support the aviation community through access to contextual information.”

Starting from the basis of a safety-grade, global surveillance system, Aireon has been developing products that merge third-party data and analysis to offer customers a competitive advantage and increase their productivity. For example, by incorporating scheduling information and flight plans, AireonFLOW allows ANSPs to plan their airspace several hours in advance. “Our data is global, which means aviation stakeholders now have access to surveillance quality data beyond their borders, powering long-range traffic flow management. This enhanced situational awareness will improve air traffic flow management predictions, which can greatly reduce delays,” says Devlin.

In 2021, Eurocontrol integrated the AireonFLOW data into its Network Manager’s (NM) Enhanced Traffic Flow Management System (ETFMS), and in September, African ANSP ASECNA signed a contract to deploy the technology across its airspace.

AireonINSIGHTS takes it a step further. Pairing third-party data integrations with a data analytics platform, Aireon is able to identify key events of interest that otherwise may not have been observable. “It goes beyond identifying the aircraft’s location, AireonINSIGHTS starts telling the story of what is happening on that flight,” Devlin explains. It can even “serve event-based data” rather than simply “trajectory-based data”, he adds, “for example informing users when an aircraft has left the runway for a taxiway or when an aircraft enters an undesirable state”.

Earlier this year, Boeing selected Aireon to deliver its INSIGHTS data stream, providing historical aircraft data and near real-time aircraft event data for select Boeing aircraft programmes. Vishwa Uddanwadiker, Boeing Vice President of Aerospace Safety Analytics, said at the time of the announcement: “We are investing in a data stream that can be transformed into safety intelligence. We are adding this to our data analytics ecosystem to help predict and prevent safety risks, while identifying other opportunities to strengthen our safety management system.”

Aireon’s latest product launch is Aireon Locate, aimed at providing search and rescue (SAR) teams aircraft location data to use in their operations. Because a stricken aircraft can fly for miles below radar coverage in its last minutes, the service can mean the difference between finding survivors in time or not.

ASECNA is now using the technology across its 18 member states, covering an area of 16.5 million sq km. “ASECNA is always looking to improve aviation safety as part of its vision for the African sky unification,” says Mohamed Moussa, Director General of ASECNA. With the Aireon Locate tool, Rescue Coordination Centers and Rescue Sub Centers in all ASECNA member states will find their response time for SAR activities decreases drastically, moving the launch of SAR operations into seconds, and reducing a search area of square kilometers to square metres.”

More innovations from Aireon are on the way, including analytical tools that use safety data and safety data applications in the advanced air mobility or electric vertical take-off and landing craft. Concludes Thoma: “It’s all about the evolution of the company to build on this asset that we’ve created. Once we start to marry it with other information like aircraft registries and flight plans, we develop a whole new set of insights.