The world had to wait a long time for Concorde to fly. And when it did, Flight International celebrated with a three-page spread of pictures accompanied by bilingual verse from the poet Robert Gordon.

The Anglo-French supersonic airliner programme had been launched in 1962 and the first "Concord" – as it was originally called in English, rolled out in Toulouse in December 1967. Back at that global debut, the original first flight target was 28 February 1968. Even the most pessimistic observers did not expect to have to wait another year – and see the Boeing 747 fly – before the elegant delta would finally take to the air. 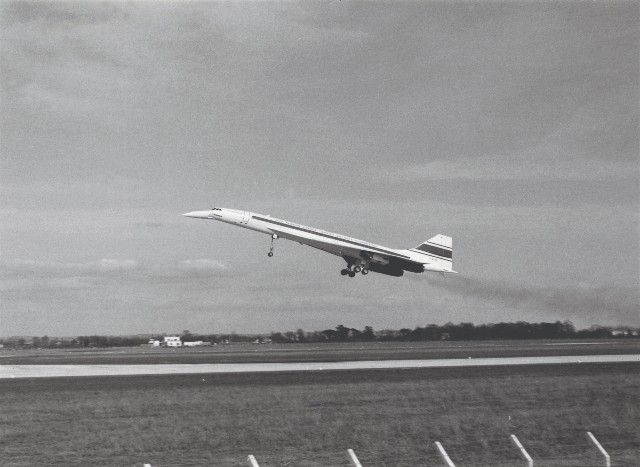 The first flight by the French-built Concorde 001 took place at 15:40 on Sunday 2 March 1969. At the controls for the 29min sortie was Sud's chief test pilot Andre Turcat, with co-pilot Jacques Guignard, flight observer Henri Perrier and flight engineer Michael Retif alongside.

Flight International, of course, was alongside the runway for Concorde's long-awaited moment of truth, and described the scene in our World News report on 6 March 1969: "The historic event was seen by thousands of spectators in the lanes and fields around, and by a far greater audience in France and Britain through the medium of live television, which included excellent air-to-air views."

Describing the take-off, Flight wrote: "The supersonic transport was lined up, power was increased to 80 per cent on the four Rolls-Royce/Snecma Olympus engines, reheat was switched on, and with a rising cloud of smoke behind, she started to roll. After 20sec, with speed approaching 150kt, M Turcat eased the aircraft into a 10° nose-up attitude, speed continued to increase and, with no further perceptible controlling, Concorde lifted off cleanly at 175kt some 25sec and 1,400m from brakes off."

Our correspondent claimed that from his vantage point at the press viewing base near the unstuck point, "Concorde seemed to be making much less noise than we expected." However, he pointed out that the aircraft was at a light weight (240,000lb) and therefore using less power than would later be normal.

"With undercarriage down and the nose visor in the fully drooped position (this configuration was maintained for the entire flight) the climb was continued straight ahead, at about 3,500ft/min, to 10,000ft," wrote Flight.

"After some directional and lateral control effectiveness checks at various speeds every 10kt down to 160kt, Concorde 001 then turned on to a base leg for its approach, and established a powered descent path at 170kt.

"With a Meteor NF.ll chase aircraft still in close company to starboard, and a MS Paris photographic aircraft to port, 001 landed firmly without perceptible flare, smoke from the tyres blowing into the strong vortex and giving a vivid portrayal of this aerodynamic cushion."

Our report added: "With the breaking parachute deployed the landing roll was less than had been needed for take-off."

Our report ended with comments about how the event was celebrated by some of Concorde's airline customers, which seems rather poignant with the benefit of hindsight: "Most significant of all, perhaps were Pan American's huge full-page advertisements in the British national newspapers proclaiming 'Welcome to Tomorrow.'"