A prominent feature of Concorde at take-off and landing is the pendulous nose of the fuselage drooped (at a faintly supercilious angle) to improve visibility from the flightdeck.

The purpose of the hinged forward portion is to give the pilot, when near the ground, forward vision comparable with that in current subsonic aircraft. After take-off the entire nose-fairing forward of the main windshield, including the visor, is raised to give the aircraft a clean aerodynamic external form during subsonic and supersonic flight.

The original down position was 17.5°, but crews preferred the reduced angle to allow them some visual reference when on final approach.

Drooping of the nose is effected by hingeing the entire nose-fairing, with the visor and its actuating mechanism, downward about an axis at the bottom of the forward part of the nose pressure-fuselage. Movement is given by a pair of tandem jacks, working in parallel, each one of which has two cylinders with a common ram.

Irrespective of the position of the nose fairing, the glazed visor can be retracted into the fairing cavity through the top skin-plating. At its forward end, the visor is carried by the actuating arm which is pivoted port and starboard to the foremast rib of the deck structure. At its lowest end, the arm is pivoted to the apex of the inverted A-frame. 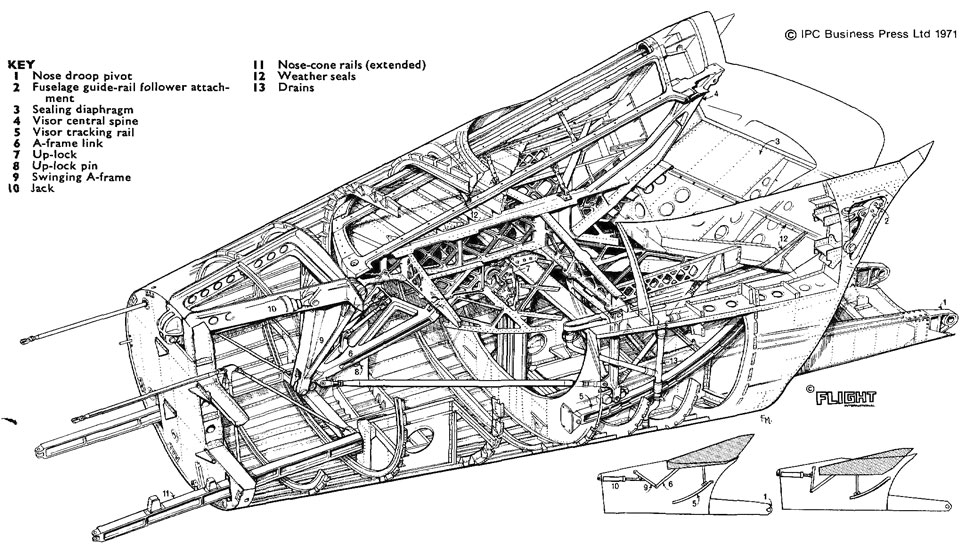 At the after end, the visor is carried by the two rollercarriages at the bottom of the tracking legs; the carriages run on the curved guide-rails at the sides of the fairing structure. When the actuating jack is retracted the A-frame swings about its upper end, drawing the lower end of the visor actuating arm forward. This movement, combined with the guidance of the curved rails, draws the visor downward and forward on a path that takes it below the top panel of the nose fairing and down the slope of the main windshield of the flight deck. 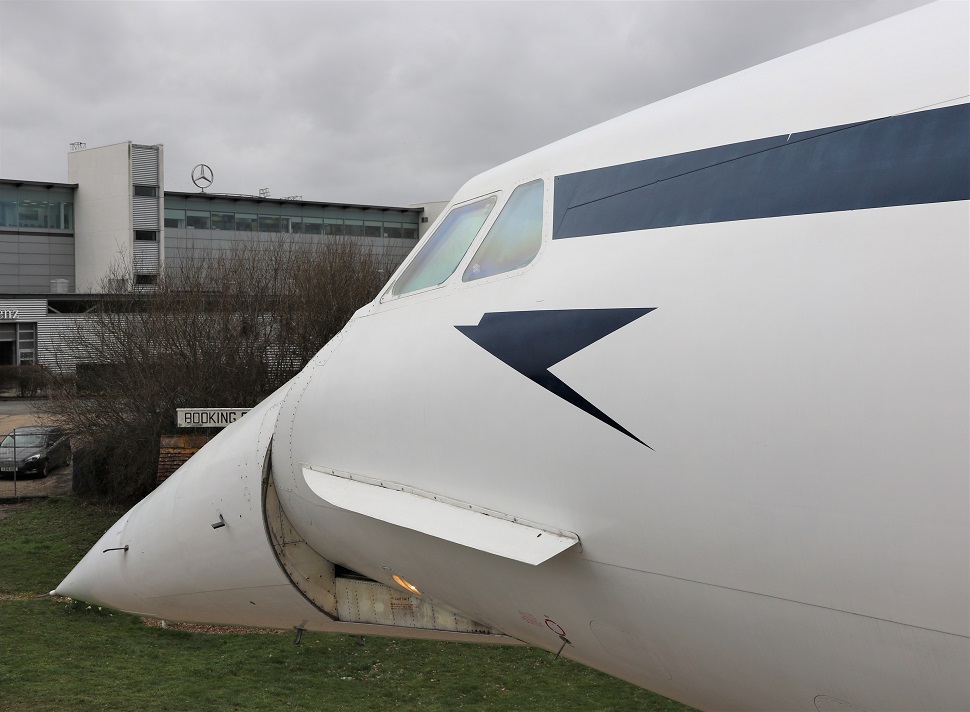 Two hydraulic systems, designated Green and Yellow, are provided for the actuation of the droop nose and visor. Normally, operation is by the Green system with the Yellow available for standby. Operating time for the visor is approximately 6s. The nose can be fully drooped in 12s and raised in less than 19sec.

Read the full article from 1971 on Concorde’s nose and visor system in the Flight archive.