Crashed An-12 descended far below Lviv glideslope in low visibility

Ukrainian investigators have disclosed that the Antonov An-12BK which crashed at Lviv two months ago had descended far below the glideslope during a low-visibility approach in darkness.

Investigation authority NBAAI says the Ukraine Air Alliance aircraft was arriving for a technical stop to refuel as part of a service between Vigo and Istanbul on 4 October.

It captured the ILS localiser for Lviv’s runway 31 and the crew was given a visibility update. The altimeter was set to the correct QNH level, and landing clearance was received and confirmed by the crew.

But at a distance of 6km (3.2nm) from the threshold the aircraft – travelling at 170kt – started to descend “significantly” below the glidepath, says the inquiry in its preliminary findings.

It continued to descend to a height of just 100m (330ft) while still 3.3km from touchdown, when an aircraft would normally have been flying at 190m (620ft) for a typical 3° glideslope. 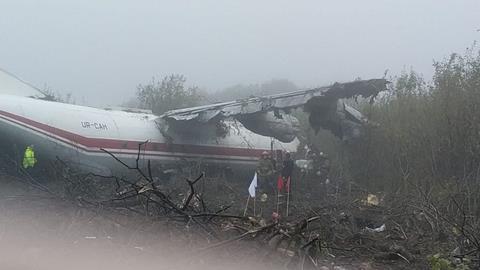 NBAAI says the An-12 was travelling “almost one-half as high as the glidepath” and, at 60m, an alarm sounded indicating the decision height had been reached.

“No crew member responded [to the alarm],” says the inquiry.

At a distance of 1,359m to the threshold the aircraft started to strike trees at a height of just 5-7m, and contacted the ground, sustaining heavy damage as it cut a 230m swathe through woodland.

Although the crash occurred at 06:43 and Lviv tower sounded an alarm at 06:49, the inquiry says the rescue teams did not locate the wreckage until 04:41 – over 50min later.

None of the five crew members survived, and the three other occupants of the aircraft suffered serious injuries.

No information has been disclosed on the aircraft’s fuel situation, although the inquiry says that, up until the beginning of the final approach, the flight had proceeded normally with “no deviations or abnormalities”.

Investigators state that Ukraine Air Alliance’s dispatch service advised the crew, before departure from Vigo, of a forecast temporary reduction in visibility at Lviv to 500m, with slight rain and fog. This deterioration, however, was a temporary forecast with limited validity.

The An-12 was 2h 20min late in departing Vigo and this delay, says the inquiry, meant the aircraft arrived just as the visibility had fallen to just 150-300m.

NBAAI is examining various aspects of the approach, including the airport lighting, and is scrutinising the carrier’s operations manual – pointing out that much of it focuses on flights in North America, including setting the altimeter using a scale in inches.

Investigators are also examining the crew’s duty periods over the three days prior to the crash, during which they logged almost 34h of working time with 17h rest.

Over the course of 1-4 October the crew conducted transatlantic services from Santa Maria to Toronto and Toronto to Toulouse, before flying from Toulouse to Vigo, the departure point of the fatal flight.