American Airlines and LATAM Airlines Group promise millions of dollars in consumer benefits in their application to US authorities for an immunised joint venture.

The Oneworld Alliance carriers tout up to $273 million in annual benefits from their proposed tie up that would cover flights between the USA and Brazil, Chile, Colombia, Paraguay, Peru and Uruguay if approved, in an application to the US Department of Transportation on 3 April. Benefits include improved connectivity, better passenger amenities and even new routes.

"The [joint venture] will integrate highly complementary route networks—with one anchored in the United States and the other in some of South America’s largest and most vibrant economies—to produce the kind of integrative, pro-competitive efficiencies that the [DOT] has observed from joint businesses implemented elsewhere worldwide," say American and LATAM. 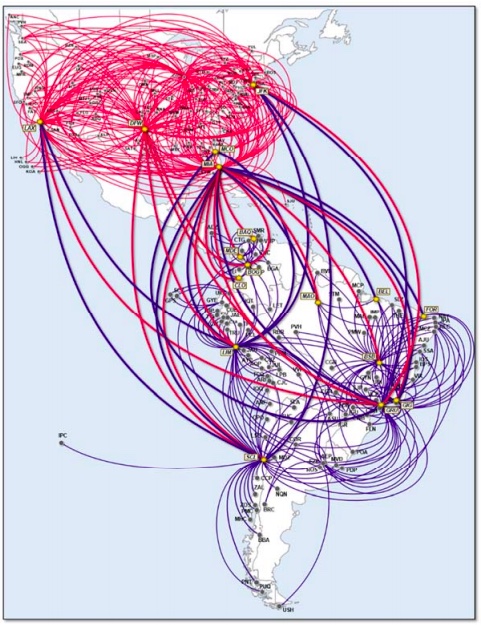 The partnership, which was announced in January 2016 but was held up by a myriad of factors including the delayed ratification of the US-Brazil open skies treaty, would combine the two largest US-South America networks. American flew 26.7% of capacity between the markets covered, and LATAM 26.5% of capacity in 2018, Cirium schedules data shows.

The next largest carrier, United Airlines, had a 13.2% share of capacity in the market last year.

Despite their clear market dominance, American and LATAM claim that they need an immunised joint venture to compete – and grow – against other carriers and expanding low-cost carriers. They cite the proposed Avianca, Copa Airlines and United joint venture, as well as JetBlue Airways' and Spirit Airlines' growing US-South America networks in their application.

American and LATAM, in addition to a stronger competitive position, say the joint venture will allow them to "increase frequencies, upgauge routes and add new flights". Potential new routes include Miami to Belo Horizonte and Recife in Brazil, and Sao Paulo Guarulhos to Austin and San Jose (California).

The airlines note that, absent a joint venture, neither has been able to make the Miami-Belo Horizonte route work. American dropped the market in 2018 as part of a larger rationalisation of its South American network.

In addition, they paint a doomsday scenario where without a pact they would increasingly compete with each other - dropping codeshare routes and making more markets uneconomic.

Claudia Sender, senior vice-president for customers at LATAM, told FlightGlobal in March that the carriers hope to implement the joint venture by year-end, pending US approval. Approvals are in hand in South America, with only a court case against the tie up pending in Chile.

"We hope to move as fast as possible," she said.

US approval by year-end may be wishful thinking for American and LATAM. The DOT took just over two years to approve a joint venture between Aeromexico and Delta Air Lines, the last entirely new tie-up it has signed off on. The regulator continues to evaluate a joint venture application from American and Qantas Airways that was filed in February 2018.

The American-LATAM deal would replace existing antitrust immunity the airlines have between the USA and Chile and Peru. That partnership does not include a joint venture and excludes the largest markets, including between Miami and both Lima and Santiago.