The proposed deal would be conducted under the US Foreign Military Sales (FMS) mechanism, the DSCA said in a statement. Its announcement follows a request from the government of Australia.

The DSCA named Boeing as the prime contractor for the deal.

If Canberra decides to move forward with the deal, it will give the Royal Australian Air Force (RAAF) a dedicated electronic warfare capability for the first time in its history. To fully develop tactics and procedures, the RAAF will likely work closely with the world's only other operator of the EA-18G, the US navy. 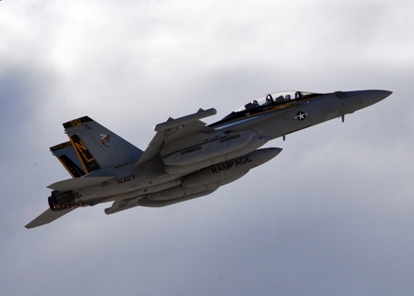 In early April, Australian minister for defence Stephen Smith announced a A$19 million ($18.6 million) purchase of "long lead item electronic equipment" that would allow it to reconfigure 12 Super Hornets to the Growler standard.

"The decision to purchase this equipment has been made now to ensure Australia continues to have potential access to the Growler technology," said Smith in the April announcement.

"A final decision on whether Australia converts some of its Super Hornets to Growler configuration will be made after exhaustive assessment by the government this year. This purchase ensures Australia will continue to have access to specific technologies needed to make any such conversion."

In 2009, Australia spent $35 million for the modification of 12 yet-to-be delivered Super Hornets so that any future Growler upgrade would be less invasive. Australia operates 24 Super Hornets.