Rolls-Royce’s eight-year journey to develop the T56 Series 3.5 engine upgrade package for legacy C-130 aircraft is about to bear fruit following the US Air Force’s “Milestone C” decision last week to commit the programme to production and deployment.

Tom Hartmann, senior vice president of customer business for Rolls-Royce Defense, expects to be on contract with the air force for an initial 14 upgrade kits this month and another order of 36 is expected in fiscal year 2016.

The initial contract is valued at $38 million and is the start of what could be a long-running engine improvement programme. It also helps Rolls-Royce as the company pitches the Series 3.5 upgrade to the global C-130 market – with well over 400 legacy Hercules still in service. The USAF is by far the largest customer, with a fleet of over 200 legacy C-130s.

“They expect a $2 billion saving between the fuel and the life-extension maintenance improvements,” Hartmann said in a 9 September conference call. “We’ve been waiting for the USAF to declare Milestone C so that the other air forces know the USAF is fully on board.” 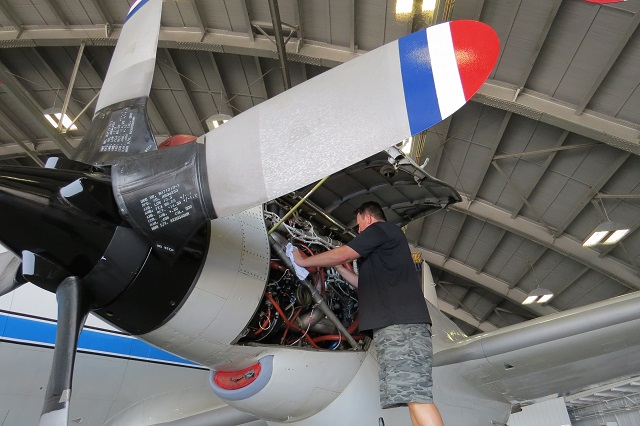 The enhancement is installed as part of a routine engine overhaul, and the air force plans on competing that depot work separately.

In August, the US National Oceanic and Atmospheric Administration’s first WP-3D “Hurricane Hunter” aircraft equipped with the Series 3.5 package was tasked to monitor Hurricane Danny in the Caribbean, and the flight further validated results from an initial flight in June.

“They got significant fuel savings, which turns into a longer time on station for them,” says Hartmann. “[The mission] went from about 8h to 10h.”

The company is targeting any aircraft powered by the T56 Series 3 engine, including the P-3 Orion submarine hunters of Taiwan, Germany and Japan as well as the 70 commercial Lockheed L‑100 Hercules still in service around the globe.