A380 powers on through flight-test

Airbus is approaching the quarter-distance mark in the A380 flight-test programme, having cleared a number of key hurdles, but still faces a daunting 10 months of trials to complete certification and prepare the aircraft for entry into service with Singapore Airlines at the end of 2006.

“We’re on schedule” is the message from Airbus A380 flight-test and programme management executives as the ultra-large aircraft is prepared for the critical next stages of the test effort. The flight envelope has been cleared, and the difficult negotiations with customers to reschedule deliveries following the programme slippage have been completed. While there is an aura of quiet confidence in Toulouse that the A380 programme will be able to keep to its revised timetable, the company can barely disguise its anger and surprise over the recent interim recommendations by the International Civil Aviation Organisation (ICAO) to greatly increase separation distances for the aircraft. More on that, later. 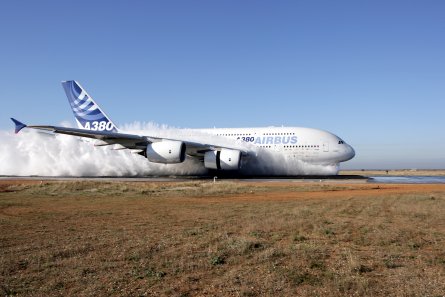 By the beginning of December the three flying A380s had completed 586 of the expected 2,500 flight hours, and 161 flights, and the fleet is averaging 65-70 flight hours a month. Airbus senior vice-president flight test Claude Lelaie says that a total of 43 pilots have now flown the aircraft, including representatives from customers and from European and US aviation authorities. “The first customer airline pilots flew the aircraft after the Dubai air show when we had eleven Emirates pilots – including three who had never flown an Airbus – fly two touch– and goes each at Ras Al Khaimah,” says Lelaie.

The successful demonstration of the A380’s maximum design speed (Vmd/Mmd) of Mach 0.96 on 1 December marked the completion of the opening of the A380’s flight envelope, with flutter testing having been concluded in November. Lelaie says that a Vmd attempt earlier in the flight test programme had to be aborted at Mach 0.93 “when we detected a shock wave, but this was rectified by calibration”.

Lelaie says that the A380 was dived from around 39,000ft (11,900m) and “reached Mach 0.96 quite easily with a lower rate of descent than previous Airbus aircraft – the pitch down attitude was only 7˚– which shows that its drag is low”. Initial water ingestion trials at the Istres test centre have been carried out, with the A380 being accelerated to and decelerated from 70kt (130km/h) through a water trough, but these tests will have to be completed once some modifications are incorporated, says vice-president flight tests Fernando Alonso. “We had to abort the test as some hydraulic pipes to the brakes were bent,” he says.

Alonso says that MSN004, which joined the flight test programme on 18 October, is dedicated to performance measurements and engine development. “It completed the main evaluation of cruise performance on 9 November and there are complementary evaluations continuing until the end of December”. Lelaie says there are indications that the A380 could end up cruising slightly faster than its nominal published speed of M0.85: “We’ll have to wait for all the results before we know for sure,” he says.

MSN004, which spent a week at the Dubai air show in November wowing the crowds in its Emirates colour scheme, is mid-way through an extensive two-month evaluation of low-speed performance test. Lelaie says the next major task for the flight test team is to fine-tune the fly-by-wire flight control rotation law.

Meanwhile, in October, MSN001 was used for four days of noise evaluation tests at Moron air base in Spain, where Airbus verified whether the target for the A380’s external noise levels can be achieved with current configuration. The aircraft completed over 100 flyovers to measure approach and take-off noise. Alonso says that final noise tests need to be completed, when fairings for the landing gear designed to further attenuate noise may also be trialed, as they were not ready for the Moron session.

Cold soak trials are set for early in 2006, while the maximum-energy rejected take-off test will be undertaken at Istres, France, and is currently planned for March/April, says Lelaie. “The braking system is not yet fully tuned,” he adds.

Since the beginning of the flight-test programme, Airbus has been monitoring wake vortex measurements at Toulouse and Istres, and while it acknowledges that the data collected so far indicates that A380 levels are slightly higher than the 747, it cannot understand why ICAO has decided to create a special category for the A380 over and above any other aircraft. Airbus will fly a back-to-back test during 2006 involving an A380, a 747-400 and a 777, as well as an A320, to generate some solid comparative data for analysis.

Alonso says that Airbus was “quite surprised” by the ICAO “interim policy” letter issued on 10 November, which recommended a dramatic increase in the separation requirements for the A380 from the standard “heavy aircraft” distances of 4nm, 5nm and 6nm (7km, 9km and 11km) during approach, depending on the size of aircraft following, to 10nm regardless of the category in trail (see graphic). ICAO has also increased the 5nm cruise separation to 15nm for the A380. “The ICAO policy is based on a type of computation that has not been validated by flight test measurements – we disagree with its recommendation,” says Alonso. He adds that “there has been no demonstration that the 747 is the limit for the ‘heavy’ category”.

Meanwhile, Airbus chief operating officer and head of the A380 programme Charles Champion says that A380 production is ramping up in Toulouse and at plants across Europe: “A total of 11 A380s have been assembled, including the static and fatigue test specimens. Final assembly in Toulouse of the 10th flying airframe (MSN010 – the fifth SIA aircraft) began in early December,” he says. Champion adds that at other Airbus plants production of sections for MSN025 is underway, as is parts manufacturing of components for MSN030. 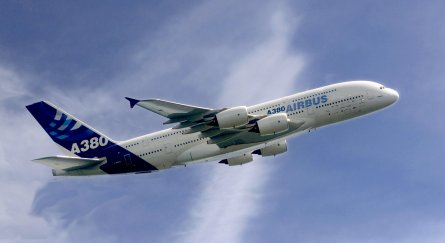 Although testing has gone fairly smoothly, Airbus has carried out several unscheduled removals of Rolls-Royce Trent 900 engines. Champion says that MSN001 has suffered two engine-related incidents: “Engine 4 was changed at the end of September because of too high oil consumption, and then on 24 October engine 1 suffered an in-flight surge because a bolt was lost due to high-cycle fatigue,” he says. R-R asked for engines 2 and 3 to also be changed as a precautionary measure, he adds.

On MSN004, engine 1 was changed due to increasing oil consumption, as a precautionary measure because the aircraft was going to Dubai for the air show. “The replacement engine, which is a new standard, is giving promising results,” he says.

Completion of the first of two test A380s with fully furnished cabins is underway at Hamburg and the aircraft (MSN002) is due to return to flight testing in April ahead of operating a series of “early long flights” in May from Toulouse with Airbus personnel on board. “We will make a virtual first flight of the cabin of MSN002 in March on the ground with full passenger complement and ground infrastructure,” says Champion. Prior to this, a similar exercise will be undertaken using the “Cabin Zero” test rig in Hamburg with a limited number of passengers.

MSN002, which is tasked with 500h of flight testing, is being equipped with a 474-seat, three-class cabin. However, before being completed the cabin will be modified into a high-density 853-seat arrangement for the evacuation trial in around March, says head of A380 industrial design Michael Lau. “This will be achieved by removing bulkheads and galleys to incorporate the extra seats,” he says.

The fourth test A380, MSN007, is due to be ferried to Hamburg for its cabin installation in February, and is set to undertake the route-proving programme in around August. It will later be re-engined to conduct route proving of the Engine Alliance GP7200-powered version.

Assembly of the main Engine Alliance flight test aircraft (MSN009) has been completed, and its first flight is scheduled for April. Champion says certification of this version is expected in the first quarter of 2007 to enable deliveries to begin to launch customer Emirates in April 2007.

After the damaging impact of the six-month A380 programme delay that Airbus announced in mid-2005, the company is redoubling its efforts to ensure that everything remains on the new schedule and has redirected industrial resources within the organisation. “The A380-800 is our number one priority,” says Champion. “We’ve increased engineering resources, established an electrical plateau for electrical harnesses [an area blamed for the delay] and created an Airbus centre of excellence for electrics.” Champion adds that to meet resource requirements Airbus has increased its subcontracting and is also recruiting “but there is a lack of skills on the market”.

The ground test effort is proceeding on schedule, with load trials on the static test specimen in Toulouse almost completed. “We’ve completed 11 of the 12 ultimate load cases, and achieved up to 1.3 limit load with the maximum wing bending. Tests will be completed early next year,” says Champion.

So despite some teething problems that are to be expected in any test campaign, the signs are good that the A380 will be ready to begin earning money a year from now. But new, unexpected pressures like the ICAO separation row mean that the manufacturer cannot relax for moment.