Irkut has completed an initial test installation of the Russian-built Aviadvigatel PD-14 engine on an MC-21-300 rig.

The domestically-powered version of the aircraft will be designated the MC-21-310, says state technology corporation Rostec.

Installation of the first PD-14 on an MC-21 wing and pylon has been conducted at the Irkutsk aviation plant.

Rostec says the attachment work has “confirmed the correctness” of the powerplant’s design. 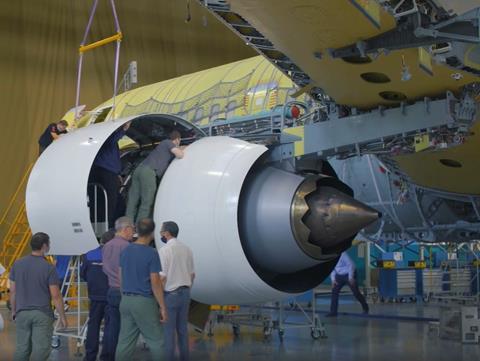 He says the installation has been “successful”.

Rostec says that, following the fitting, “improvements” are being made to structural sections of the engine and airframe.

Systems for the first MC-21-310 test aircraft are being implemented on the airframe undergoing final assembly. The PD-14 will be installed on the prototype for ground tests. No firm date for flight tests has yet been disclosed.

Four flight-test MC-21s – powered by the rival Pratt & Whitney PW1400G engine – have already been assembled and are operating as part of the certification campaign.

Engineers fitted doors and reverse-thrust systems to the PD-14