Ukrainian outsize cargo specialist Antonov Airlines is to offer its An-225 for commercial service, to provide additional capacity to the freight sector.

The An-225, with a maximum take-off weight of 640t, is the world’s largest operational transport and is intended to complement Antonov Airlines’ fleet of seven An-124s.

Antonov Airlines claims there is a “surge” in demand for An-124 capacity, but the global fleet availability for the type is “very limited”.

One of Russian carrier Volga-Dnepr’s An-124s was badly damaged in an accident at Novosibirsk in mid-November, and the operator subsequently suspended services with the type pending results of the investigation.

Antonov Airlines returned the An-225 – the sole example of the aircraft, registered UR-82060 – to flight earlier this year, following a long period of maintenance and upgrade work, and it was recruited into pandemic-related medical and humanitarian transport work. 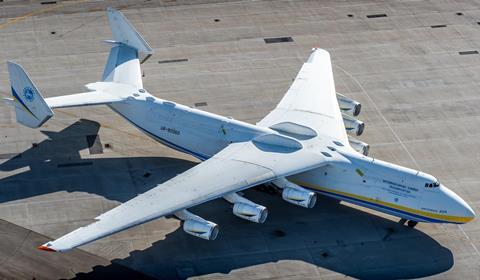 But the carrier says it will place the aircraft in the commercial market, after routine maintenance, to provide extra airlift in the outsize sector.

“[We are] doing our best to help customers in this difficult situation and support them worldwide.”

Developed from the An-124 platform for specialised operations including carriage of the Soviet Union’s Buran space shuttle, the An-225 has a stretched fuselage, broader wingspan – accommodating six engines – and a characteristic twin vertical fin.