China’s three largest carriers carried more passengers across their networks in May — the first month-on-month increase since the start of the year, when the coronavirus outbreak pummelled travel demand.

Domestic passengers made up the lion’s share of the number of passengers carried, as the outbreak showed signs of stabilising in Mainland China and domestic travel restrictions eased further. 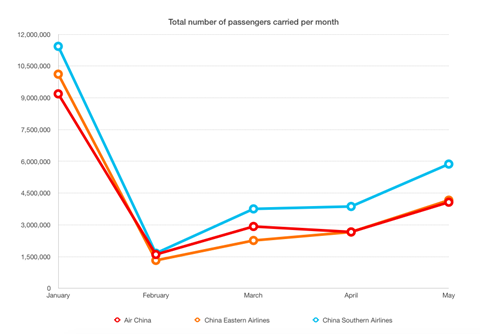 Total number of passengers carried from January to May

For the month, Air China carried 4.07 million passengers across its network, a 53% increase compared to April. This was still about 57% lower year-on-year, however.

Overall ASKs climbed about 38% month on month, but declined about 53% compared to 2019. Overall RPKs grew 46% compared to April, with domestic and regional RPKs showing larger increases. Compared to May 2019, China Southern’s RPKs were about 61% lower.

Lastly, China Eastern carried about 4.17 million passengers in May, a 56% month-on-month jump. Compared to May 2019, however, this represented a 62% drop in passenger numbers.

Overall ASKs climbed nearly 50% month-on-month, led primarily by a growth in domestic capacity. However, it was about 61% lower year-on-year.

RPKs, meanwhile, grew by nearly 51% month on month, but shrank about 69% year-on-year.

Passenger load factor for the month was 64.6%, a marginal 0.4 percentage point increase compared to April.

The Civil Aviation Administration of China reported in early June that Chinese carriers carried more than one million passengers in a day on 5 June — the first time in more than four months since the outbreak struck.