IAG has disclosed that it is holding on to the Airbus A350s previously ordered by Aer Lingus, but has yet to determine where best to deploy them.

Its remaining five A350s had remained listed against the Irish carrier in the Airbus backlog until June this year when they were reclassified as being assigned to undisclosed customers.

“We basically wanted to have additional flexibility with those A350 orders,” said IAG chief financial officer Steve Gunning, speaking during a half-year briefing on 30 July.

“We haven’t come out of those orders. But we’re holding them centrally now, and will determine where we want to put those aircraft in the future.” 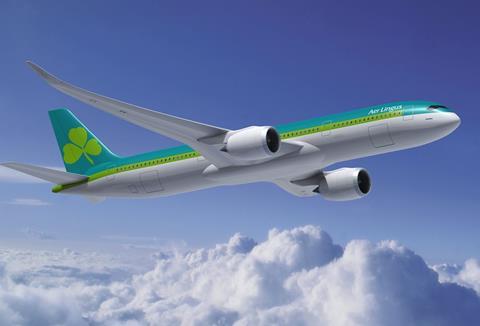 Aer Lingus chief executive Lynne Embleton insists the decision does not amount to a change in the network strategy.

She says the short-haul network – currently centred on “where we can fly and generate cash” – will continue to feed a Dublin hub, and while the A350s have “come out of the Aer Lingus fleet plan” the carrier still has A330s to serve primarily North Atlantic routes. Embleton adds that the carrier’s A321s give it the chance to reach other points in North America.

“The focus remains on Dublin still, with potential for long-haul flying out of Shannon next year still being a question for us,” she says.

Embleton also believes Aer Lingus has a “good opportunity” to combine its A330s and A321s to “test out some new markets” following its securing of a UK air operator’s certificate for Manchester services. The airline intends to open a Manchester base in September.

“If Manchester is successful there’s no reason why we couldn’t consider expanding into other markets – but it’s one step at a time,” adds Embleton.

Gunning says IAG received five new aircraft over the first half of this year and expects another 10 in the second.

He adds that the company is set to receive a “significant number” of aircraft next year, although the figure will not be higher than that of 2020. IAG took 34 aircraft last year including 19 for British Airways.

Gunning points out that IAG did not cancel aircraft orders last year and has not “derailed” its order book, because the company has a commitment to the environment and decarbonisation through the acquisition of modern jets.