Pakistan is in the process of retrofitting its 50 Chengdu/Pakistan Aeronautical Complex JF-17 fighters to an improved Block II configuration.

Mahmood spoke to Flightglobal at the Pakistan booth at Airshow China in Zhuhai. He was part of a 20-strong delegation from Pakistan, which also brought a single JF-17 to appear in the static display. 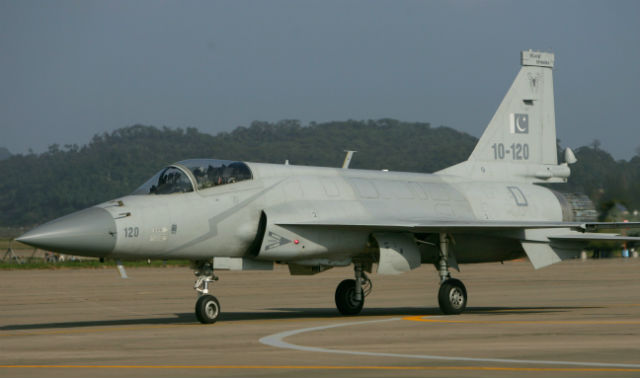 Pakistan brought large contingents to the 2010 and 2012 shows, which included three JF-17s, transport aircraft and the nation’s display team. Mahmood scotched speculation that the pared-down presence reflects any change in Pakistan/China relations.He says the two countries still have an excellent working relationship, and notes that Pakistan sent a squadron of 18 JF-17s to a recent air combat exercise in western China.

Given the small size of the combat fighter, a fixed refuelling probe was found to be preferable to a retracting one. Pakistan uses the Ilyushin Il-78 to provide air-to-air refuelling for its fleet.

In December, Pakistan will begin taking delivery of 50 JF-17s configured in the Block II configuration. Beyond this, its air force has options to take its fleet of the type up to 150 or 200 aircraft. Additional improvements are foreseen in a planned Block III upgrade.

Mahmood adds that the air force is satisfied with the fighter's Klimov RD-93 engine. The powerplant can currently be operated for up to 800 flight hours between overhauls, but there is an effort under way to improve this.Mahmood reveals that the type has seen combat in western Pakistan, where it has employed both guided and unguided munitions.