Spread over about 71,000sq miles2, the state of Washington is home to diverse climates, with the Cascade mountains dividing a temperate rainforest in the west and semi-arid steppe in the east. It is also home to a diverse aerospace industry – anchored by Boeing.

On the state’s southern border with Oregon is a thriving band of suppliers of unmanned air systems, including some of the original innovators in that rapidly growing field. Insitu, now owned by Boeing, was established in 1994 to design long-endurance, small UAVs and serves clients ranging from climate researchers and the fishing industry to the US and foreign militaries. One Insitu founder, Tad McGeer, has established a start-up called Aerovel, and is marketing the Flextrotor tailsitter UAV to many of the same customers. A state-focused unmanned systems industry council counts a diversity of suppliers, including UAV radar developer Echodyne and engineering firm Applewhite Aero.

The UAV council was modelled on the Washington State Space Coalition, a group formed to represent the interests of a rapidly growing group of pioneering space companies. In 2005, Amazon founder Jeff Bezos established Blue Origin in Kent, south of Seattle, to develop and manufacture the New Shepard space capsule and BE-3 rocket engine, with suborbital tourist flights now scheduled to launch next year. Follow-on programmes based in Kent are developing the New Glenn orbital rocket with 7m (23ft) diameter BE-4 engines as well as the still-mysterious New Armstrong vehicle. 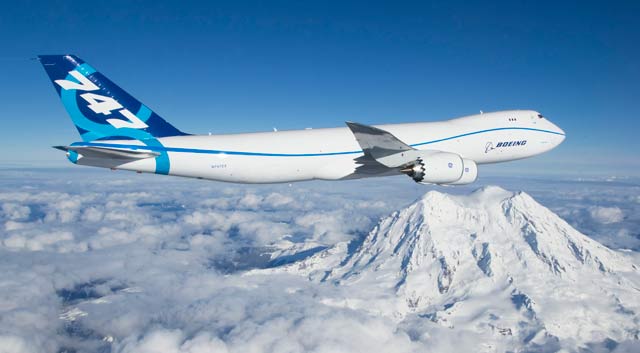 But the UAV and manned commercial space markets could still be years or even decades from fulfilling their potential. Insitu and Blue Origin are growing, but still represent a fraction of the aerospace jobs devoted to serving traditional commercial and military aviation and space markets.

Their numbers include Mukilteo-based aerospace automation specialist Electroimpact, which, despite its proximity to Boeing’s final assembly centre for widebody aircraft in Everett, got its start by supplying robotic riveting machines to Airbus factories in the UK and France. Despite a few such geographical anomalies, the majority of aerospace suppliers owe their presence in the state to the company founded by William Boeing in 1916 on the Duwamish River south of Seattle.

Some major suppliers, such as Bellevue-based Esterline, are headquartered in the area. Others, such as Honeywell, United Technologies Aerospace Systems, B/E Aerospace and Triumph, operate major research and production facilities with multiple locations in the state. Toray Composites is based in Japan, and in 2015 opened an expansion of a factory in Frederickson originally built to support the 787 – then enlarged it to accommodate the growing needs of the composite wing for the 777X. New arrivals, such as Mitsubishi Aircraft, have been drawn to the area to exploit the available aerospace talent.

Boeing itself pervades the Puget Sound region. The company’s final assembly sites for widebody aircraft in Everett and narrowbody aircraft in Renton are well-known, but form only part of the state-wide presence. Boeing fabricates aerostructures in Puyallup and Auburn, machines wing panels and manufactures composite components in Frederickson, and operates flight test bases for commercial and military aircraft out of airports in Moses Lake and King County.

Washington state’s fortunes have tended to rise and fall along with Boeing, which has a mixed financial record over the past five years. Overall commercial aircraft deliveries have grown by about a quarter since 2012, but operating earnings at Boeing Commercial Airplanes have declined by about a third over the same period. Once highly profitable assembly lines, such as for the 737 and 777, are transitioning to new models. The 787 is ramping up deliveries, but still playing catch-up on recovering from the costs accumulated during the aircraft’s extended development phase.

For Boeing’s employment in Washington, the results are also mixed. In 2011, Boeing signed a landmark deal with the International Association of Machinists and Aerospace Workers (IAM), which guaranteed that the 737 Max will be built in Renton for at least the next decade. Two years later, IAM members narrowly agreed to concessions demanded by Boeing in return for guaranteeing final assembly of the 777X in Everett and the manufacturing of the composite wing in a newly opened adjacent facility. State officials also became involved, with the legislature approving $8.7 billion in tax breaks to keep the 777X final assembly and wing production in the state. 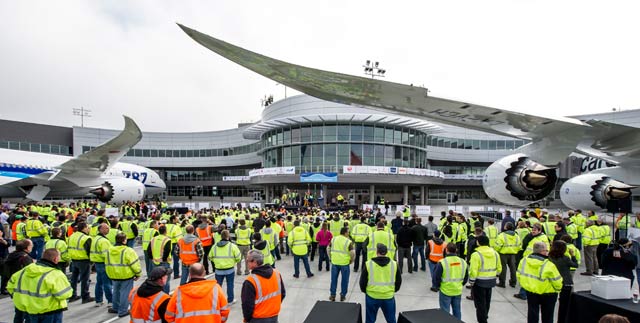 Build it and they will come: new Everett delivery centre, 2013

Despite those long-term gains, Boeing’s employment figures in the state have steadily declined. As of 23 February, Boeing employs 71,036 workers in Washington state, which is down by 18.4% from the modern peak of 87,023 workers in October 2012. Boeing chief executive Dennis Muilenburg has announced plans to continue cutting labour costs this year.

However, Boeing’s employment data does not suggest that Washington is being singled-out within the company for head-count reductions. Overall employment within Boeing has declined by 15.8% over the same period, or only 2.6 percentage points less than reductions in Washington alone. By comparison, Boeing’s employment in California has plummeted 27% over the same period, as the last C-17 was delivered from Long Beach and the company reduced activities in Anaheim and Huntington Beach. Other major Boeing sites, meanwhile, have not gained at Washington’s or California’s expense, as employment levels in Missouri and South Carolina have remain essentially unchanged over that period.

In the near-term, the company’s position in Washington looks relatively stable. The 737 Max will begin a steady ramp-up, potentially reaching a peak of 57 deliveries a month. The 777X will begin its production ramp-up phase in 2020, with both the fuselage and wing (with the exception of the winglets) developed and manufactured within the state.

For the long-term, the critical question is the fate of the so-called middle of the market aircraft (MoM), which Boeing is considering to replace the 757. If Boeing decides to launch the programme, a move which could come next year, it will have an ideal opportunity to open a competition among labour groups, states and even countries to win positions in the supply chain for assembly of major sections and final assembly.

Unlike the 777X, which re-uses the fuselage and wing of the original model, or the 737 Max, the clean-sheet MoM has no industrial legacy, no pre-existing supply chain. Although it will no doubt be designed in and marketed from Washington, the manufacturing, flight test and delivery of the aircraft could be performed anywhere. Interestingly, the current IAM union agreement with Boeing expires in 2023, meaning the location of the MoM could play a key part in contract negotiations. State lawmakers in Washington’s capital, Olympia, will surely take a keen interest, as US southeastern states are likely to make aggressive offers to land another aerospace final assembly line.

The market for the MoM itself is uncertain, but the project is significant beyond its numbers. Its technology and configuration is likely to be adopted for Boeing’s 737 Max replacement. The location that wins the final assembly line for MoM will have a natural advantage to produce the aircraft that follows the 737.

Speculation of Boeing’s departure from Seattle has existed almost as long as the company itself, a tradition for which the company largely has itself to blame. In a story first retold in Richard C. Berner’s 1992 history of Seattle’s economy, an attorney acting on Boeing’s behalf showed up at a city council meeting in June 1921, carrying an invitation from the city of Los Angeles for Boeing to relocate and threatening to do so unless the city paved the streets around Boeing’s small factory.

The community stepped up to answer Boeing’s demands 96 years ago, enabling one of the longest-lived civic-industrial relationships in modern economic history. To keep Boeing Commercial Airplanes concentrated in Seattle for another century, the city and its employees will again need to respond to Boeing’s economic demands.