When Pan Am played its pivotal role in the creation of the 747, it was arguably the world's most ­powerful airline, headed by one of the most dynamic and influential leaders of the airline industry's first century, Juan Trippe.

In October 1955, a decade ­before he brought the world the 747, Trippe had fired America into the jet age when Pan Am placed launch orders for 45 Boeing 707s and Douglas DC-8s. And the New York-headquartered airline was still at the top of the tree in January 1970, when it inaugurated jumbo jet services on the route between New York and London.

By then, Trippe had retired from Pan Am, handing over the reins in 1968, at age 68, after being chief executive of the airline that he founded for more than 40 years. The Yale graduate and student of aviation at MIT and Pensacola Naval Air Station became Pan Am ­president in 1927, aged 27. The airline's journey to global success all began with an exclusive mail ­contract from President Machado of Cuba for the route between Key West and Havana.

Trippe's 747-creation accomplice, Boeing president Bill Allen, also moved on in 1968 – after almost a quarter of a century leading the US manufacturer – when he became chairman. Allen died in October 1985, four years after Trippe. 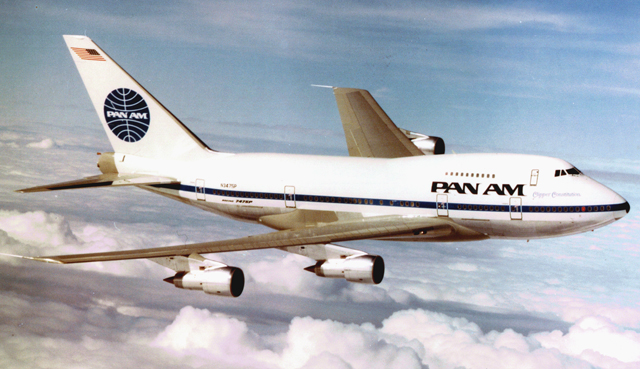 At the time of the 747's ­introduction, Pan Am's jet fleet ­totalled approximately 160 aircraft and during the first decade of jumbo operations, the number of aircraft declined as the airline shifted from an all-narrowbody portfolio to one that predominantly comprised ­widebody types.

During that time, Pan Am continued its close association with the airliner it created, both in the good times and the bad. In September 1973, the airline placed the first order for the 747 Special Performance. The SP was a short-fuselage, ultra-long-range 747 ­derivative designed to counter the big trijets developed by Lockheed and McDonnell Douglas. Unfortunately, despite offering ­impressive city-pair route capabilities, the aircraft proved a little too niche and sales only reached 45.

Pan Am debuted the 747SP in March 1976, but a year later it had the misfortune to be involved in what remains the world's worst air accident, when two 747s (the other operated by KLM), collided on the ground at Tenerife, killing 583 people. Another of the airline's 747s was the target of a terrorist attack 12 years later, when a bomb downed Pan Am flight 103 en route from London to New York in December 1988.

But as graphic images emerged of the jumbo's severed nose lying on a Scottish hillside, the powerhouse that had led the march of international air transport was a shadow of its former self, having been a victim of the dynamics of US airline deregulation a decade earlier. Crippled by the lack of a domestic network, Pan Am purchased National Airlines in January 1980, which delivered a substantial US route system. But the influx of National aircraft caused the fleet to balloon and introduced equipment incompatibility in what proved to be a difficult marriage, and losses quickly mounted.

Five years after the National merger, Pan Am's Pacific division (both routes and fleet) was sold to rival United Airlines for $750 million and by January 1987, the whole business was up for sale.

In January 1991, it filed for Chapter 11 protection and during the course of the year, most of the rest of the business was sold off to United and Delta. On 4 December 1991, when Pan Am folded, it still had 17 747s in its fleet as a momentous, inspirational and sometimes tragic story of one of the world's greatest airlines finally ended.