China has been vocal about its aerospace ambitions, and Comac bears the weight of that dream on its young shoulders. Embossed on a giant rock at the entrance of its Shanghai facility is the phrase “to let China’s large aircraft soar into the blue skies”. This, and much else about Comac, make China’s resolution clear.

Despite critics’ views about its ARJ21 regional jet, Comac employees have gained confidence since the much-delayed aircraft entered service in June. The majority of those involved in the regional jet have moved on to the C919 narrowbody programme, with a clearer understanding of the tasks and challenges ahead – simply because they have done it before.

Since rolling out the first C919 prototype last November, Comac has gone to work with an aim of getting the aircraft flying in 2016. Progress on systems integration and static tests suggest the maiden sortie will not occur this year, per the current plan, but move to early 2017, perhaps before the lunar new year.

When it rolled out the jet in a ceremony attended by the country’s top politicians, airline bosses and aviation regulators, Comac said that all major systems were installed and the aircraft was ready to start ground tests. The reality was that much more needed to be done.

Large sections of aircraft 101 had to be taken off in the past year – including its CFM International Leap-1C engines, control surfaces on the trailing edge of the wing, leading-edge flaps, elevators and landing-gear doors – for work to be done on the jet, as well as on various systems.

When FlightGlobal visited Comac’s final assembly hall near Shanghai Pudong International airport in early September, however, the aircraft was again taking shape. There was a buzz of activity, with at least 20 employees on the jet, installing air-conditioning ducts, inspecting the wings and fixing wiring.

The aircraft was in near-complete form, with its tail, horizontal stabilisers, wings, winglets and nose cone attached. Although it was still supported by pneumatic jacks, both the nose and main landing gear was installed, as were its doors and windows. While the engines were yet to be attached, their pylons had already been fixed.

Inside the aircraft, cable harnesses lined its frame but there was still a temporary wooden floor underfoot. The flightdeck and test equipment was also not yet installed.

Aviage Systems chief executive Alan Jones told FlightGlobal in early September that the mechanical and power systems had been installed on the aircraft, with the avionics system to be put in next.

“We’re at the stage now where the mechanical, power, propulsion and avionics systems are all being tested on the aircraft... It’s a process that takes about two months,” he said. “We call that the on-aircraft test procedure and it is the initial phase of power-on.”

Aviage is a joint venture between GE Aviation and Chinese aircraft manufacturing giant AVIC. It provides a number of systems for the in-development narrowbody and is also helping Comac with the critical work of systems and subsystems integration.

Jones says the full power-on event is on track for the end of this year, adding: “What I’m hearing and seeing is that there are no technical issues that have derailed this power-on process. It’s all about the speed of integrating the systems, getting through the trouble-shooting activities.”

Over at the avionics test lab, State Key Laboratory of Civil Aircraft Flight Simulation deputy director Lu Qing and his team are working through the third loop of software integration, which should be ready to support the narrowbody’s first flight.

The avionics are integrated with aircraft systems in the lab, with the software then loaded on to the aircraft. With every loop of integration, issues and bugs are identified, and then corrected with the help of suppliers.

It is also necessary to link the electrical system with the avionics and the mechanical systems on the aircraft, to ensure that the three work seamlessly together.

“This test result will be able to support the majority of first flight work,” says Lu, who declined to say whether he expected first flight to take place as scheduled by the end of the year. 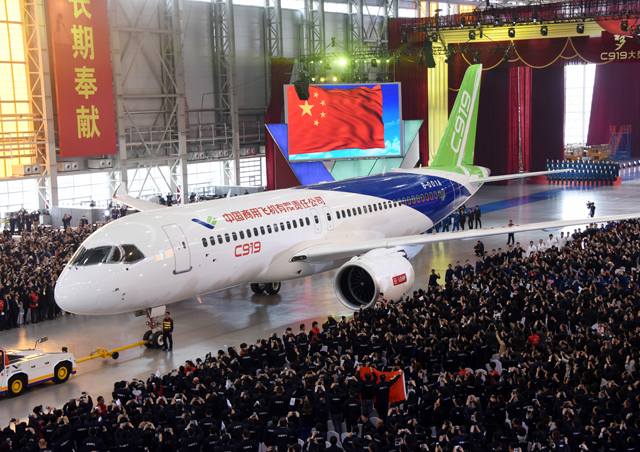 The Chinese airframer, however, disclosed that static strength tests for the C919 are slightly behind schedule, although the team is still on track to complete the required tests by the end of 2016. This will give an indication of whether the first flight can go ahead.

“I’ve split things into three stages. First is the tests we need to do before first flight; after that the limit loads; followed by exploratory experiments,” he tells FlightGlobal at AVIC’s new strength research institute in Shanghai, just a stone’s throw from Comac’s final assembly centre.

Asked about the test outcome so far, Zhao says the results “are acceptable”. He is focused on using these examinations to verify the resilience of the aircraft structure and components. “Once we are able to do that, we will report it to the headquarters and tell them that the aircraft is ready to fly.”

When FlightGlobal visited the facility, the ground-test jet was undergoing tests related to its landing gear. The unpainted fuselage had wings and its vertical stabilisers attached.

To speed things up, Zhao says static strength tests on movable aircraft parts are being done in Xian, while the main airframe undergoes tests in Shanghai.

He explains that while the aircraft was handed over to the facility in April, there were still “bits of unfinished work” that had to be completed. An example is how modifications needed to be made to the aircraft to enable the installation of loading devices. The team had to “tie up loose ends” in manufacturing, while conducting tests concurrently. This has since pushed static strength test progress back from the previously targeted October completion.

“Our latest plan is to finish the tests by the end of the year. We need to complete the tests a month before first flight, conclude our experiments and make a report to the chief designer,” says Zhao.

While the current focus is on getting the aircraft airborne, Comac understands that a successful first flight is but a milestone. The ARJ21 first flew in 2008, but had to fly more than 5,000h – double the typical time a programme takes – before it was certificated by the Civil Aviation Administration of China (CAAC) six years later.

Flight Ascend Consultancy’s Richard Evans says Comac needs to show that the first flight “is not just a one-off”, but follow it with subsequent flights as part of a structured certification programme.

“Comac’s priority is to demonstrate a shorter certification programme, but ultimately avoid the sort of issues the ARJ21 still seems to be enduring,” he adds.

While Comac is working more closely with the CAAC on the 156-seat C919, it has yet to get any Western agencies involved. The US Federal Aviation Administration’s reluctance to certify the ARJ21 has led Comac to favour European Aviation Safety Agency certification for the C919, sources say.

Western certification is, however, not a top priority, since the majority of the company’s more than 500 commitments for the C919 are from Chinese airlines and leasing companies.

One industry player says: “It’s not important now for Comac to think about Western certification. If it can manufacture and deliver the aircraft on order, the US FAA and EASA cannot ignore it.”

Comac also has other priorities at hand, including optimising its ARJ21 and going deeper into its planned widebody joint venture with Russia.

The journey has been far from easy. In addition to the political task of developing a technologically advanced aircraft, Comac has also had to bring local suppliers, many of which are inexperienced, into line. In addition to being on a steep learning curve itself, Comac has had to deal with novice suppliers.

Comac was set up in May 2008 with key businesses drawn from the state-owned conglomerate AVIC. This followed a 2007 government decision to develop China’s first large passenger aircraft.

Western suppliers that worked on the ARJ21 say Comac learned valuable lessons from its long and tedious journey on the regional jet programme. Before the ARJ21, it did not even know how to provide suppliers with basic quotations and defined specifications, nor understand certification processes. Experienced suppliers had to step up and guide it along.

“The ARJ21 is flying, which is a great outcome. The C919 has gone through a number of delays but it’s going to be a quicker and smarter process. Comac is taking each cycle as a learning opportunity,” says Aviage’s Jones.

Comac is also a very young team. About 75% of employees are under the age of 35, although a good number of them gained experience on the ARJ21. When it was established in 2008, the majority of its employees were either fresh out of education or close to retirement. It has since hired experienced staff and also foreign talent to fill the gap and mentor their younger colleagues.

What the young team lack in experience, they make up for in pride. Comac employees share the country’s vision of having Chinese aircraft flying passengers all over the world. Many have been with the company since its formation, and offer few complaints about the long hours and shifts demanded by the country’s aeronautical push.

“Comac has a golden opportunity with the huge market and government backing. It has all the keys to be successful,” says one source, succinctly.