ANALYSIS: Duncan gears up for the ADS-B rush

Over the next 14 months, Duncan Aviation expects to be helping dozens of operators win a race against time. A Federal Aviation Administration mandate that all aircraft flying in certain controlled airspace in the USA must be fitted with Automatic Dependent Surveillance-Broadcast Out (or ADS-B Out) technology comes into force on 1 January 2020. The maintenance, repair and overhaul provider is anticipating that its three main sites will be full for the next 14 months as owners of older aircraft rush to beat the deadline.

In August, a survey by the Lincoln, Nebraska-based firm – a regular exhibitor at the NBAA convention – claimed that around 14,000 aircraft, some 52% of the installed fleet, still did not comply. Although Duncan expects that up to a fifth of these owners will not bother with the upgrade and instead retire their aircraft, it still leaves potentially many thousands of aircraft for Duncan and other MRO houses to accommodate in a little over a year.

Finally, however, many of those operators are realising that time is running out. According to Mike Minchow, Duncan’s vice-president of sales, “the mentality [among owners] has shifted and the wave has started to hit”. He adds: “It took us eight and a half years to get to 48%. I suspect up to 20% [of non-compliant aircraft] will be retired after the mandate takes effect and go to the boneyard, but it still leaves lots of high-dollar, large-cabin and super-midsize aircraft whose owners will want them to remain legal in 2020.”

Get all the latest NBAA coverage on our dedicated event page

Minchow says many of Duncan’s shops are “booked out into the first quarter”, and waiting times for the roughly 10-day turnaround to have equipment brought up to standard are running at three or four months. It is not about hangar space being limited – rather there is a lack of manpower. “Everybody in the industry right now is fighting for labour,” says Minchow. “Even if all the non-compliant aircraft were all lining up now, there will still be aircraft grounded after the deadline. We expect to be doing this work well into 2020.”

While ADS-B contracts will take up much of Duncan’s time during the next year, the family-owned MRO, which celebrated its 60th birthday last year and whose current chairman’s grandfather founded the firm as an aircraft sales specialist, has much else on its to-do list. In January, it will open its third full-service facility, in Provo, Utah, joining its existing bases in Lincoln and Battle Creek, Michigan. The Provo site will have two 4,200m2 (45,000ft2) hangars to serve customers on the West Coast and over the Pacific, says Minchow, and will specialise in Bombardier and Embraer.

In addition, the company operates a network of 26 satellites, focusing mainly on avionics. These sites range from hangars – its largest, in Houston, Texas, employs 17 – to shops with two employees, based at an FBO. Another activity Duncan offers remotely is engine rapid response maintenance, with 36 mobile technicians based from home or in a shared facility, with coverage spanning the USA and parts of Canada and Mexico. Duncan has authorisations from “all the major OEMs”, says Minchow, with the exception of Textron. Honeywell is a key partner in Lincoln, with Duncan recently expanding its HTF7000 capabilities there. 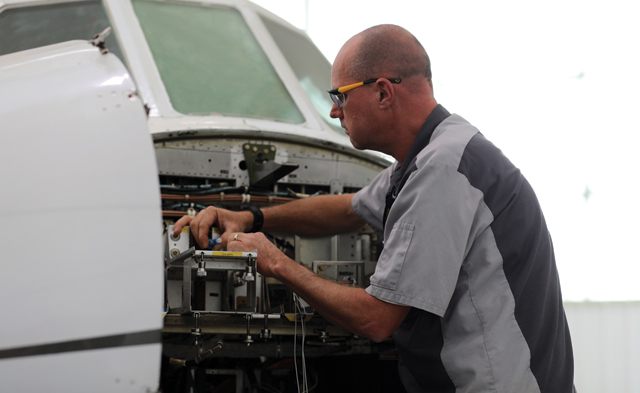 While Duncan has no “overseas bricks and mortar”, foreign-based customers account for up to a fifth of its revenues, with parts sales a particularly significant operation. The company employs international representatives in Brazil, Europe, Mexico and Australia, and has customers as far away as China. “We’ve seen a real resurgence in our European business in recent years,” says Minchow.

The company has also moved increasingly into developing its own supplemental type certificates for modifications, in partnership with OEMs. In September, it announced that it had developed six STCs for the 4G-based Avance L5 connectivity system from Gogo, covering wi-fi certification and equipment and antenna installation on three Bombardier families: the Challenger 300 and 350 as well as the 600 series and the Global Express, XRS, 5000 and 6000. Also included are the Gulfsteam GIV, G300/350, G400, GIV, and G450, and the Dassault Falcon 900 and 2000 aircraft.

According to Duncan’s manager of completions/modifications service sales Nate Klenke, connectivity upgrades will remain big business for the business aviation MRO sector. “Duncan Aviation will continue to partner with innovators such as Gogo Business Aviation to develop paths for integration of inflight connectivity into the business jet fleet,” he says.

However, for much of the next year and a bit, much of the company’s focus will be on upgrading the cockpits of older jets to comply with the new FAA communications mandate. Its message at NBAA to any operators still not taking action is that they cannot afford to delay much longer, or they risk being grounded on 1 January 2020. “The windows are quickly closing,” it says.

To meet the minimum requirement for ADS-B Out, aircraft must be equipped with:

Duncan says owners can install a minimal ADS-B Out system to meet requirements of the rule, or they can integrate with “ADS-B In” avionics and displays to reap additional benefits like cockpit displays that show free traffic, weather and flight information.