The first flight of the Comac C919 narrowbody airliner on 5 May was a clear reminder of China's aerospace ambitions. The 158-seater will face certification challenges, and will not be the most advanced of jets, but it will give China valuable knowledge and experience as it strives to join the big leagues of aircraft manufacturing and export.

While the AVIC MA60 turboprop is China's only commercial aircraft export at the moment, the Chinese aerospace industry aims to offer a full range to serve all market segments. AVIC is developing the MA700 – a larger, more advanced turboprop – and Comac is busy delivering ARJ21 regional jets to launch customer Chengdu Airlines. Further up the size scale, as Comac embarks on the C919 flight-test campaign, it has also tied up with Russia to develop a widebody.

More details about the Sino-Russian widebody could emerge at the 2017 Paris air show, where Comac will also have a strong presence as it seeks to extend its reach beyond its home territory.

So, if all goes to plan, China will have offerings from 70 to 280 seats. But to be a truly successful global aircraft player, it still has some way to go.

While the MA60 entered service with Sichuan Airlines 17 years ago, it has had limited success both at home and abroad. Flight Fleets Analyzer shows that most of the 60 MA60s in service are operating with two Chinese carriers: Joy Air and Okay Airways. A further 24 of the turboprops are used by local airlines or air forces in 11 developing countries such as Zimbabwe, Congo, Nepal and Laos.

This is unsurprising. Although China certificated the aircraft in 2000, neither it nor its improved version, the MA600, has received certification from the US Federal Aviation Administration or the European Aviation Safety Agency. This means AVIC can only sell the turboprop to countries that recognise Chinese certification.

The same problem persists with the ARJ21, which was certificated by the Civil Aviation Administration of China in December 2014 but has failed to receive a stamp of approval from the US FAA, despite a shadow certification programme. Some at Comac believe US reluctance to certificate the regional jet reflects a fear that the C919 programme is a threat to Boeing’s hold on the single-aisle market. Others say the Chinese product is simply below par.

Western certification is probably not critical for the success of the ARJ21, since it has orders for only 20 jets from four foreign customers: lessor GECAS, Thai operator City Airways, Myanmar Airways International, and the Republic of Congo's government. The City Airways order for 10 ARJ21s (and 10 C919s) looks doubtful; the carrier was shut down by the Thai government in early 2016. 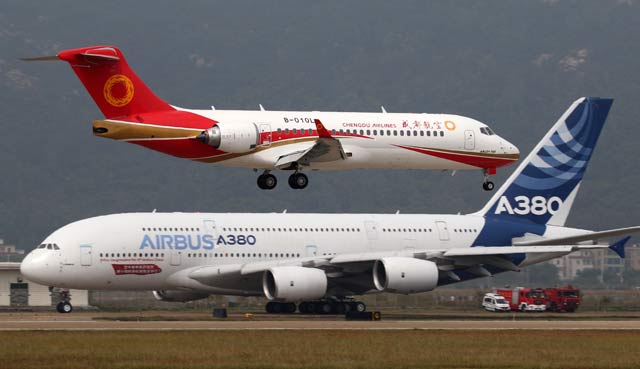 The ARJ21 regional jet is in service, but Comac faces a superjumbo challenge to break into global markets

The Chinese, however, know all too well that their products can find real success only if recognised internationally. Comac has thus approached EASA for type certification of the C919, signalling its intent to sell and market the aircraft internationally. EASA is working on the C919 approval, having visited its Shanghai facility to examine the manufacturing process.

Ray Jaworowski, senior aerospace analyst at Forecast International, says achieving EASA or US FAA certification is a prerequisite for an aircraft to break into Western markets, but by itself is no guarantee of success. He foresees the main market for the C919, ARJ21, MA60 and MA700 to be China and other countries in Asia, as most airlines in the West can be expected to stick with the established manufacturers.

"The pursuit of export sales for the ARJ21, C919 and the MA700 can perhaps be seen as stepping stones to future inroads by Comac and AVIC into the global commercial aerospace market, particularly in terms of forming partnerships with Western suppliers and establishing a sales, marketing and product support infrastructure," he adds.

Flight Ascend Consultancy's head of market analysis Chris Seymour believes China first needs to get its aircraft into commercial service with local airlines and demonstrate "reliability, competitive utilisation figures and maintenance intervals", before it even attempts to market its aircraft to "blue-chip customers".

For operators concerned about the quality of Chinese aircraft, Flight Fleets Analyzer tells a story; there are 30 MA60s in storage and the type has been involved in 15 accidents since 2009 – five of which were total losses. The most serious was a 2011 accident with Indonesia's Merpati Nusantara Airlines, which killed all 25 people on board. The aircraft was operating between Sorong and Kaimana, and attempting to land in bad weather, when it crashed. Investigators later attributed the accident to the crew's failure to adhere to standard operating procedures, and a loss of situational awareness.

The pilots were found to have been inexperienced with the MA60 and also failed to conduct an approach briefing and landing checklist. Alarmingly for AVIC's international sales ambitions, investigators also pointed to the use of non-standard aviation English in both the flightcrew operations and aircraft maintenance manuals.

Two years later, another Merpati MA60 was damaged in a hard landing at Kupang's El Tari airport, and investigators found a discrepancy between the manufacturer's flightcrew operations manual and the carrier's approach checklist that may have led to the left power lever being put in beta range, generating significant drag when the aircraft was on final approach. The incident led Indonesia to order a "special audit" of all its MA60s, and the type has since been grounded in several countries.

Myanmar's civil aviation department grounded the MA60 after two accidents within a month where the aircraft skidded off the runway. Even China grounded the type, in 2014, after a malfunction in an Okay Airways landing gear indicator system.

Thereafter, the Chinese regulator issued three airworthiness directives, calling for a revision of the MA60 flight manual to include the replacement of the front landing gear lock-up and lock-down parts on turboprops that had accumulated 6,400 or more take-offs and landings. CAAC also called on all operators to inspect the aircraft's landing gear indicators.

Of the in-development MA700, AVIC says it will marry the best qualities of the market-leading ATR 72 and Bombardier Q400: a maximum take-off weight of 26.5t and a maximum range of 1,460nm (2,700km), optimised to serve markets within an 800km radius. The schedule calls for first flight in 2018 and CAAC certification in 2020.

Asked if the type will seek Western certification, AVIC deputy general manager Zhang Xiaohong says: "When our aircraft [the MA60] first entered the market over 10 years ago, everybody's view is that the US FAA certification is critical... If you can't get FAA certification, you can't sell it around the world. The reality is that we've already passed that barrier. Now our aircraft is in 18 countries, across four continents and 33 operators."

He adds that the priority, instead, is for potential operators' local aviation authorities to recognise CAAC certification of Chinese aircraft.

With a population close to 1.4 billion and steady expansion of air travel, China has a home market where airlines are nudged to do the patriotic thing and support local products – but every programme is seen as a stepping-stone towards a global market impact. C919 vice chief designer Fu Guo Hua says: "We are fully using what we have learnt from the ARJ21. In terms of planning, the top management has made the effort not to repeat the mistakes that we made on the ARJ21. We don't rule out new issues cropping up on the C919 since it's a different-generation aircraft with different certification requirement and standards. But I believe that its flight-test and certification journey will be very different from the ARJ21's."

Seymour believes that the C919 and MA700 programmes should have the objective of international sales – which will be the only way to continue to develop the Chinese industry and get footholds and acceptance in international markets. "This will require investment and expertise but must be a long-term goal," he says. "It will likely be the next Chinese products, in the 2030s, which can be more internationally competitive."