Saab is set to increase the intensity of its Gripen E flight-test programme over the coming months, with the trio of aircraft supporting the activity to be increased to eight before year-end.

By mid-May, Saab’s first two Gripen E test airframes – 39-8 and 39-9 – had been flown for a combined 125h, with their work having previously been supported by a Gripen Demo platform, used from 2008. Its third and last dedicated E-model test asset, aircraft 39-10, took to the air for the first time on 10 June from the Swedish company’s Linkoping site.

Eddy de la Motte, Saab’s head of business unit Gripen E/F, says the programme’s first four production aircraft are now in final assembly in Linkoping, including lead examples for its current two customers for the type: the Swedish and Brazilian air forces. Both services will receive their first aircraft before year-end to support their initial test and evaluation processes.

In addition to adding production examples to its test programme, Saab is also set to return its Gripen Demo, or 39-7, platform to use, after the completion of an extensive modernisation activity. De la Motte says the heavily adapted Gripen B now features full E-model tactical functionality in its rear cockpit, which has also been equipped with the AEL Sistemas-produced wide area display that will be installed in all examples of the new-generation type.

“We will use it as a flying rig, to test new functions, and also for customer demonstrations”, he says of the asset.

Despite three examples having been flown, the Gripen E will not be making a debut appearance at the Paris air show. Instead, Saab’s focus is on meeting its first delivery commitments for Sweden and Brazil, and on ramping up series production of the type. With a combined 96 examples due to enter operational use from around 2023, an annual rate of 24 units must be swiftly established. Additional export sales could prompt the company to add further capacity, however.

Saab is meanwhile also nearing a crucial deployment in support of a Swiss fighter contest, where it faces rivals in the shape of the Boeing F/A-18E/F Super Hornet, Dassault Rafale, Eurofighter Typhoon and Lockheed Martin F-35A. The company has not confirmed which of its test assets will be sent to Payerne air base for the evaluation, and de la Motte notes: “It’s challenging to demonstrate a 2025 Gripen today”.

Switzerland’s previous selection of the Gripen to replace its air force’s Northrop F-5 interceptors was thwarted by a public referendum. For the new process – which will also select a successor for Bern’s F/A-18C/Ds and replace its ground-based air-defence infrastructure – the Swedish contender has offered to supply either 30 or 40 E-model fighters.

At the time of FlightGlobal’s visit to Linkoping, test aircraft 39-8 was undergoing structural inspections, having logged 100h airborne since its debut in June 2017. The asset has so far been focused on supporting flight-envelope expansion, stores separation and loads testing, along with fuel and environmental control system checks.

“So far it’s really reliable and doing what’s expected,” says Saab test pilot Marcus Wandt, who was the first to fly the new model. “We want to make sure it’s the same on the inside,” he adds.

“The handling is very comparable to the Gripen C/D, but you can pull more g in the middle of the envelope,” Wandt says. Despite the E’s larger size, “the agility is still there,” he says, with carefree handling throughout the flight regime.

Aircraft 39-9 is being flown with a full electronic warfare system and Leonardo-supplied Raven ES-05 active electronically scanned array radar in use, with Saab reporting strong results.

“This aircraft is built for a very different environment, with complex electronic warfare, long-range systems and an adversary with a lot of advanced equipment,” Wandt says.

In addition to external stores testing conducted at Sweden’s Vidsel range last year, which culminated with separation of Diehl Defence IRIS-T air-to-air missiles, other recent highlights have included maximum rate climbs and dives and recording the fastest-ever speed by a Gripen. Saab declines to reveal the performance achieved. 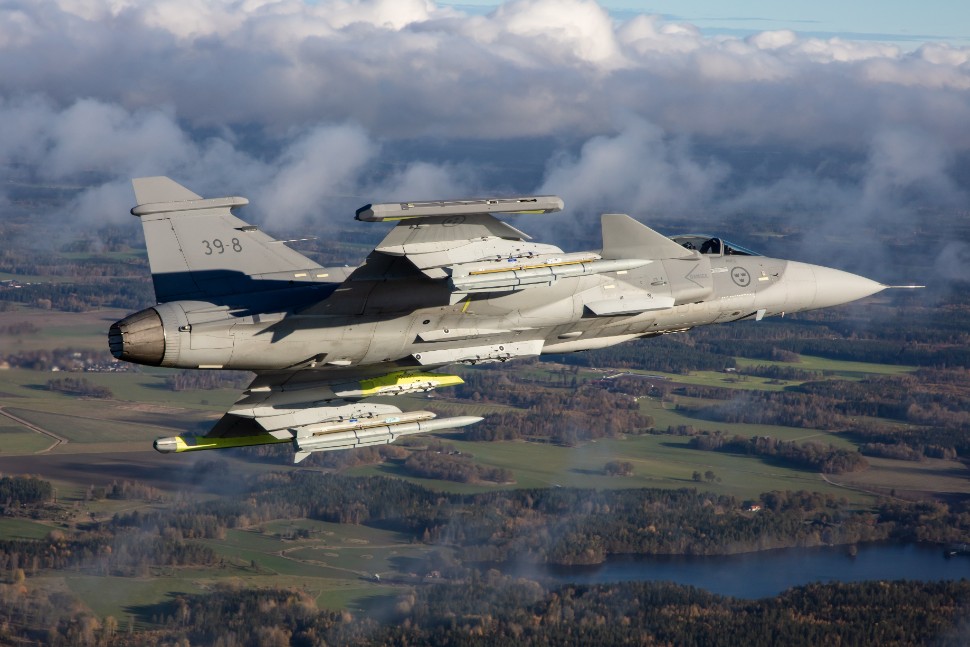 As the Swedish air force draws closer to receiving its first example, it is already eyeing the potential for a follow-on purchase to its initial 60-aircraft deal.

“We want to have 60 Es,” says Colonel Anders Person, the service’s commander air staff, referring to details contained within a recent white paper published by the nation’s defence committee outlining spending priorities for the five-year period concluding 2025. This proposed also retaining some of its existing 95 C/D-model examples longer than previously planned, to provide “the core of the fighter aircraft system” as the new model enters frontline use.

“At some point after 2030 we’d like to buy another 60 Es, to replace the C/Ds,” says Person. The new type’s high level of operational promise is not lost on the Swedish air force, which – having referred to its current Gripen by using Saab’s “smart fighter” branding – labels the coming standard as “(E)ven smarter”.

Indeed, Person says, by 2035, the air force hopes to have increased its strength to eight active Gripen squadrons: up from five today and six in 2025.

“We need now to make an analysis by the defence forces and authorities which are working on materiel questions,” says Swedish defence minister Peter Hultqvist of the defence committee’s recommendations. This activity should take around six months to complete, after which the nation’s parliament must vote on the required investment required to support any increase in defence spending.

“The best we can do is to have defence decisions on a solid ground – we need to do as solid a job as we can,” Hultqvist says.

Brazil also holds the potential for further business, Saab believes. The nation has so far ordered 28 single-seat Gripen Es and eight two-seat F-model examples, but is believed to have a need for a further two similar batches. Saab is working closely with Brazilian airframer Embraer on the project, covering a gradual transition of assembly to the Latin American country.

A new company, Saab Aeronautica Montagens – 90% owned by the Swedish company and 10% by Brazil’s Akaer – is to manufacture major structures in Brazil, including the forward and rear fuselage, tail cone, air brakes and wing box. Established in Sao Bernardo do Campo, the company currently employs 45 people, and will commence full operations during 2020.

Meanwhile, work on Brazil’s F-model variant continues at the Gripen Design and Development Network facility in Gaviao Peixoto, where 90 Brazilian and 17 Swedish engineers are currently employed.

Having come into effect in October 2015, the export buyer’s roughly SKr39.3 billion ($4.5 billion) contract remains on track, says Michael Franzen, Saab’s head of business unit Gripen Brazil. The customer’s first aircraft has achieved power-on, and after initial tests in Sweden will be flown to Brazil next year to support an evaluation process likely to total around 800h in the country.

Initial operations with the locally designated F-39 will commence from Anapolis air base during 2021. In all, 13 of the air force’s new fighters will be assembled in Sweden by Saab, with another eight to be completed in Linkoping by Brazilian personnel; the remaining 15 will be delivered from Embraer’s Gaviao Peixoto plant. Its first F-model example is scheduled to make its flight debut in 2022, with this featuring a 45cm fuselage extension.

Franzen indicates that a possible future Gripen sale to Colombia could be achieved by “a mix of production in Sweden and Brazil.”

In addition to its current opportunity in Switzerland, Saab is also pitching the Gripen E as a potential solution for Canada’s future fighter needs. At last month’s CANSEC show in Ottawa, the company outlined its willingness to explore in-country assembly of the single-engined type, should it gain selection by the Royal Canadian Air Force.

Sweden is also eyeing an opportunity to sell Gripens to the Finnish air force, at a time when Stockholm and Helsinki are considerably strengthening their defence co-operation. Hultqvist describes the prospect of such a deal with its Nordic neighbour – which currently flies F/A-18C/Ds – as “important to us”. India also remains a sales target for the Swedish airframer, as well as multiple other opportunities in Europe and Asia.

Saab chief executive Hakan Buskhe once spoke of a target to conclude a new Gripen sale every 18 months – but he today stops short of such objectives, due to the time needed by nations when deciding on a new fighter capability that is likely to serve them for 30 years. Indeed, with so many sales prospects now on the company’s radar, he notes: “The good way to sell more is to deliver on time”.

In common with its Gripen E fighter, another of Saab’s new product offerings – the GlobalEye swing-role surveillance system – is also approaching its first delivery, to the United Arab Emirates (UAE) air force.

Launched at the Dubai air show in November 2015 with a surprise two-aircraft order, and subsequently expanded to add a third example, the GlobalEye has undergone extensive testing since a lead platform (9714) made its debut flight in March 2018. This was followed by aircraft 9743 in January, while the last – 9787 – is likely to get airborne for the first time late this year, following the completion of modification work at Saab’s Linkoping site.

Speaking in Stockholm on 20 May, Buskhe revealed “April next year” as the expected handover date for the first of the UAE’s Bombardier Global 6000 business jet-based air, ground and maritime surveillance assets. The Swedish company has already handed over some of its associated equipment, including systems for training, planning and post-mission evaluation.

The programme’s lead aircraft has been involved in extensive flight testing performed from Granada, Spain, since last September, with this activity including envelope expansion work. European Union Aviation Safety Agency pilots have also flown aboard the aircraft in support of a process that should soon culminate with Swedish authorities approving a supplemental type certificate for the adaptation.

“It behaves very much as the VIP version of the Global 6000, which we are happy with, because we have done substantial changes to this platform,” says Lars Tossman, Saab’s head of radar solutions.

Aircraft produced for the UAE have five onboard operator stations, with the aircraft offering an endurance of 11h.

Future customers for the GlobalEye system – which might not require the full swing-role capability sought by its launch customer – will receive adapted Global 6500s, due to Bombardier’s evolution of the long-range product. The new model features more powerful Rolls-Royce Pearl engines and some aerodynamic enhancements. Tossman says this change will require some further flight testing to be performed, but that “for us it doesn’t have a difference: it’s the same [type] certificate.”

Saab also has previously proposed a dedicated maritime surveillance derivative of the platform named the Swordfish, which would feature around 70-80% commonality with the GlobalEye, and is prepared to launch a full development activity if a buyer gets on board.

Pointing to the company’s flagship surveillance offering, Tossman concludes: “We think we have a really good solution, because we have a fantastic radar and a fantastic mission system.” 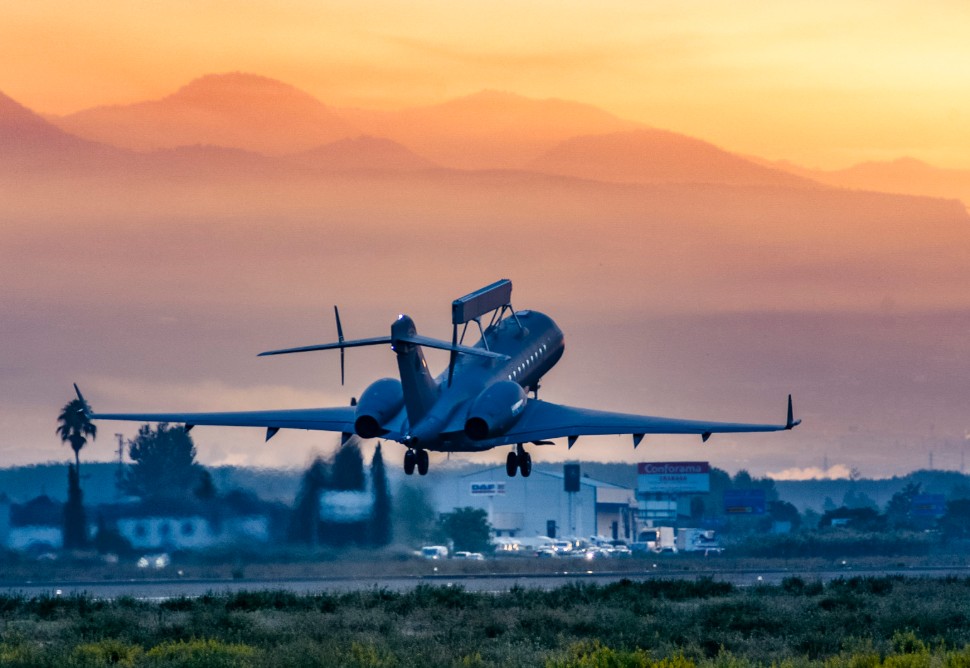