Light-attack aircraft come in many forms: purpose-built turboprops such as the Embraer A-29, converted turboprop trainers like the Beechcraft AT-6 and Korea Aerospace Industries KT-1, and even jet-powered trainers modified to carry weapons and surveillance equipment.

Then there is the most unlikely story of them all: the AirTractor AT-802 and Thrush 710. These almost identical, tail-sitting cropdusters are now operating as light combat aircraft in several countries in the Middle East and Africa. They are American-built aircraft sold exclusively to foreign countries without – so far – a US military customer or sponsor.

And they have even spawned a fierce global rivalry, with the competing options – the Iomax Archangel and L3 Technologies Longsword – put on display at events such as June's Paris air show, where they are lined up alongside the Dassault Rafale and Lockheed Martin F-35A.

Despite the unlikely route into the global arms trade, demand for the armed cropdusters is growing quickly.

As the established leader in the market, Mooresville, North Carolina-based Iomax is ramping up production. After reaching a steady pace of two Thrush 710-derived Archangel deliveries per month, Iomax chief executive KC Howard expects to increase that to four deliveries per month by mid-2018 to meet forecast demand. 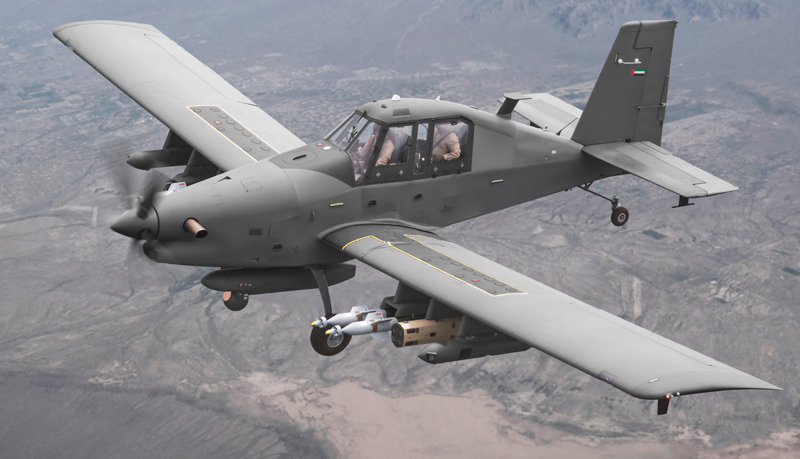 For the United Arab Emirates, the aircraft is useful for border patrol, and also equipping allied air forces

It is a stunning growth rate for a 17-year-old company that entered the aircraft modification business only eight years ago, with a proposed light-attack modification kit for the AT-802U.

As suggested by the company's title – the acronym for "input/output" forms the first two letters – Iomax began as a small defence electronics company. Specifically, it started out supplying signals intelligence and cyber applications to the US military and other US government customers that remain undisclosed.

"That ran from 2001 to 2012 or the beginning of 2013," Howard says. "But Iomax became interested and engaged in the aviation market specifically as it relates to these aircraft in 2009."

That is when the original company founder – KC’s father, Ron, who died unexpectedly in June during a business trip to Washington DC – saw the potential opportunity to adapt the powerful class of AirTractor and Thrush cropdusters for the light-attack market.

The idea seems obvious in retrospect, but appeared quite eccentric at the time. Not every country wants or needs a sophisticated flying platform for the light-attack mission. In environments where no aerial threats are present, the agility of an aircraft designed to prepare military jet pilots or carry out aerobatic manoeuvres is not necessary. Instead, some militaries would prefer a rugged, stable platform that can host a surveillance camera, multiple rockets and bombs, and enough fuel to remain on station for several hours. In the aviation world, a turboprop-powered cropduster uniquely responds to all of those requirements.

“It's clever, it’s rugged,” KC Howard says. “It’s cost-effective both from cost of acquisition and cost to operate – below $1,000 per flight hour – when you're looking at this and looking at building many of these aircraft, dozens and dozens and dozens. You can buy 12 of these for close to one [Lockheed] F-16 or an F-35. Just look at the numbers.”

The trouble for the late Ron Howard was getting the project off the ground with a launch customer. The easiest path to selling controlled exports overseas is to participate in the Foreign Military Sales system. Direct sales of weapon systems to foreign customers without a previous US government contract are rare, and history is littered with programmes that tried without first selling to the US Department of Defense, including the billion-dollar failure of the Northrop F-20 programme in the mid-1980s.

Iomax entered the market in 2009 just as the US Air Force found a new enthusiasm for the light-attack mission. But the USAF did not allow the AT-802 to compete for the light attack system (LAS) programme – which was eventually awarded to a Sierra Nevada bid based on the A-29 Super Tucano – as it had stipulated an aircraft equipped with ejection seats.

Lacking a US government sponsor, Iomax found a patron in the Middle East. The United Arab Emirates government acquires a wide variety of military aircraft; some for its own use and others to donate to allies with fewer resources.

The deal required the UAE to work “with us to first of all understand it does not have to be in the USAF inventory prior to them ordering it. That was a huge hurdle to get over,” KC Howard says, adding: “I think it's a misnomer than any aircraft that we would be able to export to our allies would first have to be operated by the US government.”

In this case, the exception perhaps proved the rule.

The UAE has a network of allies that it supports, and the Archangel became a key tool in its border patrol system, as well as its foreign policy.

The government in Abu Dhabi initially acquired four AT-802Us built in Texas by AirTractor and modified by Iomax in Mooresville. The agricultural chemical tanks were removed to carry the Archangel’s extra fuel and sensors. The cockpit structure was strengthened with ballistic armour. And hardpoints were installed, allowing the wings to carry weapons wired into the cockpit’s new targeting systems. 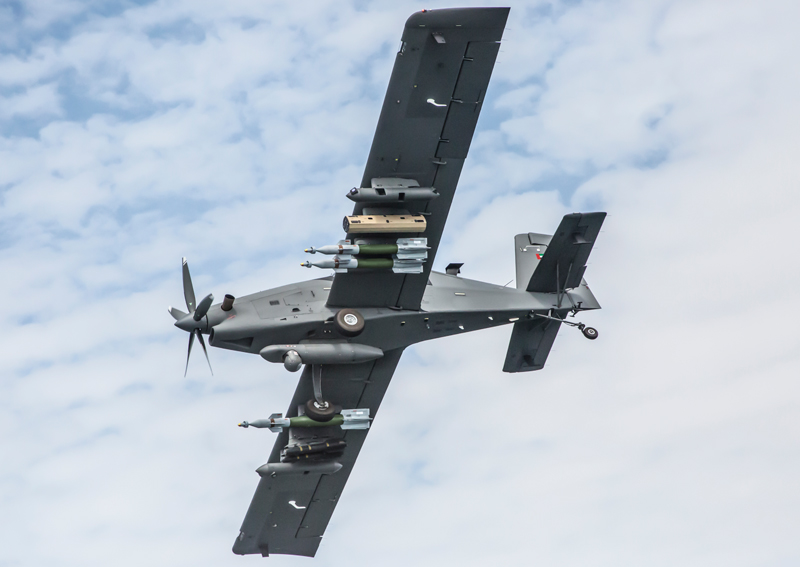 Armoured cockpit, plus an ample arsenal

After acquiring these four AT-802Us, the UAE signed a follow-on contract with Iomax for 24 Archangels, but switched platform to the Thrush 710: the marketing brand certificated with the US Federal Aviation Administration as the Thrush SP2R 660.

Iomax delivered 24 Thrush-based Archangels to the UAE in what Howard calls a Block 1.5 configuration. Most of these were gifted by the UAE to allies, including 12 to Egypt and several to partners fighting rebels in Yemen.

Another follow-on order by the UAE for 24 Archangels funded a Block II upgrade programme.

“We made some pilot interface modifications inside the cockpit,” Howard says. “We’ve got an escape capability inside the cockpit – a more efficient egress solution. It’s not an ejection seat. We also went to great lengths to reduce the weight of the aircraft, knowing these guys would rather carry more fuel and more munitions." This resulted in the company reducing the weight of the Block II aircraft by nearly 295kg (650lb), he adds.

The upgrades are available as demand grows for the Archangel’s capability.

“We see again, probably within the next six to nine months, doubling the number of customers we have for this,” he says. “We've been on the cusp of that for the last 12 months.”

As new orders are signed, Iomax is looking to make the Archangel even more capable, including via a potential Block III configuration and, in the distant future, a new variant of the Thrush platform with tricycle landing gear.

The lack of an ejection seat is one of the key obstacles for Iomax’s effort to sell the Archangel to the US military. After blocking Iomax from competing for the LAS deal several years ago, the USAF also made an ejection seat a requirement for candidates for an ongoing demonstration called Combat Dragon III.

Under the evaluation, originally named “OA-X”, the USAF wants to analyse how three aircraft – the A-29, AT-6 and Textron AirLand Scorpion – perform the light air support mission, which includes attack, close air support and training roles.

“We certainly think that our solution – based on its success it's had for the last seven years – we think there's an opportunity,” Howard says. “It's something we would always be open to. We would love to be able to support the US as well.”