Bombardier is to transfer completions activity for Global 5000 business jets from Montreal to its US facility in Wichita, Kansas, by mid-2018, to free up capacity for its in-development Global 7000.

About eight Global 7000 customer aircraft are in production at Bombardier's manufacturing plant in Downsview, Toronto, and the Canadian airframer is now starting to ramp up outfitting of the ultra-long-range type at its Dorval site in Montreal, in preparation for service entry in the second half of next year.

Wichita already houses manufacturing, final assembly and completion facilities for the Learjet 70/75 light business jet family. The site is also home to Bombardier’s flight-test centre, where the Global 7000 certification campaign is now in full swing. So far, four flight-test vehicles have amassed more than 900h, and they will soon be joined by the fifth and final example, which will serve as the entry-into-service validation aircraft. 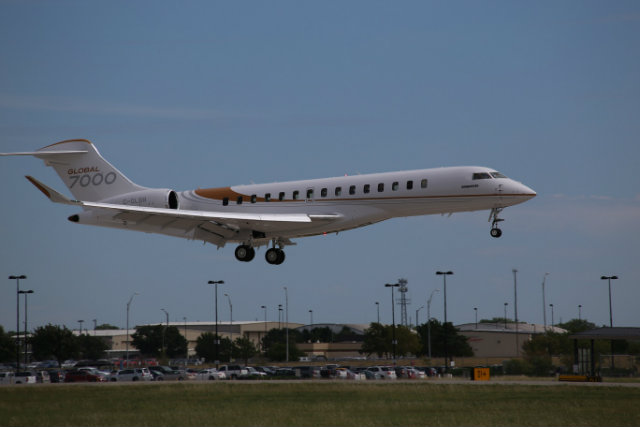 Bombardier says it is actively recruiting to fill about 1,000 new positions in Montreal over the next 18 months, including craftspeople, artisans and engineers. It recently designated the site as a “centre of excellence” for interior completions of the Global 7000 and has invested $65 million in the facility for “forward-looking production”.

Bombardier describes its flagship aircraft as “the largest purpose-built business jet in the industry” with a “well-appointed kitchen and four distinct living spaces”.

Speaking on a 2 November earnings call, Bombardier chief executive Alain Bellemare said the Global 7000 was sold out up to 2021, and customer interest in the model continued to grow.

Meanwhile, interior completions for the Global 6000 will continue in Montreal. The facility has outfitted 750 examples of the long-range business jet, and the smaller, shorter-range Global 5000, since the pair entered service in 1996 and 2005, respectively, says Bombardier.