Defence firm Almaz-Antey has destroyed an Ilyushin Il-86 cockpit in an attempt to prove that a Soviet-era weapon, rather than a modern Russian one, brought down Malaysia Airlines flight MH17.

Almaz-Antey produces the Buk surface-to-air missile system, an example of which was the source of the attack on the Boeing 777-200ER, the Dutch-led inquiry believes.

The inquiry identified the warhead as a 9N314M, carried by a 9M38-series missile, launched from the Buk transporter.

Almaz-Antey has carried out a series of tests, including the detonation of a 9M38M1 missile placed above and to the left of a cockpit section taken from an ex-Armavia Il-86. This is the same location derived by investigators for the position of the warhead that struck MH17. 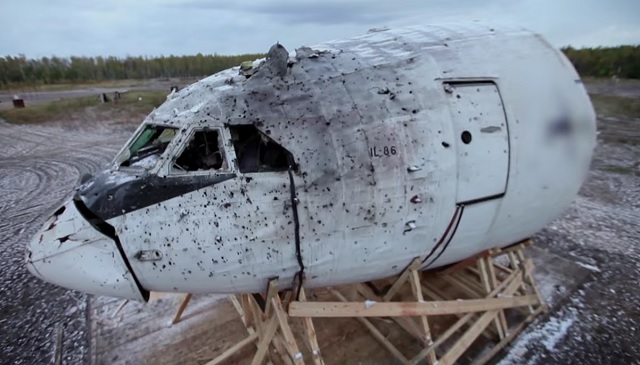 The defence firm says the test explosion was conducted at the Bakhirev engineering research institute in Nizhny Novgorod on 7 October.

It claims that the resulting concentration of damage to the Il-86 structure, and the types of warhead fragmentation shrapnel, differ to those inflicted on the 777.

Almaz-Antey says the damage indicates that an older 9M38-type weapon was used, one which is no longer in service with Russian forces but used by Ukraine’s armed forces.

It claims that there is a “high probability” that this “outdated” ammunition was involved in downing MH17, and adds that it believes the launch site was close to Zaroshchenskoye, west of Torez in Ukraine’s Donetsk region.